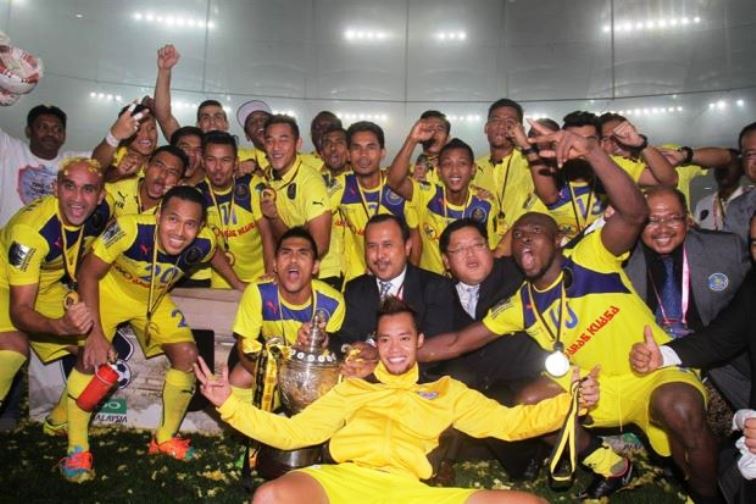 Coach Zainal Abidin Hassan had his head buried in his hands and could not bear to watch Hafiz Kamal take Pahang’s fifth penalty after Johor Darul Takzim’s national striker Norshahrul Idlan Talaha had miss his and JDT’s fourth kick which was saved by Pahang custodian Khairul Azhan in Saturday’s Malaysia Cup final at the National Stadium in Bukit Jalil.

Hafiz scored and Pahang won the lottery 5-3 to retain the prestigious Malaysia Cup in dramatic fashion on a night when the Elephants saw red after defender Saifulnizam Miswan was given the sack on 68 minutes. Saifulnizam was given the marching orders for punching JDT’s Amri Yahya in an off-the ball incident inside the penalty box. Referee Nagor Amir promptly sent the Pahang player for an early shower.

Extra time failed to find a winner with both teams tied at 2-2.

All looked lost for the Elephants when JDT scored two quick goals in a three-minute spell through Argentines Jorge Pereyra Diaz (31 minutes) and Luciano Figueroa (penalty 34 minutes) to wipe out Pahang’s 15th minute lead through Nigerian striker Dickson Nwakaeme through a rare header off a freekick by Azidan Sarudin.

It set the tone for an epic battle for the 100,000 fans who had packed the National Stadium to watch the final between two of the best teams in the M-League in the season ending finale which lighted up the Malaysian football scene in every home.

Perak-born Hafiz turned hero for Pahang as the defending champions turned the tide against the star-studded Southern Tigers who were hotly favoured to add the Malaysia Cup to the League Cup this year.

At the other end Norshahrul was turned villain when his weak spot kick was saved by Khairul Azhan – earning the wrath of JDT supporters who immediately took to the social media to condemn the Terengganu-born player..

While Norshahrul buried his head in his hands and cried unashamedly and had to be consoled by his teammates, Pahang players shed tears of joy to celebrate their third silverware this year, having already won the Charity Shield and the FA Cup..

It was In a dramatic final with Pahang scoring the equaliser just minutes after they were reduced to 10 players and it was the ever reliable Dickson Nwakaeme who hit the back of the net from a Damion Stewart set up – his second on the night after opening the scoring for the Elephants – on a night when Matias Conti gave a below par performance and was replaced on 77 minutes by Pakistani defender Zesh Rehman.

The numerical disadvantage failed to rattle Pahang and instead the East Coast giants were inspired to take the game into JDT who were playing without skipper Aidil Zafuan Abdul Radzak and influential flanker Nazrin Nawi because of suspension.

“The players were committed and showed fine teamwork in wanting to retain the (Malaysia) Cup. Their fighting spirit was second to none and this brought us success,” said Pahang coach Zainal Abidin Hassan.

“We made two glaring defensive mistakes and paid the price,” said Croatian who guided Kelantan to a treble in 2012 when the Red Warriors won the Malaysia Cup, the FA Cup and the League.