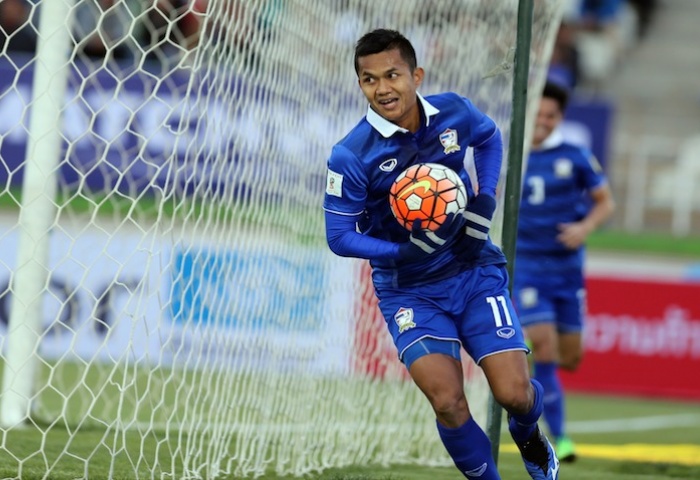 ASEAN champions Thailand made the third round of the 2018 World Cup qualifiers where their 2-2 draw against Iraq last night was enough for them to win Group F.

Only the eight group winners will advance to the third round of the 2018 World Cup qualifiers, as well as straight to the 2019 Asian Cup in United Arab Emirates, along with the four best runners-up.

Iraq made a blistering start at the PAS Ghavamin Stadium in Tehran but it was Thailand who took a 1-0 lead at the break when Mongkol Thosakrai headed home Theerathon Bunmathan’s 39th minute corner.

But the 2007 champions fought back with the equaliser in the 65th minute when substitute Mahdi Kamil fired in the rebound after Thai keeper Kawin Thamsatchanan had saved an initial shot.

With four minutes left on the clock, Theerathon again turned provider with a deep free-kick that was volleyed home by substitute Adisak Kraisorn as Iraq then stole a point from the tie off an own goal from Korawit Namwiset right at the end.

Thailand ended their campaign with 14 points while second-place Iraq moved up to nine – five clear of Vietnam – whom they will face in Tehran next Tuesday in an academic final fixture in four-team Group F.

The remaining four runners-up will progress to the third round of qualifying for the Asian Cup, along with all the third-placed teams and the four best fourth-placed teams.

The remaining sides, which will include Chinese Taipei who finished bottom of Group F after five consecutive defeats, will have to negotiate past two rounds of playoffs for one of the final eight spots in the Asian Cup third qualifying round.