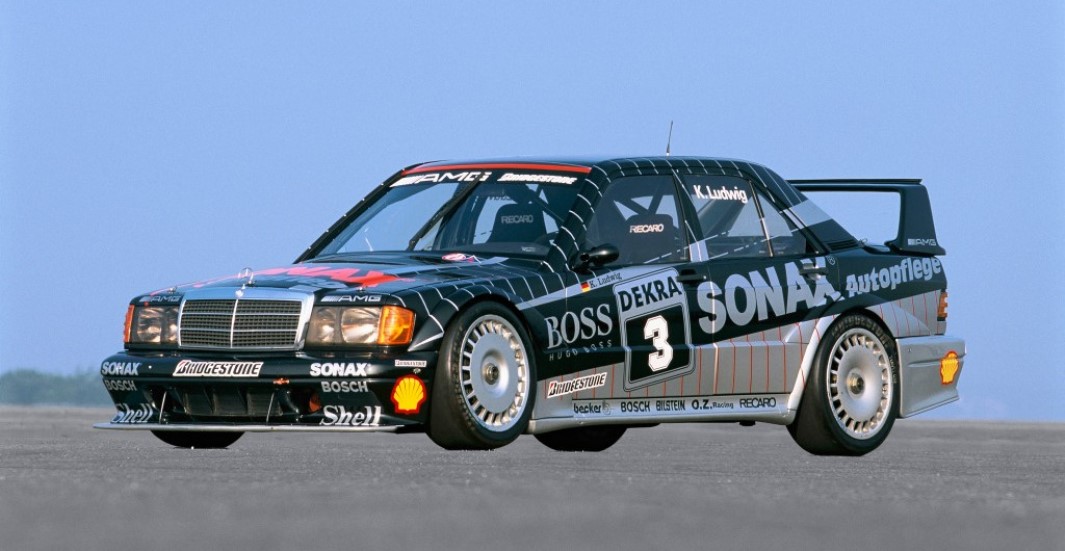 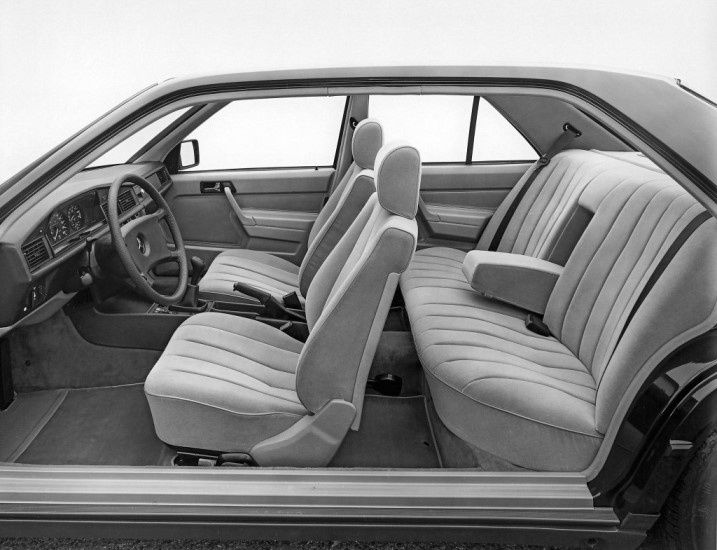 40 years ago, the Mercedes-Benz 190 “Baby-Benz” starts its success story

Chic, safe and sporty – with these demands in mind, Mercedes-Benz expands its model range on 8 December 1982 to include a new, more compact model series below the upper mid-size class and the full-size class. The Mercedes-Benz 190 and 190 E models of the 201 model series sets new standards in this market segment.

Today, even after decades, the design of the compact sedan looks modern, and the technology is by no means antiquated. And the brand’s entry-level model, affectionately dubbed “Baby-Benz” in the vernacular, is still part of the streetscape as a popular, comfortable, and reliable classic.

After starting with the two petrol engine types, the engine range is continuously expanded. As early as 1983, a diesel variant appears, the 190 D. The sporty “sixteen-valve” 190 E 2.3-16 and its successors were successful in sales and motorsport from 1984 onwards. Especially in the German Touring Car Championship (DTM) they win races and titles.

The 190 and 190 E models feature the four-cylinder M 102 engine with a displacement of 1,997 cc. The engine has been in use in a modified form in the Mercedes-Benz 200 of the 123 model series since 1980. In order to clearly position the compact class, the brand chooses the smaller number 190 for the new models. When Mercedes-Benz presents the successor model series 202 in May 1993, it is given a name corresponding to the new nomenclature – now it is the C-Class. Mercedes-Benz has been on the market since 2021 with the current C-Class of the 206 model series.

Expansion of the model range by an attractive compact class

For decades, Mercedes-Benz passenger cars have belonged to the luxury and upper-middle classes. This changes at the end of 1982 with the 190 and 190 E models. This portfolio expansion of the brand is by no means a matter of course at the time.

A more compact model series has been discussed since 1974, when Professor Hans Scherenberg, Board Member for Development, lays the cornerstones for a Mercedes-Benz passenger car below the mid-size class in the wake of the oil crisis: “This must be a typical Mercedes-Benz. So we can’t compromise too much in terms of driving culture, safety and the corresponding Mercedes-Benz characteristics.”

The success of Mercedes-Benz implementing these demands becomes clear when presented to the dealerships and its contractual partners on 8 December 1982: The compact and easy-to-handle saloon conveys driving pleasure, the seating position of the driver and front passenger is just as good as in the larger Mercedes-Benz vehicles, and road holding, driving comfort, quality, reliability and durability does not decline.

The realization of the project is decided on 19 October 1978. At that time, the company’s board of directors determines that the 190 would be smaller, lighter and more economical than the popular mid-range 123 series.

The most modern vehicle production in the world

The W 201 has gone into series production in Sindelfingen before production also begins at the Mercedes-Benz plant in Bremen, which emerges from the Borgward plant in 1978. At the site, the Nordwerk Im Holter Feld is built especially for the 201 model series, which is considered the most modern vehicle production facility in the world at the time.

For the first time in the industry, for example, the axles are installed automatically. The former Daimler-Benz AG invests around DM 1.4 billion in the new plant – the largest single investment in the company’s history to that date. Production begins in September 1982 in Hall 7 with body-in-white components, which are previously delivered to the Sindelfingen assembly plant.

With the commissioning of Halls 8 (painting) and 9 (assembly) in 1984, the construction of complete vehicles begins. The great success of the compact class ensures that capacities and workplaces at the Bremen plant are continuously expanded. A total of around 1 million 190s are built in the city on the Weser River until August 1993. To this day, Bremen is the worldwide lead plant for the C-Class.

An important argument for the small Mercedes-Benz is provided by the US Congress in 1975 with the further tightening of the “Clean Air Act” introduced in 1970. The amendment stipulates that, from model year 1985 on, the fleet consumption of a manufacturer may not exceed 8.3 litres per 100 kilometers. In the important export market of the USA, a compact Mercedes-Benz can make a decisive contribution to achieving this goal – among other things with sophisticated aerodynamics. In fact, at its market launch in 1982, the 201 model series has the best drag coefficient of all Mercedes-Benz saloons with cW = 0.34. The consistent lightweight construction of the new compact class is by no means to be achieved at the expense of active and passive passenger safety. On the contrary, the body of the W 201 becomes a model for other Mercedes-Benz model series in some areas. This includes the roof structure with the roof rails facing outwards. For the first time, a fork carrier structure made of high-strength sheet metal is introduced, whose extreme rigidity provides for defined deformation in crashes and also leads to a weight reduction of eight kilograms. 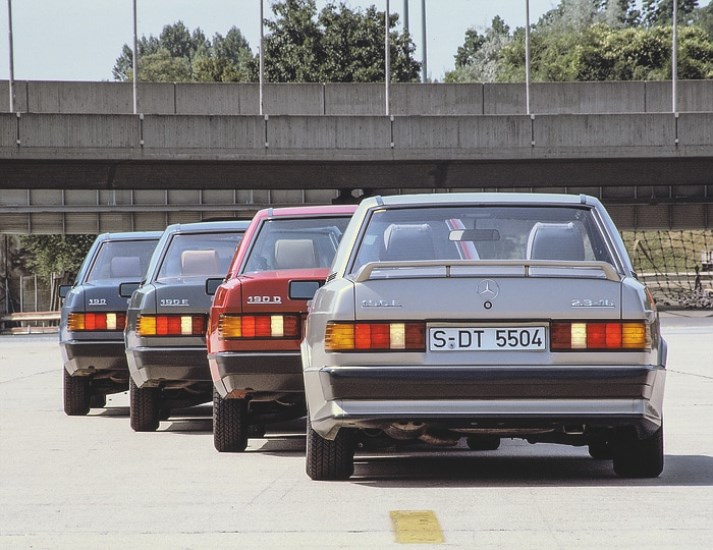 Innovative technology, timeless design and a wide range of engines

The rear axle design is particularly groundbreaking for the chassis. This multi-link rear axle bears its name because five tie-rods arranged in a precisely defined position to each other in space guide each rear wheel individually. Track, camber, track width change, start-up and brake anti-dive support can be determined independently of each other.

This optimally controlled wheel guidance largely compensates for lateral and longitudinal forces in all driving conditions. This avoids unwanted steering movements of the wheel and ensures very balanced handling. At the front, a damping strut front axle operates with brake anti-dive support is guided by individual triangular wishbones. It guarantees good straight-line stability and creates space under the bonnet with a low overall height.

The clear design of the 201 series is created under the leadership of chief designer Bruno Sacco and is significantly influenced by Peter Pfeiffer. Pfeiffer’s maxim: “Even a Baby-Benz has to look like a Mercedes-Benz, but not like a scaled-down S-Class.”

Looking back, the designer explains: “Even after 40 years, this Mercedes-Benz does not look like a classic car. The vehicle, with its design, is still wonderfully on the road today.” Classic car lovers see it the same way: Prices for well-maintained vehicles in the series have been rising for years.

The first compact class offers engines for almost all requirements: The carburettor variant of the first 190 in 1982 produces 66 kW (90 hp), and the 190 E is equipped with petrol injection 90 kW (122 hp). After that, the engine range is continuously expanded. In 1983, the 190 D (53 kW/72 hp) appeare, the “whisper diesel” with sound-absorbing engine encapsulation.

The 190 E 2.3-16 sets three long-distance driving world records on the Nardò test track in southern Italy in 1983. In 1985 it is approved for motorsport (homologated) and first used in the French Touring Car Championship. In the 1986 German Touring Car Championship (DTM), Volker Weidler is runner-up in the drivers’ standings with a 190 E 2.3-16 technically supported by AMG.

In 1988, Mercedes-Benz decides to return to motorsport, and from 1991, the new Head of Mercedes-Benz Motorsport, Norbert Haug, bundles the racing development of the 190 E 2.5-16 EVO II at AMG.

After victories in previous years, the EVO II takes the top three places in the DTM in 1992 with Klaus Ludwig, Kurt Thiim and Bernd Schneider, while Mercedes-Benz defends its victory in the manufacturers’ classification. In 1993, Roland Asch is runner-up for the second time with the 190 E “Class 1”.