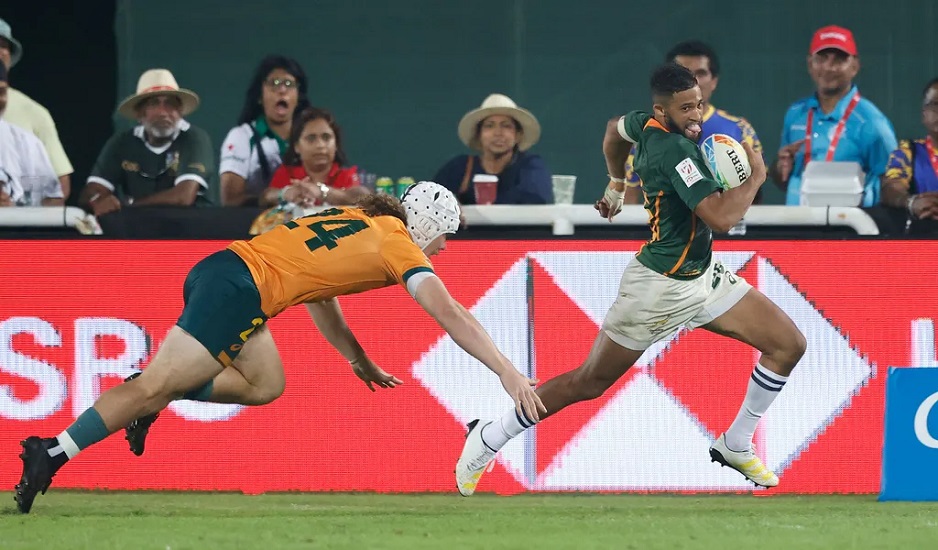 The action continues on Saturday at 09:00 local time (GMT+4) with women’s quarter-finals and concludes with the women’s and men’s finals at 18:56 and 19:26 respectively

There were upsets, draws and high drama on the first day of the Emirates Dubai 7s played in front of a vibrant festival atmosphere at The Sevens Stadium.

With qualification for the Olympic Games Paris 2024 resting on this season’s standings, the HSBC World Rugby Sevens Series 2023 has taken on an extra edge, which was immediately apparent on a fiercely competitive opening day.

In the men’s competition with Fiji, New Zealand and Argentina all grouped together, Pool B was set for some epic encounters and so it proved with the race for the quarter-final spots going right down to the wire. All three teams finished on seven points apiece having each achieved two wins and a loss, but it was Fiji who missed out on points difference. Pool A was hardly any less competitive with South Africa and Australia going through at Great Britain’s expense after a titanic tussle.

The women’s competition was a little more clear cut in terms of outcome but no less compelling as Australia were joined by New Zealand and Ireland in reeling off three consecutive wins.

For the 16 best men’s teams, this was their second hit-out of the season, having kicked off in Hong Kong a month ago, while for the best 12 women’s teams Dubai signalled the start of their Olympic qualification campaign. The top four teams in each competition at the end of the World Series will be guaranteed a spot in the Paris 2024 line-up.

The winner of the opening event of the season has gone on to be crowned women’s World Series champions in seven of the past nine seasons so, historically if nothing else, it was important for the title contenders to put out a statement of intent and that’s exactly what Tim Walsh’s all-conquering Australia team did and they will now go on to meet Fiji in the fourth and final women’s quarter-final. In Saturday’s other quarter-final ties, New Zealand will take on Great Britain, Ireland face the USA and France and Spain are set to collide for a place in the semis.

In the men’s event, two of the first eight matches were draws, with Ireland and Spain sharing the spoils in the first match of the tournament before Kenya did brilliantly to tie with current World Series champions, Australia, who claimed the first gold medal on offer this season in Hong Kong a month ago. Four of the other matches were settled by single-digit winning margins with a first win in Dubai for Argentina over New Zealand and Great Britain’s victory over South Africa being two of the standout results.

By the end of a day of twists and turns and some sensational action, all of the men’s big guns remain in contention for medals except for Fiji. Argentina play Ireland in the first of the quarter-finals on day two before USA take on Australia. France are up against New Zealand and South Africa play Samoa in the other ties.

Ireland women’s captain Lucy Mulhall said: “It was a good day and I think after the World Cup we had a point to prove. It wasn’t always pretty today but we grew game to game and we were able to find a few fixes as went.

“The fact we’re growing each game and learning each time we go out on the pitch, I’m very proud of the team and am excited to get better tomorrow.”