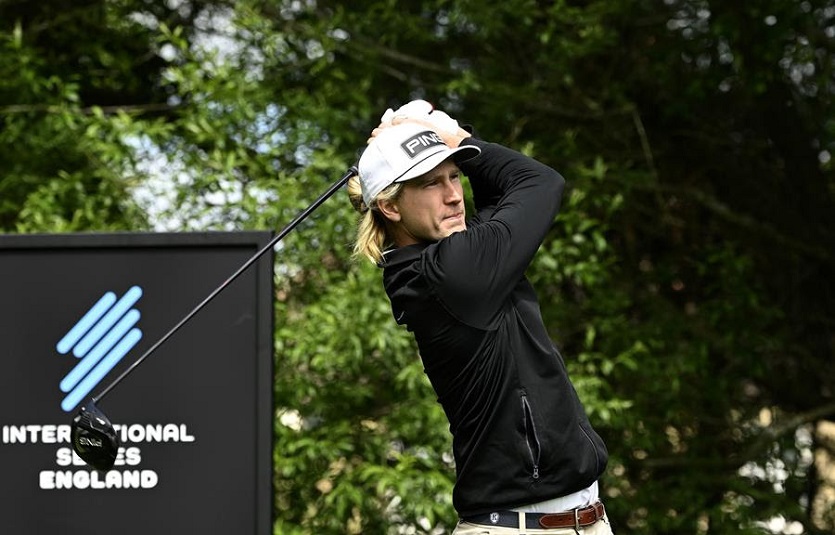 Travis Smyth is confident he can register a maiden Asian Tour success after taking the third-round lead in the International Series England after signing for a superb five-under-par 66 today.

The Australian, 27, topped the leaderboard on eight under par at Slaley Hall Hotel, Spa & Golf Resort, near Newcastle – in an event that marks the Asian Tour’s debut in the UK.

He leads by a shot from Thailand’s Sadom Kaewkanjana, who matched the course record with a 65, Zimbabwe’s Scott Vincent, in with a 69, and Korean Joohyung Kim, who carded a 70.

South African Justin Harding, joint overnight leader with Kim, carded a 71 and is two off the lead.

Smyth is set to feature in the final group for the first time on the Asian Tour but shrugged off the pressure and said: “I definitely think I can win. I don’t know how I’m going to do it – but it’s going to be exciting. This is the best chance that I’ve had on the Asian Tour to win, so I cannot wait to get out there.

“Today, I knew I was up there early on because I started pretty well. I’m hoping tomorrow I feel like I did today.”

The crunch moment for Smyth came at the par-three 17th where an errant six iron left him in all sorts of trouble on the edge of penalty area, right of the green.

He said: “It was a terrible shot. I got way ahead of it, left the face open and it went way right. I was inside the hazard line – a foot away from the little ditch, so very lucky.”

He was still partially blocked out but knocked a chip to the front of the green before draining a 33 footer. The great escape was proof indeed that it was his day.

The man from 100 kilometres south of Sydney in New South Wales, said: “I was thinking ‘make four’. It was pretty obvious to go left of the tree, hit it to the front of the green, two-putt – and I holed it!”

Sadom produced one of the finest rounds of his fledgling career to put himself in position to win his third Asian Tour title; in January he claimed the SMBC Singapore Open.

“I’m very happy today. I had a good start from hole number three with a birdie, and a par save on the fourth that changed the momentum for my game today,” said Sadom.

“This is the first time for me in the UK and I like this weather, but maybe it’s a bit cold. The golf course condition is very good, I like this course so much.”

He was bogey free today and impressively worked his way up the leaderboard with birdies on three, eight, 11, 12, and 15 and 16.

Vincent, fresh from his third victory in Japan last weekend, will also go in search of a first Asian Tour title tomorrow.

It was a day for patience and the Zimbabwean showed plenty as he followed 10 straight pars with a trio of birdies from the 11th.

But late in the afternoon a couple of short putts refused to drop – including one at the last where he made his only bogey.

Vincent said: “Obviously that would’ve been nice to have finished a little better, but I hung in there.

“I didn’t feel like I had my best today. So I’m hoping that I’m going to wake up tomorrow and feel amazing and give it a good go.”

Harding also displayed great composure to recover from a damaging front nine in which he dropped three shots.

But he clawed them all back on the home loop to finish alongside his compatriots Neil Schietekat and Ian Snyman.

Harding said: “It was just a weird day but I’m still there – it’s fine. I’m glad I made a couple of birdies on the back nine and it keeps me in the mix.”

Graeme McDowell still thinks he can play a part in the finish after mounting a third-round comeback.

The Northern Irish star was three over for his day after 10 holes but dug deep to birdie four of the next five holes. His 70 left him at four under and just about in touch with the leaders.

McDowell said: “I’m really happy with the fightback. Tomorrow, I might need five or sixunder to have a chance to win, but I’m excited to be in the mix.

Thailand’s Ratchanon “TK” Chantananuwat, the 15-year-old amateur star, came in with a 72 and is even par for the tournament. He went out in three over but recovered with a fine two under par homeward half.

The inaugural US$25 million LIV Golf Invitational Series tournament will be played at Centurion Club from June 9-11.