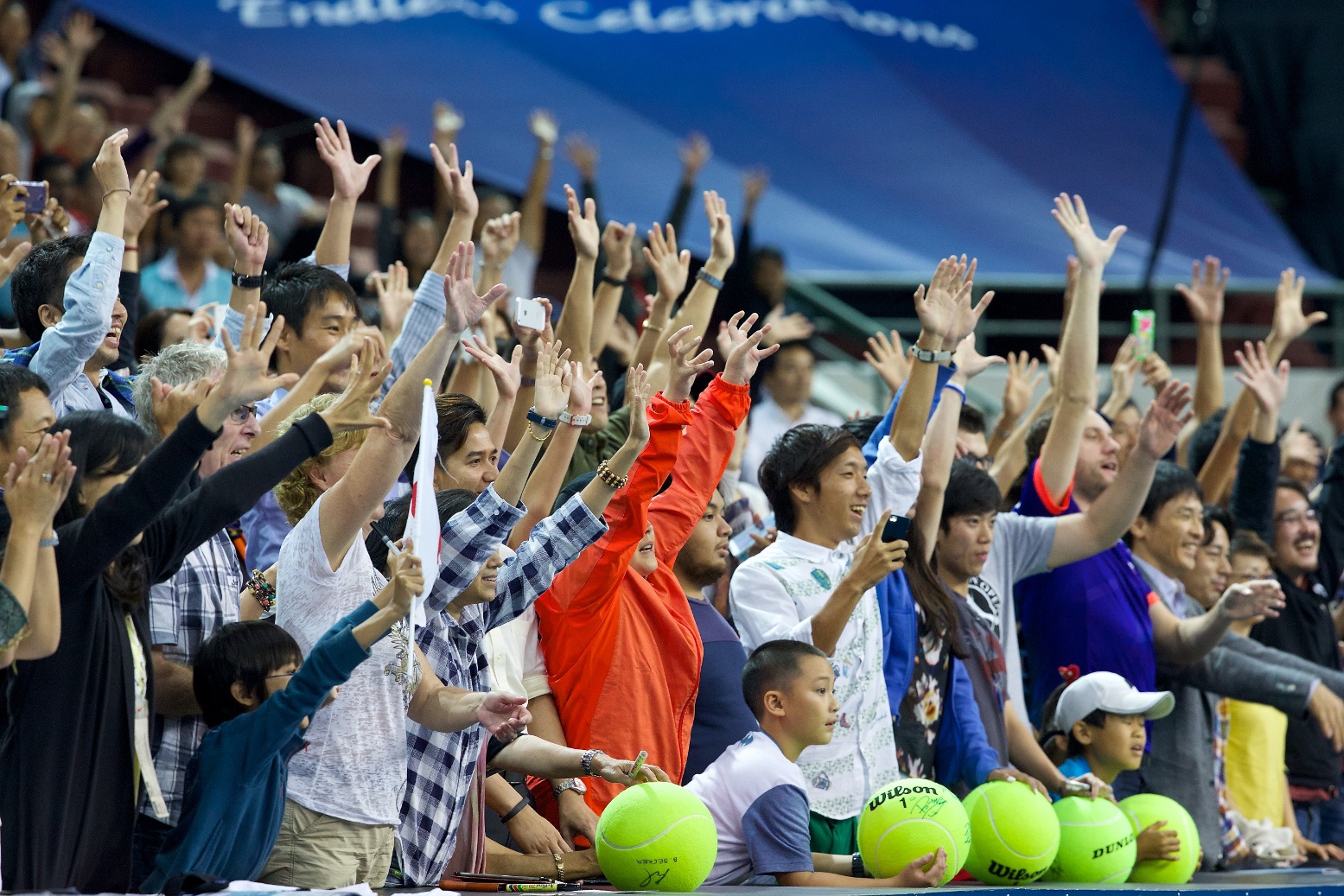 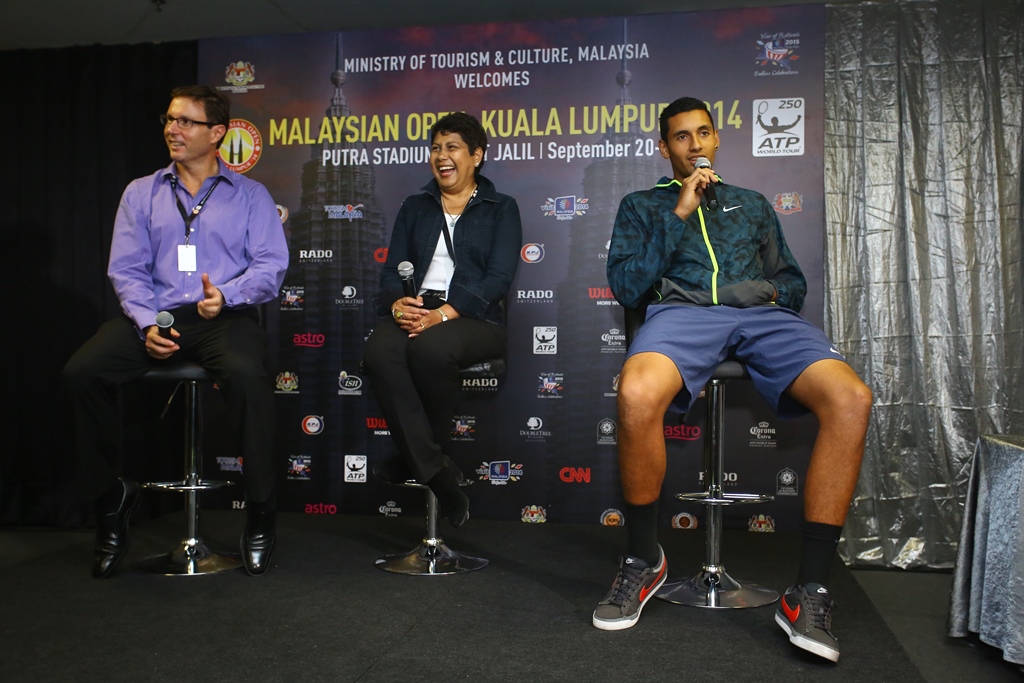 Singles top seed Kei Nishikori of Japan took just over an hour in front of a Wednesday crowd of over 4,000 fans to defeat American Rajeev Ram 6-2, 6-3 and move into the quarterfinals of the Malaysian Open, Kuala Lumpur 2014 played here at the Putra Stadium in Bukit Jalil.

The 24-year-old Nishikori, high on confidence after a fine season in which he won the ATP 500 Barcelona Open and ATP 250 U.S. National Indoor Tennis Championships while also reaching the finals of the US Open last month, continued his fine run of form to book a quarterfinal with Australian Marinko Matosevic.

“Physically, I am almost perfect I think. It was a good first match for me, everything worked well. I had a really tough five-setter in Australia this year with (Matosevic). He’s a good player, always a dangerous player. I’ll try to have a good practice tomorrow and be ready for the next one,” said the top Japanese. That match will be played on Friday at 8.30PM and will be televised to millions of homes around the world – including a prime time broadcast in Japan.

The fourth seed and Malaysian Open finalist for the last two years, Julien Benneteau of France, also moved into the quarterfinal with a 6-4, 6-3 win over Serbian wild card Filip Krajinovic and will face fifth seed Pablo Cuevas on Friday.
Cuevas had earlier scraped through to the quarterfinals after a hard fought 3-6, 7-5, 7-5 comeback victory over Ivan Dodig in 2 hours and 45 minutes – the tournament’s longest match so far.

In an up and down encounter, the Uruguayan world No.38 Cuevas saved three match points at 3-5 down in the final set before taking three games on the trot to complete the remarkable turnaround.

Sixth seeded Portuguese Joao Sousa, who made the finals in Metz last Sunday and only arrived in Kuala Lumpur yesterday, could not overcome jetlag and a persistent Benjamin Becker of Germany. The 33-year-old world No. 66, who beat Sousa on grass in June’s Topshelf Open, upset the tournament’s defending champion once again on hard court, winning 7-6 (7-1), 6-2 in 76 minutes.

“I knew he was a little bit tired maybe from the travelling, but he was full of confidence and started off well. I was confident that the longer the match goes, the better my chances will be. I think in the end I played a good match,” said Becker.

The 29-year-old will meet Nishikori on Friday as he attempts to make his first ATP tour semifinals appearance.

“I felt a bit sluggish (after playing last night) and it took me a while to get going, but once I got going I improved a little bit. I did just enough to win. I’ve lost to Nishikori twice, five sets at the Australian Open and straight sets in Miami. I’ve never lost to Rajeev, so… I’m hoping for Rajeev,” said the Aussie No.4.

Meanwhile, Michal Przysiezny of Poland scored an upset 4-6, 6-4, 6-2 victory over Arab No.1 Malek Jaziri of Tunisia in one hour and 46 minutes.

The 30-year-old world No.148 Pole will be gunning to make his third career appearance in the quarterfinals of a Tour level tournament when he meets seventh seed Pablo Andujar tomorrow.

In the doubles, German-Austrian duo Andre Begemann and Julian Knowle eliminated Australian Open finalists and top seeded defending champions Eric Butorac and Raven Klaasen in the first round with a 6-1, 3-6, 10-6 super tiebreaker victory.
Begemann and Knowle have won two titles each this year and have a combined 22 titles.

They won as a pair on the grass courts of the Gerry Weber Open this June, while Begemann also emerged champion at Gstaad a month later (w/ Robin Haase). In January, Knowle had picked up his 17th career title at the Heineken Open (w/ Marcelo Melo).

The doubles third seeds, Brit Dominic Inglot and Romanian Florin Mergea, started off strong in the Malaysian Open with a straightforward 6-4, 6-4 victory over German pair Frank Moser and Alexander Satschko.

The American-Russian pair made the finals of the Australian Open grand slam in January and picked up their first title of the year the following month at the U.S. National Indoor Tennis Championships in Memphis.

In a tie that local fans have been looking forward to all week, 19-year-old Australian Nick Kyrgios (the only teenager in the ATP tour top 100) will partner up with top local teenager Syed Mohd Agil Syed Naguib as the duo take on the second seeded doubles pairing of Brit Jamie Murray (Andy Murray’s brother) and Aussie John Peers in tomorrow’s night featured match on Centre Court starting not before 7.45pm.

The scratch Aussie-Malaysian wild card pairing will have an uphill task against their in-form Brit-Aussie opponents who won at Munich and reached the finals at Winston-Salem and Queen’s this year, but should certainly enjoy the backing of local spectators.

The remaining four second round singles matches at the Malaysian Open, Kuala Lumpur will be played on Centre Court tomorrow.

Both the seeds are enjoying the best season in the careers, with 26-year-old Gulbis ranked at No.13 and 27-year-old Mayer at No.25, and will be making their first appearance here at the Malaysian Open.

In the only other first round doubles match to be played, seeded singles players Leonardo Mayer and Paolo Sousa team up to play Italian-Austrian pairing of Daniele Bracciali and Oliver Marach.

Off the court, a special ‘town hall meeting’ style event was held at Putra Stadium in the evening, featuring Nick Kyrgios and his mother “Nill”.

Members of the public were given a rare opportunity to get up close and personal with the 19-year-old rising tennis star, who shot to fame after beating Nadal in the fourth round at this year’s Wimbledon.

Amongst other candid revelations, Kyrgios confessed that his favourite colour was pink, the best thing he loved about Malaysia was the food and that the Australian tennis player who has inspired him the most is Lleyton Hewitt.

Fans have more opportunities to meet their favourite players at the tournament, with special autograph sessions being held at the stadium every day.