Home 2022 Tripletta: Post-Rossi era starts with a bang for the Azzurri 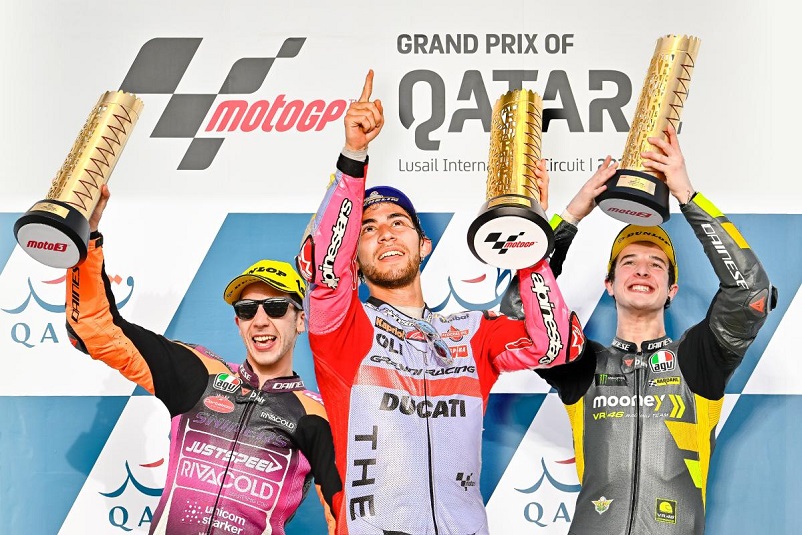 Some things are just written in the stars. Back at the 1996 Malaysian Grand Prix, the motorcycling world was welcoming a charismatic young Italian named Valentino Rossi into the Grand Prix fold whilst also witnessing an Italian hat-trick on the opening weekend for only the third time in history.

Victories came courtesy of Luca Cadalora in the 500cc class, Max Biaggi in 250cc and Stefano Perugini in 125cc on a special afternoon at the Shah Alam circuit.

Fast forward 26 years and MotoGP™ was embarking on its first race without Rossi at the 2022 Qatar Grand Prix, but The Doctor’s presence was definitely felt. Il Canto degli Italiani echoed around the Lusail International Circuit on three separate occasions to mark Italy’s fourth clean sweep on the opening day of a season in Grand Prix history.

Enea Bastianini (Gresini Racing MotoGP™) and Celestino Vietti (Mooney VR46 Racing Team) tasted success in MotoGP™ and Moto2™ for the first time in their careers, while Andrea Migno (Rivacold Snipers Team) made his own bit of history in Moto3™.

It was a night to savour for the Azzurri as you have to go back three and half years for the last time Italy took a clean sweep at any Grand Prix. Misano 2018 was a weekend nobody will forget as Andrea Dovizioso, Pecco Bagnaia and Lorenzo Dalla Porta all stood on the top step of the podium on home soil. Both Bagnaia and Dalla Porta would go on to win World Championships and now the next crop of Italian hopefuls have officially arrived on the scene.

Bastianini’s debut victory meant he became the first rider in 15 years to clinch a career-first premier class win at Round 1, matching his idol Casey Stoner who did it with the factory squad back in 2007. He also becomes only the third Italian in premier class history to win in Qatar after Valentino Rossi and Andrea Dovizioso.

In the intermediate class, VR46 Academy’s Celestino Vietti made his boss proud by becoming only the third rider in Moto2™ history to take pole position, the fastest lap and lead every lap on course to their debut win after Tito Rabat in 2013 and Andrea Iannone in 2010. He’s also the sixth rider in Moto2™ rider to break their duck under the Qatar lights following the late Shoya Tomizawa, Jonas Folger, Franco Morbidelli, Pecco Bagnaia and Tetsuta Nagashima.

Meanwhile, in Moto3™, there was yet more joy for the VR46 Academy boys after Andrea Migno clinched his second lightweight class win. The four years, nine months and two days between his debut win at Mugello in 2017 and his Doha delight is the longest wait between a first and second Moto3™ victory in history. He also made sure it was the first time two VR46 Academy riders were victorious since Vietti and Marco Bezzecchi’s successes at the 2020 Styrian Grand Prix.

So, a night to remember for Italy for various reasons. The post-Valentino Rossi era officially began but the night wasn’t tinged with any sadness. The famous 46 might have stepped to one side but MotoGP™ is in excellent hands throughout his native Italy in his absence. A tripletta dell’Italia to start 26 years of Rossi magic and now another tripletta dell’Italia to kickstart the next era of Italian magic. –www.motogp.com