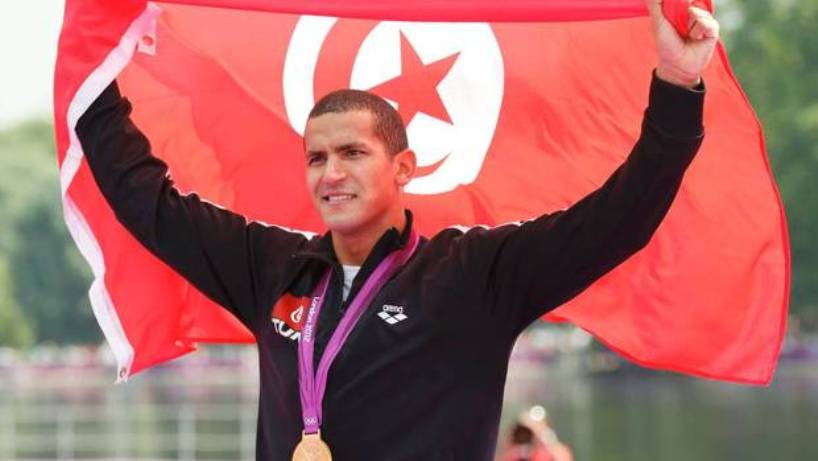 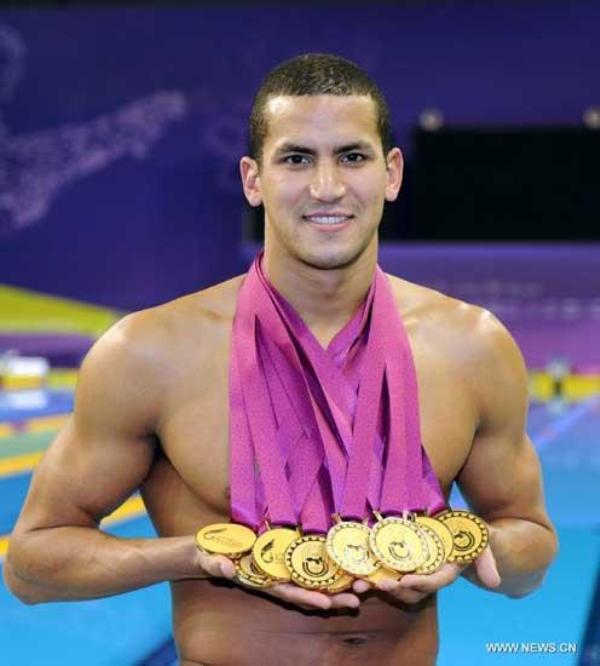 Tunisia’s most decorated sportsman Oussama Mellouli will go the Olympics for the fifth time in Rio de Janeiro at the end of a roller coaster swimming career of gold medals and a drug ban.

A two-time gold medalist and the first African man to win an Olympic swimming gold, Mellouli, 32, said he is “calm” and “optimistic” that he can win one last medal.

“With the Olympics, I’m going to something I know well. For the young ones, it will be different,” he said.

“Eat, swim, sleep, repeat — that’s the rhythm of an athlete. You shouldn’t think of anything but that.”

He made African history just three months after returning from an 18-month ban after testing positive for a stimulant in late 2006. Mellouli said it was a substance to help stay awake while studying. He lost two world titles because of the ban.

Four years later at the London Olympics, he snatched a bronze in 1,500m

And despite a virus that left him vomiting in his hotel room just days before the 10-kilometre swimming marathon, he headed to the Serpentine lake in Hyde Park determined to compete.

Under blazing sun, he beat Germany’s Thomas Lurz to gold in a time of 1hr 49min 55.1sec.

“Ninety-nine percent of athletes are dreamers,” he said. “From the moment the dream is in our spirit, we strive for it. For me, it’s been like that since I was 16,” said Mellouli, who comes from La Marsa on the coast near Tunis.

Mellouli had to think seriously, including in a six month retreat, before launching into this Olympic campaign.

He said he wants to accomplish his Olympic dream for his family, particularly his mother Khadija, and the people who have accompanied him throughout his career.

“In Tunis, Marseille, Font-Romeu, in the United States — I’ve had the chance to work with exceptional people who have pushed me to win these prizes,” he said.

Despite his previous victories, he has not yet decided whether to compete in the pool or just focus on the marathon — just the third in the history of the Games.

“The 1,500 metres is three days before the 10 kilometres. Competing could affect my freshness,” he said.

Mellouli has mostly trained in California for the last 15 years, but keeps strong ties to Tunisia.

Dictator Zine El Abidine Ben Ali made much of Mellouli’s success, and the swimmer was accused of being close to the regime.

It was a perception Mellouli was keen to shake off when the regime fell in 2011.

Sitting in a hotel on Bourguiba Square where many of Tunisia’s early Arab Spring demonstrations took place, he told AFP he saw his victory in London 2012 as his “redemption”.

“I was the only really popular athlete under Ben Ali, and I talk about it openly. Winning another gold medal in 2012, for the Tunisian revolution, was a very important moment in my career,” he said.

From the United States, Mellouli follows closely the tortuous progress of Tunisia’s young democracy, which has been threatened by a series of jihadist attacks.

“Before, it was our family that used to worry about us when we were away. Now, it’s we who are worried for them,” he said.

But he added: “Even if there are sacrifices to make, and difficult choices, we’re proud of this democracy.”

As at the Beijing in 2008, Mellouli will carry the Tunisian flag at the opening ceremony. And when the Games are over, he has ideas for Tunisian sport.

He wants to instill in youth the idea that “if you dream big and you work hard, you can get there.”

“Some people say that that’s an American or a French slogan, it’s not for us in Tunisia, he said.

“But for me, I think Tunisians can do extraordinary things.” – Agence France-Presse