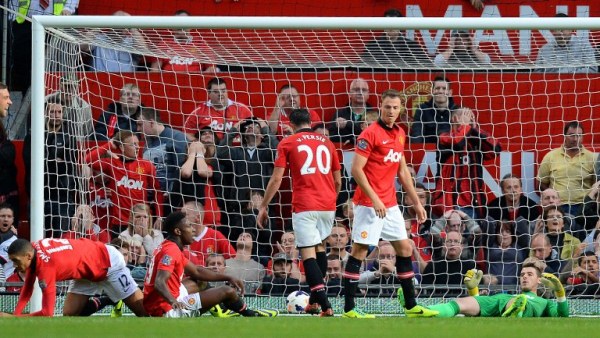 Manchester United will look to end a three match winless streak when they take on Crystal Palace on Saturday/ AFPpic.

MANCHESTER UNITED will look to end a three-match winless run and get their spluttering top-four challenge back on track when they travel to Crystal Palace on Saturday.

United made the most of a blank weekend caused by their early exit from the FA Cup by heading to Dubai for warm weather training after last week’s goalless draw at Arsenal.

But even there United manager David Moyes couldn’t relax as he continues to reshape a squad which is in need of a major overhaul following a dispiriting start to the post-Alex Ferguson era at Old Trafford.

United are closing on a new contract for Wayne Rooney, while Inter Milan claim they are on the verge of a deal for Nemanja Vidic, who announced earlier this month that he will leave Old Trafford when his contract expires in the close-season.

Moyes has insisted Vidic, 32, will remain in his side for the remainder of the season and United now enter a key period of the season.

After the visit to Selhurst Park to face Palace, they re-start their Champions League campaign with a last 16 first leg tie at Olympiakos next week and with an 11-point gap to fourth-placed Liverpool, they may have to win the competition to get a place for next season.

With 12 league matches remaining they know they can not afford any more slips like the 2-1 loss at Stoke, which again halted the champions’ progress, at the start of the month.

Following that they were held to a 2-2 draw at home against Fulham before drawing at Arsenal.

Moyes will be hoping that the time away will have aided Juan Mata’s integration into the team and the Spaniard is once again likely to start alongside Robin van Persie and Rooney.

Midfielder Marouane Fellaini was on the bench at the Emirates after two months out with a wrist injury, but winger Nani is expected to miss out once again with a hamstring problem.

Palace have endured an unexpected two week break since their last outing, the 3-1 home victory over fellow strugglers West Bromwich Albion that has left them two points clear of the bottom three.

Tony Pulis’s side had been due to face Everton at Goodison Park last week but the match was postponed because of adverse weather conditions.

Palace manager Pulis was grateful for the efforts of the Merseyside club in finding overnight accommodation and training facilities for his team.

But he insists the enforced lay-off came at the wrong time for his improving team who appeared destined to fall back into the Championship earlier in the season.

“It’s disappointing because we were on such a good run so to have so long not doing something is tough,” Pulis said.

“I have to say though, Everton were absolutely fantastic. They fed the players, found us a hotel and training facilities and paid for everything.

“I just hope the chairman has paid back what we owe them!”

Palace have had plenty of time to prepare for the visit of United and Pulis has dismissed any suggestion that Moyes’ men are a weakened force this season.

“Although David Moyes has had a tough start they have some outstanding players and they could have won their last three games comfortably,” he said.

“With Sir Alex Ferguson they had the breaks and won games, unfortunately with David they have not had that and have not been able to pick up momentum.

“In time David will turn it the way he wants it and you have to give him time just like Sir Alex. The people behind the scenes will give David the time.”