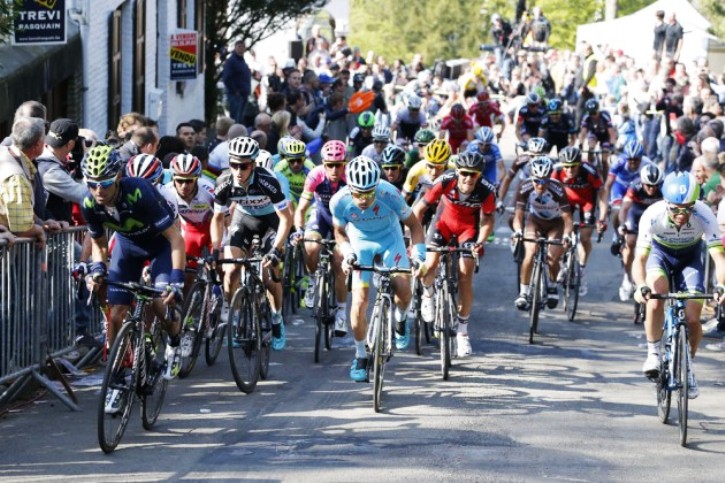 A host of young pretenders will be lining up title-holder Alejandro Valverde in their sights at the Fleche Wallonne on Wednesday.

The midweek Ardennes Classic race lasts nearly 200km yet almost always comes down to a shoot-out on the imposing 1.3km long final ascent of the Mur de Huy (wall of Huy).

It’s a climb that requires riders to manage their effort, something Spanish veteran Valverde has done to perfection three times.

He holds the record for the joint most wins at the Fleche with four other riders, including Belgian great Eddy Merckx.

But Australian Michael Matthews will be amongst a posse of young pretenders looking to strip Valverde of his crown.

Matthews, 25, finished fifth at Sunday’s Amstel Gold, the first of the three Ardennes Classics, and the Orica-GreenEdge rider has been in fine form since a great start to the season at Paris-Nice last month.

Perhaps the most complete of the young challengers is Frenchman Julian Alaphilippe, who was second to Valverde at both the Fleche Wallonne and Liege-Bastogne-Liege last year.

The 23-year-old was suffering from mononucleosis over winter but has come back into form at just the right time, finishing sixth at Amstel.

Belgian Tim Wellens, 24, who made a daring solo attack 7km from the end of the Amstel Gold race before finishing 10th, and Czech Petr Vakoc, 23, winner of the Brabantse Pijl race, could also both feature, as could 24-year-old Dane Michael Valgren, second to veteran Italian Enrico Gasparotto at Amstel.

Valverde will start as favourite, not least due to the form he showed in winning the Vuelta a Castilla y Leon last week.

However, the 35-year-old’s main target this year is the Giro d’Italia next month so he has been concentrating on stage racing rather than one-day classics.

He skipped Amstel, where he was second last year, in order to take part at the Tour of Castile and Leon.

He also won the Vuelta a Andalucia in February but despite his lack of one-day practise, he has the experience to know when and where to attack on the Huy climb.

Another veteran who should feature is Joaquim Rodriguez, who claimed victory on the Mur de Huy during last year’s Tour de France when the third stage finished there.

A reknowned puncher, Rodriguez won the Fleche Wallonne in 2012 but his inability to win more than just the one Ardennes Classic is a source of some mystery. – Agence France-Presse