Home 2022 Victory for Malaysian rider in the Underbone 150cc 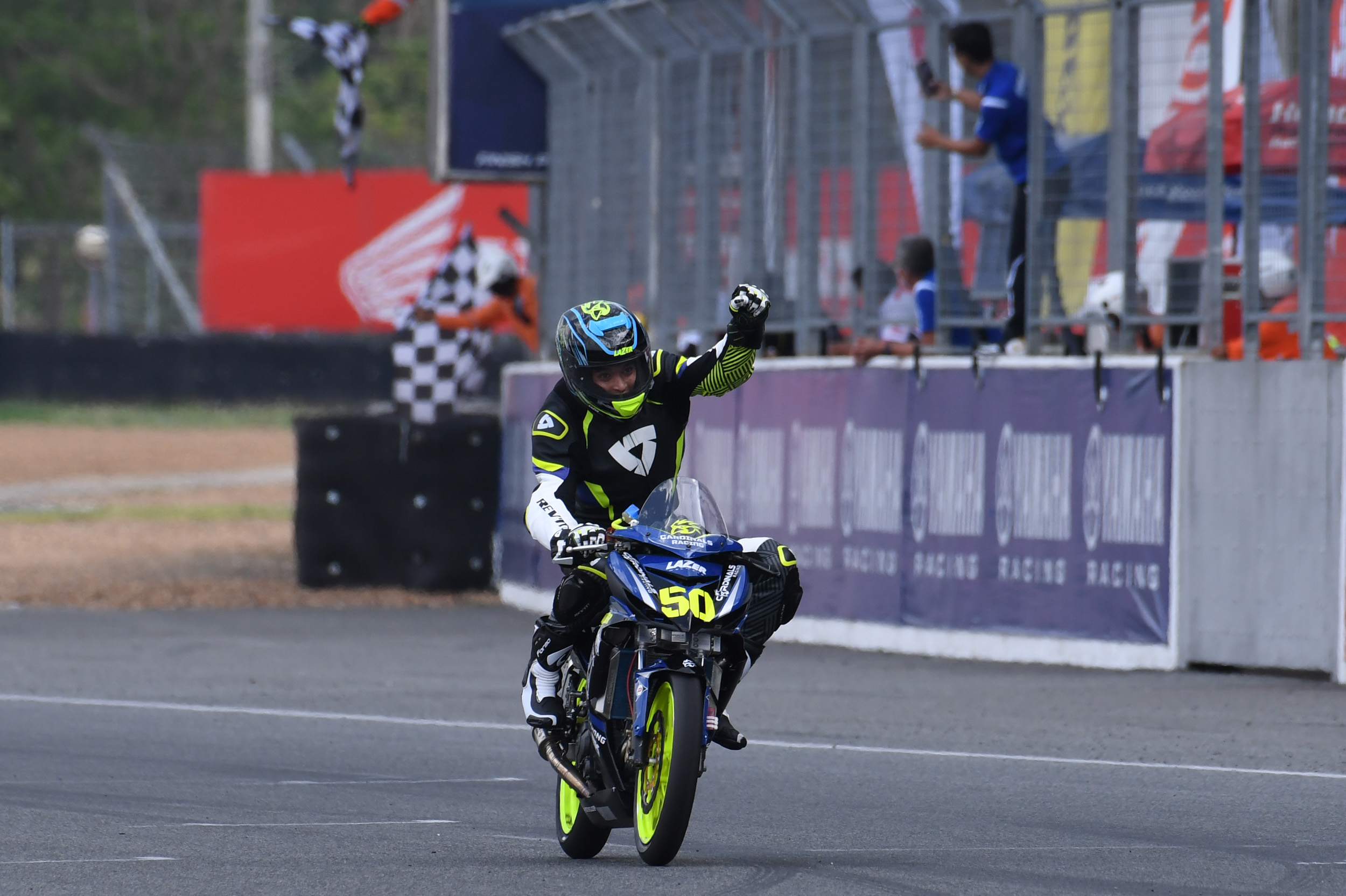 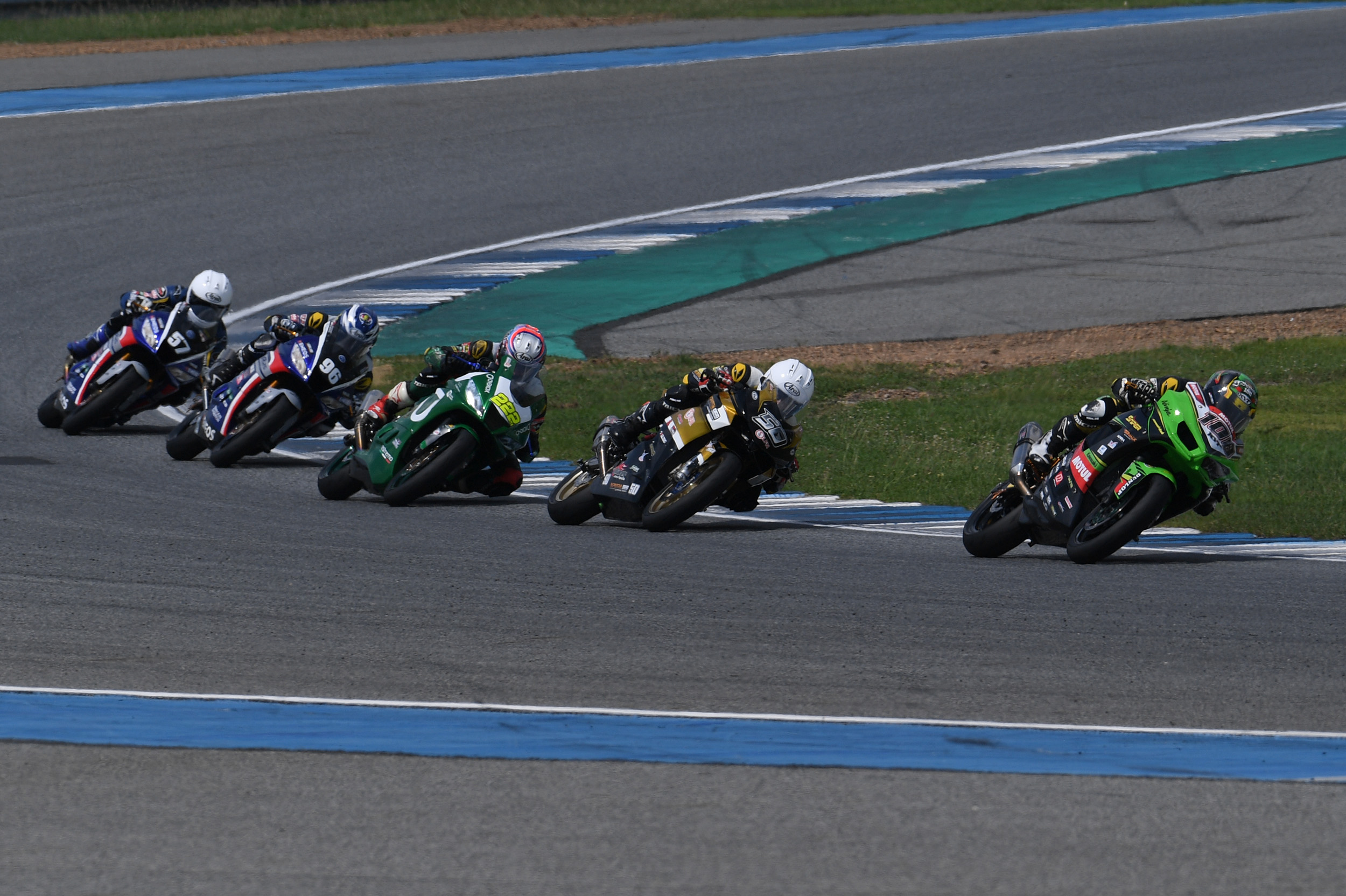 It’s a win for Malaysian rider Ahmad Afif Amran of Cardinals Racing Team at the FIM Asia Road Racing Championship when he emerged fastest in the Underbone 150cc category, Race 2.

Afif who took the fourth position on the grid picked up his pace at the third lap, re-positioning himself second among the troupe of riders. It was a battle between Afif and the rider before him but at the fourth lap, Afif managed to stride ahead and take the lead.

Afif flaunted his skills when he raced out of the traps in lap five and sped ahead leaving a trail of riders chasing after him. He maintained his pace throughout the remaining laps and finished strong at 16:34:083s, almost 3 seconds ahead of the next rider in line.

“The team has worked tirelessly throughout the weekend to fine tune the machine, to ensure we get the right timing. I am very happy with the result.”

Taking the second place was Wahyu Aji Trilaksana of ONEXOX TKKR Racing Team at 16:37:136s who came in third fastest in Race 1.

The third place was claimed by Murobbil Vithoni of LFN HP696 Indonesia Racing Team when he clocked in at 16:37:357.

TRIPLE WIN FOR THE INDONESIANS AT THE ASIA PRODUCTION 250CC

It was a better day for Andy Muhammad Fadly of Motul Sniper Manual Tech Racing Team when he emerged fastest in Race 2 of the competitive Asia Production 250cc category.

Andy, who finished third at the podium in Race 1 battled through the 10-lap race with a better performance, displaying high-level skills while manoeuvring his machine to keep up his pace.

Although Andy fell back in line in lap 8, he managed to make his way up to the second spot in lap 9, striding along the top three contenders.

It was a heated battle in the final lap of who will take the win and between Andy and Rafid Topan, Andy who rode the Kawasaki Ninja 250 made the cut when he clocked in at 19:11:491s.

“Today was a better day – the weather was good and I was able to take better charge of my machine.”

“It would not deny that the race was highly competitive. The Honda bike was indeed very powerful however I am glad that I was able to make the win today.”

Coming in at the second spot was Rafid Topan Sucipto of LFN HP696 Indonesia Racing Team who logged in at 19:11:642s.

Rheza Danica Ahrens of ASTRA HONDA Racing Team, winner of Race 1 dropped to the third place at the podium when he finished at 19:11:642s. 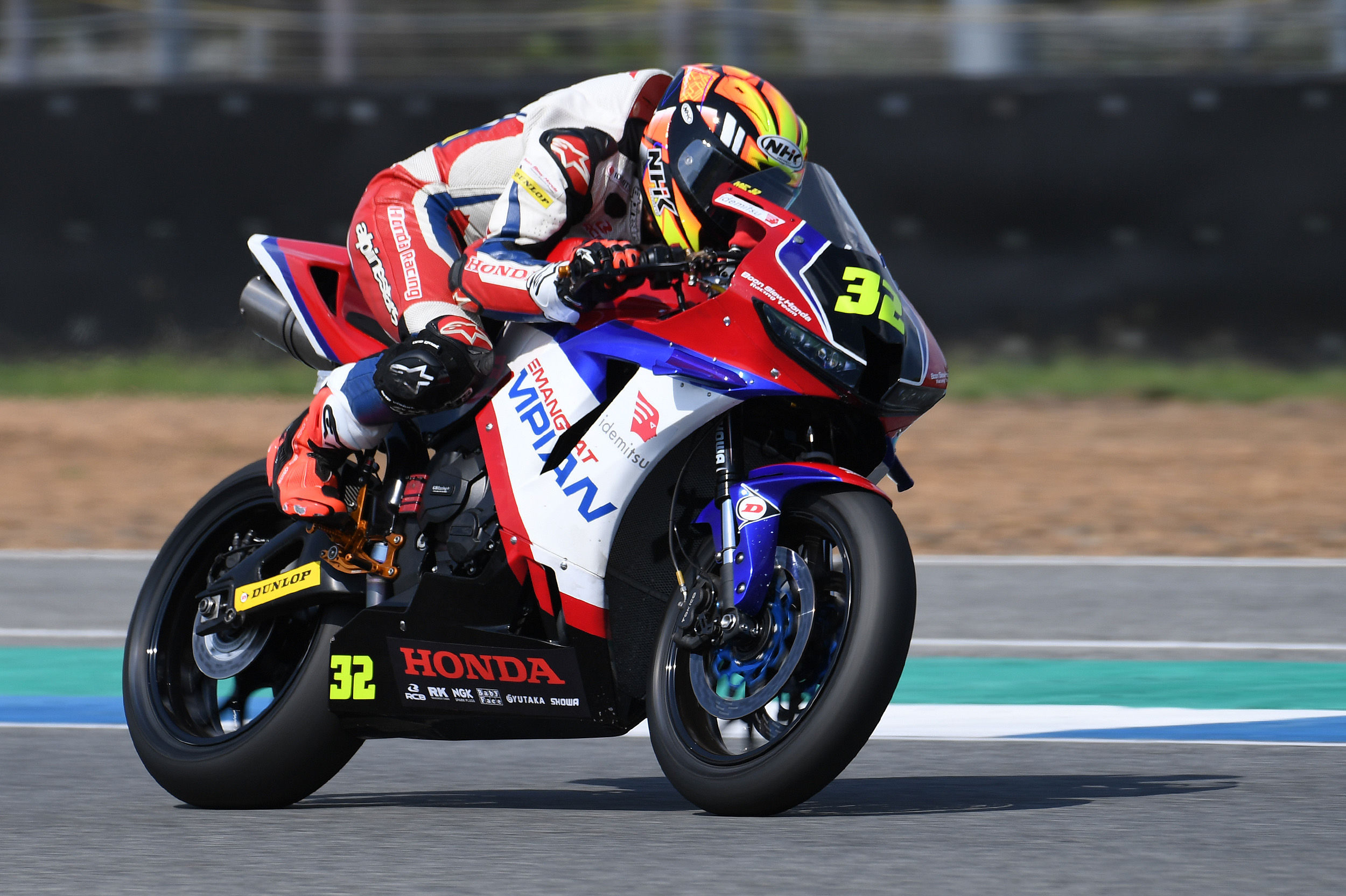 DOUBLE JOY FOR THE MALAYSIANS IN SUPERSPORTS 600CC

Mohd Helmi Azman of Boon Siew HONDA Racing Team made a triumphant win when he emerged fastest in SS600 category, ahead by a blistering 4.9 seconds.

The race flagged off to a highly competitive battle among riders of great calibre and while Helmi struggled to keep his pace up for the first five laps, Andi Farid Izdihar did not budge from the lead position.

But luck was not on Andi’s side when he took a fall consequently opening the pathway for Helmi to take on the lead in full speed. The Honda CBR600RR R rider then fastened his pace while he peeled further ahead from the trail of riders.

By the final lap, it was a confirmed win for Helmi. Clocking in at 19:59:528s the Malaysian rider fondly known as an Underbone rider claimed his first victory in the SS600 category.

“I found the race very challenging, trailing Andi and keeping my pace up. However, when the opportunity came for me to take the lead, I maintained my speed to stay ahead. I am very happy and proud to have achieved a good lap time.”

“This is my first win in the SS600 category and I am definitely looking forward to more wins this season.”

Logging in at 20:04:429s was Nakarin Atiratphuvapat of HONDA Racing Thailand, taking the second spot at the podium.

At the third place, Mohd Ibrahim Mohd Norrodin of SIC Racing who made it at 20:04:686s. 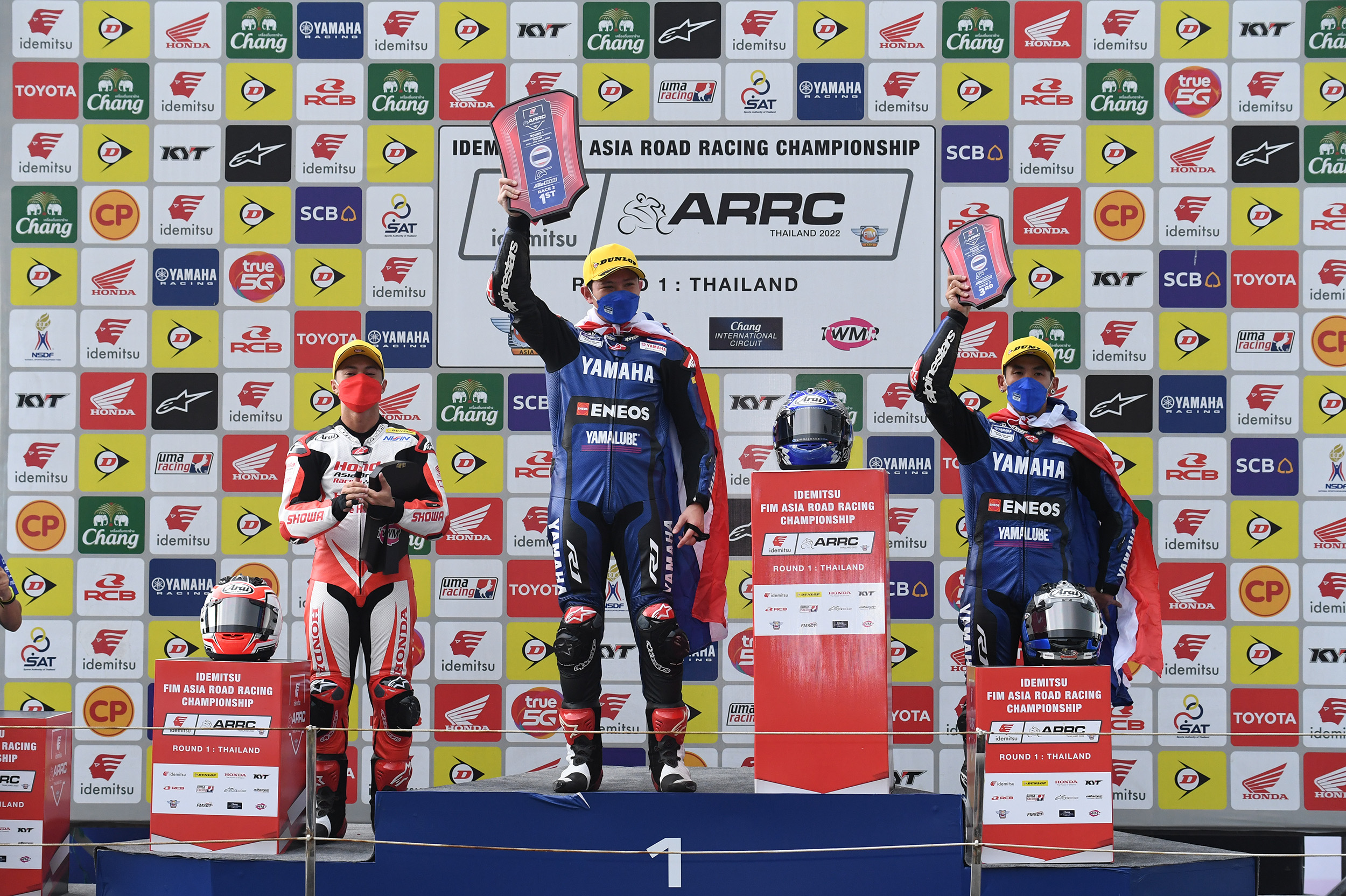 A GRAND END FOR THE THAIS IN ASIA SUPERBIKE 1000CC

The season opener of FIM Asia Road Racing Championship came to a victorious end for the Thais when Apiwath Wongthananon of YAMAHA Thailand Racing Team emerged fastest in the ASB1000 category.

The mind-blowing session witnessed the performance of highly competitive riders who ramped up their efforts in the last race of the season to grab the winning title.

Apiwath who took the second row on the grid picked up speed in the first three laps while competing with Haruki and Zaqhwan before taking the lead in lap four. The race saw a robust stride between the trio as they took turns to be at the top three position.

The final lap saw a hard fight between the three big names and at the final turn, it was a neck-to-neck between Apiwath and Zaqhwan. Towards the last seconds of the race, the vigorous Yamaha YZF-R1M rider beat Zaqhwan to the draw, clocking in at 21:02:530s.

“I made a slip in the mid of the laps however I was quick to pick it up and re-strategise. I am very pleased to have won the race because this was an extremely tough race.”
Mohd Zaqhwan Zaidi of Honda Asia-Dream Racing with Showa fell to the second spot at the podium, logging in at 21:02:704s.

Anupab Sarmoon who was trailing close behind the trio finished third at 21:04:032 presenting a double win for the YAMAHA Thailand Racing Team.