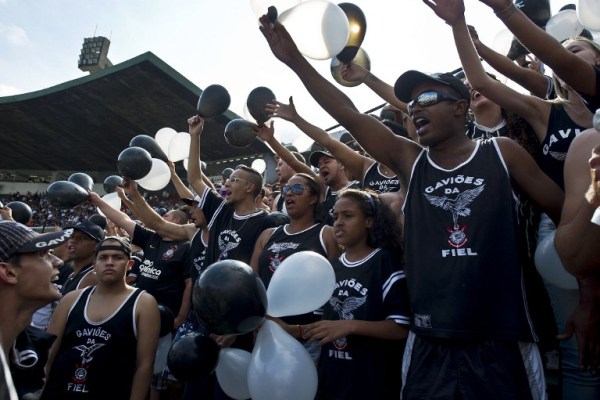 BRAZILIANS famously love football. But sometimes fanaticism goes overboard and violence results, as recent outbreaks of hooliganism and a fan attack on players attest. Last December saw one of the worst incidents of hooliganism in years when fans of Atletico Paraense clashed with visitors Vasco da Gama.

Television footage showing fans attacking each other flashed round the world, focusing on one bloodied man being mercilessly kicked in the body and head.

The December violence was all the more shocking, occurring just six months before Brazil stages the World Cup.

President Dilma Rousseff reacted sternly by insisting Brazil would not tolerate such behaviour.

But last weekend, Brazilian fans were in the news for all the wrong reasons once again after dozens of Corinthians supporters invaded the club’s training complex and attacked players.

They threatened to break the legs of at least two players and grabbed Peruvian striker Paolo Guerrero around the neck.

Former AC Milan striker Alexandre Pato, one of those targeted for poor recent form, promptly left the club on Wednesday to join Sao Paulo with Jadson going the other way.

Brazilian ‘ultras’ — hardcore fans — may not have the reputation of English hooligans of yesteryear or Argentina’s feared “barrasbravas.”

Yet football violence directly cost a reported 30 lives last year in the giant country and for hardline supporters such incidents come with the territory.

“Fighting is a consequence — of having to defend our colours,” says one Corinthians fan, Alan Mateos, 25.

Mateos is a veteran member of the club’s “Gavioes da Fiel” (hawks of the faithful) supporters’ group which numbers more than 100,000, one of Brazil’s biggest fan organizations.

Alan is easily recognisable with his bare chest and a body covered with tattoed slogans and club badges.

On the terraces they make their intimidating, high-adrenaline presence felt amid a torrent of drum beating and chanting — insults of rivals to the fore.

“Defending Corinthians is our passion. We are always there, at every match,” says Gavioes’ ‘chairman’ Wagner da Costa.

Asked if he expects to see fan violence during the World Cup he told AFP flatly: “We are ‘Corinthians’ before Brazilians.”

In seeking to rationalize hooliganism, Wagner da Costa notes there is “a problem in society.

Yet he adds football is just one facet of violence in the country as a whole.

“When we go to a disco in the suburbs there are more fights than there are in the stadium,” Da Costa asserts.

Eduardo Carlezzo, who sits on a national commission of lawyers on sporting law believes fans will put aside tribal club loyalties at the World Cup and get behind Brazil.

At the same time, Carlezzo identifies an evident correlation between football and people with a predisposition to violence.

“The groups of supporters comprise many people with a criminal record who come along to cause problems,” indicates Carlezzo.

He insists that a supporters statute passed in 2003 providing for hooligans to be fined and slapped with jail terms of up to three years is not enough.

“There needs to be better control, (more) information from intelligence services and a tougher law,” he insists.

But others say legislation will not provide an answer to the fundamental problem.

“Repression alone will not resolve the issue,” says Bernardo Buarque de Hollanda, professor at the Getulio Vargas research foundation and an author of works on football fanaticism.

“At first sight, you think this is just about young men from the suburbs struggling to hold down a job with low educational attainment and low social aspirations,” Buarque de Hollanda told AFP.

But he insists making such generalizations is a risky business.

“I know several leaders of (radical fan) groups with university degrees who live in Rio’s South Zone,” the posh end of the city.