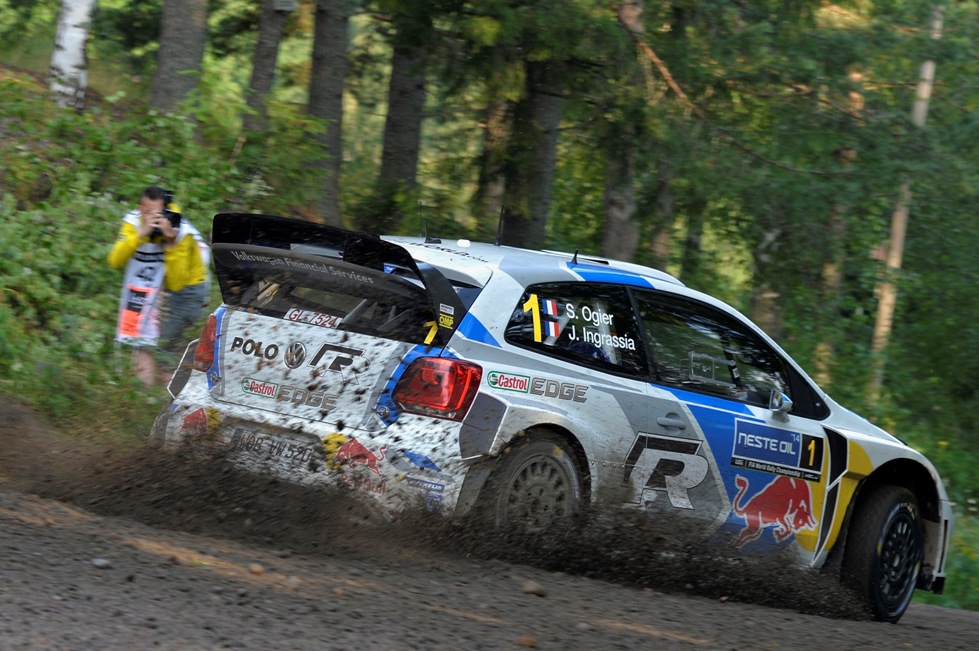 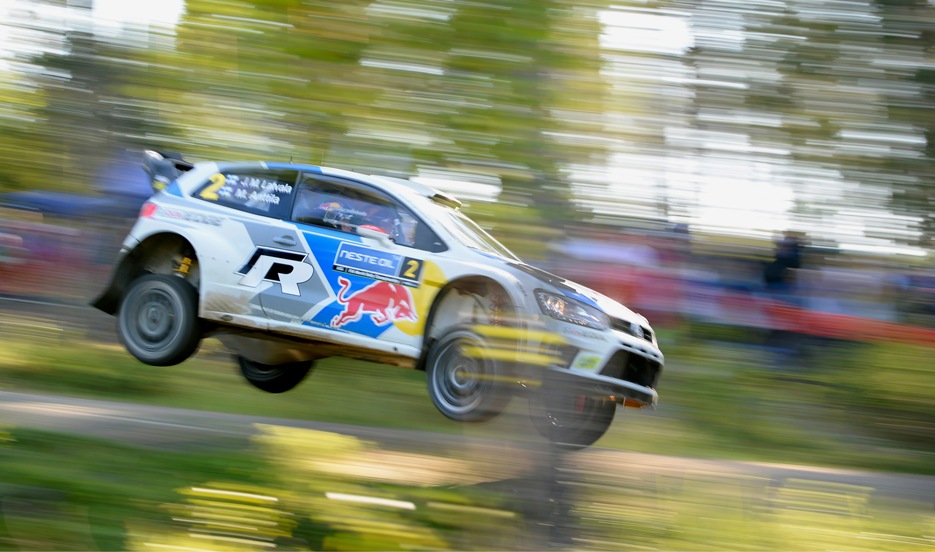 13th and final round: grand finale to the WRC

Final stop in a superlative season for Volkswagen

An open battle at the final rally of the year: Volkswagen duos Sébastien Ogier/Julien Ingrassia (F/F), Jari-Matti Latvala/Miikka Anttila (FIN/FIN) and Andreas Mikkelsen/Ola Fløene (N/N) go into the Rally Great Britain with one common goal – victory. The destinations of the World Championship titles and the top three places in the Drivers’ and Co-Drivers’ competition may already have been decided ahead of the 13th and final round of the FIA World Rally Championship (WRC) in north Wales, but the drivers in the blue, grey and white are as hungry for success as ever. After all, the Rally Great Britain is a genuine classic on the WRC calendar.

Ogier and Ingrassia, who successfully defended their World Championship titles* in Spain three weeks ago, are determined to end their WRC-winning season on a high – just as they did last year. Runners-up in the World Championship, Latvala and Anttila, also have their sights set on a perfect end to the season – as do the third-placed pair of Mikkelsen and Fløene: Latvala/Anttila are gunning for their third victory in Wales, while Mikkelsen/Fløene, who also started out on their rallying career here, will be going flat out for their maiden WRC victory. However, the Volkswagen drivers are not alone in that regard: Ogier, Latvala and Mikkelsen will face another eleven strong opponents from Hyundai, Ford and Citroën in their World Rally Cars in Great Britain.

“The Rally Great Britain promises to be a spectacular finale for fans, drivers and teams alike,” said Volkswagen Motorsport Director Jost Capito. “This classic is one of those rallies that everyone wants to win at least once over the course of their career. The rally in Wales is right up there with the ‘Monte’, the Rally Sweden and the Rally Finland. Unique special stages in unique weather conditions, which are sometimes difficult to judge – these are real challenges. There can be absolutely no doubting the motivation of our Volkswagen drivers. As always, Sébastien Ogier, Jari-Matti Latvala and Andreas Mikkelsen will be given free rein as they look to satisfy their desire to win. Once again: may the best man win.”

The Rally Great Britain is probably the only rally on the WRC calendar, at which fans would be disappointed if they did not have horizontal rain driving into their faces. The weather and the ensuing drama and heroic tales have made the Rally Great Britain world famous. Classic stages like “Gartheiniog”, “Dyfi”, and the section through Clocaenog Forest will once again form the core of the 305.64 kilometres against the clock. The rain usually to be expected in mid-November transforms the gravel roads into a mud-bath, while the fog that hangs menacingly over the forests can severely hamper visibility. In total, the teams face in Wales 23 special stages.

Record-breaking: Volkswagen out to make it a round dozen

Full steam ahead at the 13th rally of the year, with eleven wins already in the bag: Volkswagen’s World Championship-winning team is hell-bent on ending its superlative season on a high. Even before the start of the Rally Great Britain, eleven of a possible 13 victories in one season has seen the Wolfsburg manufacturer equal the record set twice before by WRC rival Citroën (2005 and 2008) – but with a far better win percentage. In Wales, Volkswagen now has the opportunity to surpass the previous best and set a new record for the number of wins in one season.

The latest facts and figures from Volkswagen’s WRC season

Volkswagen also equalled a WRC record at the recent Rally Spain: coming into this season, only Peugeot in 2002 had previously achieved eight one-twos in one season. Volkswagen matched this total this year, claiming the top two positions in Sweden, Mexico, Argentina, Poland, Finland, Australia, France and Spain. Volkswagen is as proud of this achievement as the Polo R WRC has been quick throughout the entire season: Since the Rally Monte Carlo in January, 179 of 226 stage wins have gone to Wolfsburg, as well as 417 of a possible 678 top-three times. The Volkswagen drivers have also won ten of the twelve Power Stages so far in 2014. With bonus points on offer for the fastest three cars, the Polo R WRC has so far scored extra points on 23 occasions.

Duel of the year without any tactical implications: Ogier vs. Latvala – with a bonus

The duel that just keeps on giving: the battle between Sébastien Ogier and Jari-Matti Latvala was already regarded as one of the closest in the history of the World Rally Championship, even before Volkswagen entered the fray. In 2014 the two were separated by under twelve seconds on no fewer than three occasions: Latvala won in Finland, finishing 3.6 seconds ahead of Ogier; in Australia it was Ogier who came home 6.8 seconds ahead of Latvala, and Ogier recently defeated Latvala by just 11.3 seconds in Spain. Coming into the rally in Wales, Ogier has already secured the World Championship title* – and the season’s top two drivers enter this prestigious duel without any tactical considerations. But don’t write off Andreas Mikkelsen: their team-mate has already joined his two more senior colleagues in their battle for victory on at least one occasion this season. He finished just behind Jari-Matti Latvala in Sweden and Sébastien Ogier in Poland. And they are not the only serious contenders: the men driving for the rival teams also have their sights set on victory – particularly Kris Meeke (Citroën) at his home WRC event.


Quotes ahead of the Rally Great Britain

Sébastien Ogier, Volkswagen Polo R WRC #1
“We achieved the biggest goal of the season at the Rally Spain, so the pressure is off. I want to enjoy the last rally of the season, which means getting a good result. Our tests in Wales mean we have prepared perfectly for the complex conditions. The unpredictable weather, in particular, makes the Rally Great Britain very complicated and a real challenge. Experience shows that every driver wants to end the season as strongly as possible at the final rally of the year, before heading into the well-earned break. I can well imagine that Jari-Matti will be looking to celebrate his third win of the season in Wales.”

Jari-Matti Latvala, Volkswagen Polo R WRC #2
“Last year I finished runner-up behind Sébastien. I want to go one better this time around. That would be a really nice way to end the season. I like the Rally Great Britain, because it is so demanding. The special stages are very quick, and demand a flowing driving style. They head through forests, in which there is often a lot of fog, which hampers vision. It rains a lot there at this time of year, which often makes the gravel roads into a real mud-bath. We have even had snow on one occasion in the past, which made it even more slippery. Because the rally is so demanding, you can make up an awful lot of time with a good drive. The Rally Great Britain is the perfect way to end the season.”

Andreas Mikkelsen, Volkswagen Polo R WRC #9
“I want to end the season with a really good result. The Rally Great Britain is particularly dear to my heart, as this is where my career began back in 2006. Since then, it has been like a home rally for me. I feel right at home in Wales, and am very familiar with the conditions. I am optimistic that I might even claim the first WRC win of my career here. Despite this, I will not risk everything to get my first victory. This will come anyway sooner or later. However, the current situation in the championship means I will take a few more risks than usual. Having said that, I must also consider my co-driver Ola Fløene in Wales, who is currently fourth in the Co-Drivers’ Championship, just two points behind Mikko Hirvonen’s co-driver Jarmo Lehtinen. Hopefully we can do something about that.”


Did you know that …

… the spectacular Group B cars made their final appearance in the World Rally Championship here in 1986? The turbo-charged monsters were banned after the season finale, because they had become too fast and dangerous for drivers and spectators alike.

… Volkswagen claimed a one-two at the 2013 Rally Great Britain, courtesy of Sébastien Ogier and Jari-Matti Latvala? This was the second of ten one-twos so far for the Polo R WRC.

… Andreas Mikkelsen finished fifth in 2013 to complete Volkswagen’s best team result at that time? Ogier, Latvala and Mikkelsen have matched, or even surpassed, the first, second and third they achieved in Wales on four occasions already in 2014: in Argentina (1-2-4), Poland (1-2-5), Finland (1-2-4) and Australia (1-2-3).

… Jari-Matti Latvala is the Volkswagen driver who has enjoyed the most success at the Rally Great Britain? He claimed back-to-back victories in Wales with Ford in 2011 and 2012.

… Andreas Mikkelsen launched his WRC career at the Rally Great Britain in 2006? Back then, he was in action at the wheel of a Ford Focus.

… the Rally Great Britain was cancelled in 1957 due to the Suez crisis and the fuel shortage?

… Germany’s Armin Schwarz made an impressive World Championship debut at the Rally Great Britain in 1988? Driving an Audi 200 quattro, he finished fifth.

… Richard Burns became the first Englishman to win the World Rally Championship title at his home event in 2001?

The boss sits on the left, the man on the right is in charge: the “Dyfi” special stage at the Rally Great Britain is 21.9 kilometres long and identical to last year. In just over two minutes 50 seconds, world champion Julien Ingrassia will give world champion Sébastien Ogier exactly 1,064 instructions. Co-driver Ingrassia will read 28 pages of pace notes to his driver during “Dyfi”, each of which contains between 34 and 42 (the maximum is 52) symbols. Each symbol stands for a command.