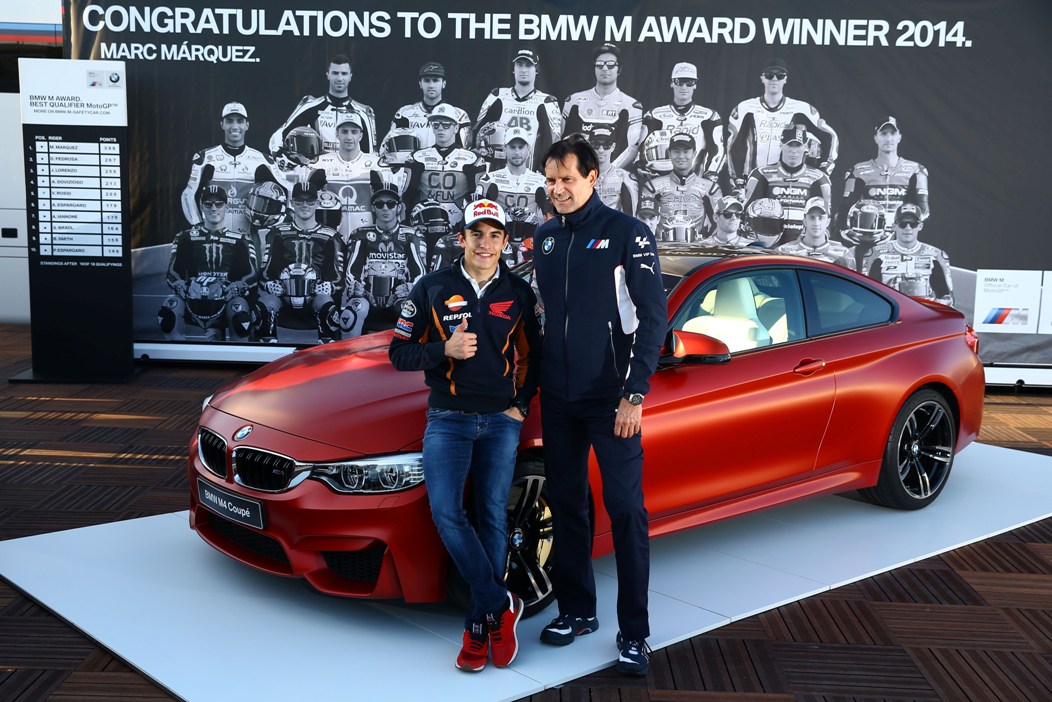 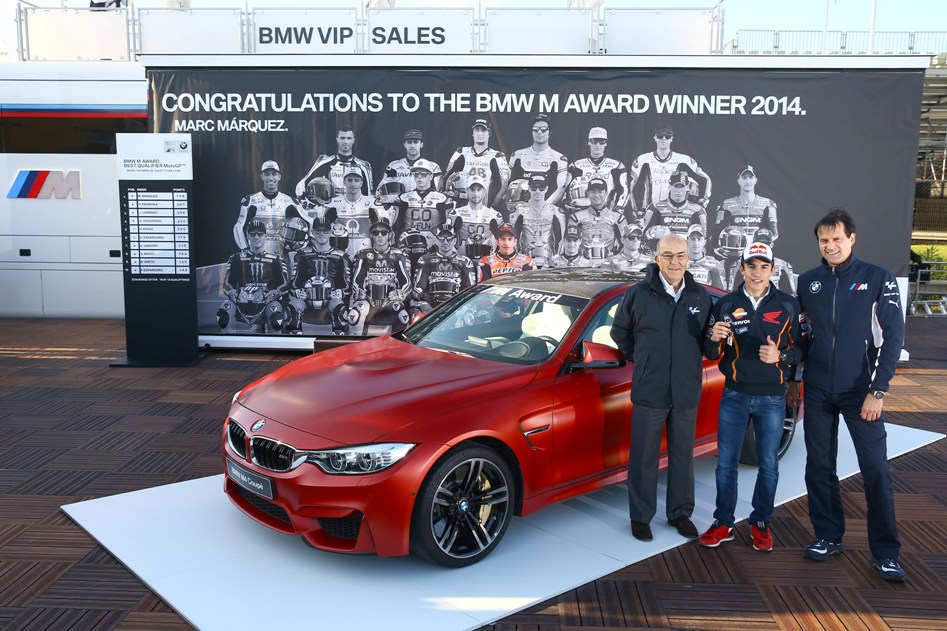 Marc Marquez was unbeatable again in the 2014 MotoGP season – and the young Spaniard also won the race for the coveted BMW M Award again. The 21-year-old was the best qualifier in the premier class of motorcycle racing for the second year in a row to earn his second BMW M Award. This award, in the form of an exclusive and individually customised BMW M car, has been presented by MotoGP partner BMW M GmbH since 2003. Marquez’s outstanding performances in qualifying throughout 2014 were rewarded with an exclusive special edition of the new BMW M4 Coupe.

Marquez, who last year became the first rookie to win the BMW M Award, dominated the 2014 season from the word go. The Spaniard was also in a class of his own in qualifying, as he rocketed to his second World Championship title in MotoGP. Marquez secured pole position for the first six races of the season, picking up maximum points towards the BMW M Award in the process. In total, Marquez started from the very front of the grid on 13 occasions this year. With 398 points, the Spaniard won the 2014 BMW M Award by a comfortable margin. The official presentation ceremony took place on Saturday at the final round of the MotoGP in Valencia, Spain. The prize was presented by Carmelo Ezpeleta, CEO of Dorna Sports, and Thomas Schemera, Director of Sales and Marketing BMW M GmbH.

“Knowing the prize is there at the end of the year gives you special motivation when going for pole on Saturday”, said Marquez. “This year even more so, because I really like this BMW M4 Coupé. I am happy to receive this car and, of course, I will enjoy it.”

“The presentation of the BMW M Award at the final race is always a highlight of the MotoGP season,” said Carmelo Ezpeleta, CEO of Dorna Sports. “BMW M is an important and reliable partner of MotoGP, and it is fantastic that the performances of the top qualifier have now been honoured with such an exclusive, high-performance sports car for the 12th time. In the BMW M4 Coupé, BMW M GmbH has once again provided a captivating car for the winner, which features the latest technology and perfectly combines the values shared by MotoGP and BMW M. Marc Marquez won the 2014 BMW M Award in an impressive manner. I would like to take this opportunity to congratulate him on another outstanding season.”

“Congratulations to Marc Marquez on winning the BMW M Award again,” said Thomas Schemera, Director of Sales and Marketing BMW M GmbH. “Last year he came through as a rookie to defeat his more experienced opponents. In 2014 he raised the bar again with 13 pole positions. It was breath-taking to see how Marc went from one success to the next this year. As partner of MotoGP, we are delighted to once again recognise his achievements with the BMW M Award. Honouring the season’s top qualifier has become an important tradition for us, and we are proud that the BMW M Award is held in such high esteem by the MotoGP riders. They repeatedly confirm that our BMW M high-performance sports cars are much sought-after prizes – and we provided another highlight this year with the new BMW M4 Coupé.”

The BMW M Award for the best qualifier has been presented since 2003. Just like the points system for the races, riders at each Grand Prix weekend are awarded points relative to their positions in qualifying. Pole position is rewarded with 25 points, second place on the grid earns 20 points and third place scores 16 points – right down to one point for 15th. The rider with the most points at the end of the season wins the BMW M Award – in the form of an exclusive and individually customised BMW M car. Valentino Rossi and Casey Stoner are the current record holders, each with three BMW M Awards to their name. In 2013, Marc Marquez was crowned the youngest ever winner of the BMW M Award, and the first rider to receive this award in his first season at the pinnacle of motorcycle racing. Marquez has now won the BMW M Award for the second time. His compatriot Jorge Lorenzo has also earned the coveted title of top qualifier twice so far. Sete Gibernau and Nicky Hayden have both won the BMW M Award once.

BMW M GmbH is a 100 per cent subsidiary of BMW AG. With its products and services in the five business areas of BMW M Automobiles and BMW M Performance Automobiles, BMW Individual, M Sports Options and Packages, and BMW Group Driving Experience, as well as Safety, Emergency and Special-Purpose Vehicles, it is geared towards customers with particularly high aspirations in terms of the performance, exclusivity and individual style of their vehicle. Based in Munich, the company was founded in 1972 as BMW Motorsport GmbH. Since then, the letter M has become synonymous all over the world for success in motor racing and for the fascination of high-performance sports cars for road use.