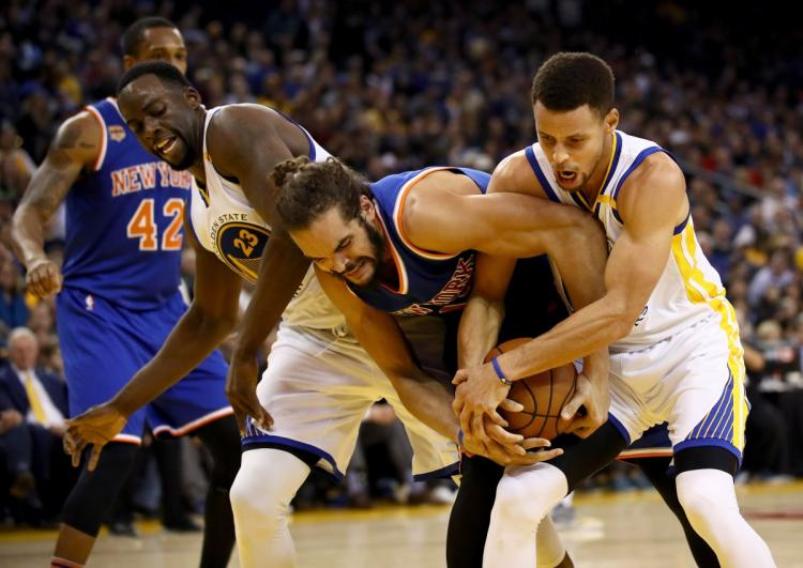 Klay Thompson scored a game-high 25 points as the Golden State Warriors posted their fifth straight victory over the shorthanded New York Knicks with a 103-90 win on Thursday.

JaVale McGee made the most of a rare start by tallying 17 points for the Warriors who improved to a league best 23-4 with the win.

The Warriors remarkably recorded assists on every basket until the streak was broken late in the third period by a driving hoop by reserve guard Ian Clark.

The 41 total assists gave Golden State at least 30 in 19 of their 27 games this season. No other NBA team has reached 30 more than four times.

“We had great flow and trust in each other,” said Thompson.

Kevin Durant finished just shy of a triple-double with 15 points and a game-high 14 rebounds to go with eight assists. Draymond Green grabbed 11 rebounds and had five points, while Stephen Curry finished with a season-low eight points and eight assists.

Reserves Justin Holiday (15) and Ron Baker (13) were the leading scorers for the Knicks, who fell to 2-2 on a five-game Western swing that began with a pair of wins.

Anthony and Rose are both questionable for the trip finale Saturday in Denver.

Elsewhere, Kawhi Leonard and Pau Gasol scored 18 points apiece and the San Antonio Spurs used a 21-3 run in the fourth quarter to put away the host Phoenix Suns 107-92.

The Spurs hadn’t played on the road since absorbing their lone loss, 95-91 against Chicago Bulls on December 8. Leonard and Gasol grabbed 10 and nine rebounds, respectively.

Devin Booker had 17 points and Eric Bledsoe added 14 for Phoenix, which hung with San Antonio for three quarters before falling victim to the decisive run.

“We have such a deep group; we don’t play our guys a lot of minutes so we’re able to sustain our effort for the whole game,” Gasol said.

“When teams ramp it up and make their runs and even get ahead, it’s hard for them to sustain that.

“Our second halves and our fourth quarters are strong because we keep coming until we break the game open.”

Down by nine late in the third quarter, the Suns rallied and took their last lead at 77-76 on a Leandro Barbosa three-point play with 10:08 left.

But Phoenix scored only one basket over the next six minutes while the Spurs ran away and stretched their lead to 17 at 97-80 on Aldridge’s hook shot with 4:19 left.

“We finally took care of the ball. It’s tough to score when you keep giving it away,” Spurs coach Gregg Popovich said.

In Milwaukee, Australian Matthew Dellavedova drained a three-pointer that restored a double-digit lead with 94 seconds left as the Bucks held off a late charge by the Chicago Bulls to win 108-97. – Agence France-Presse