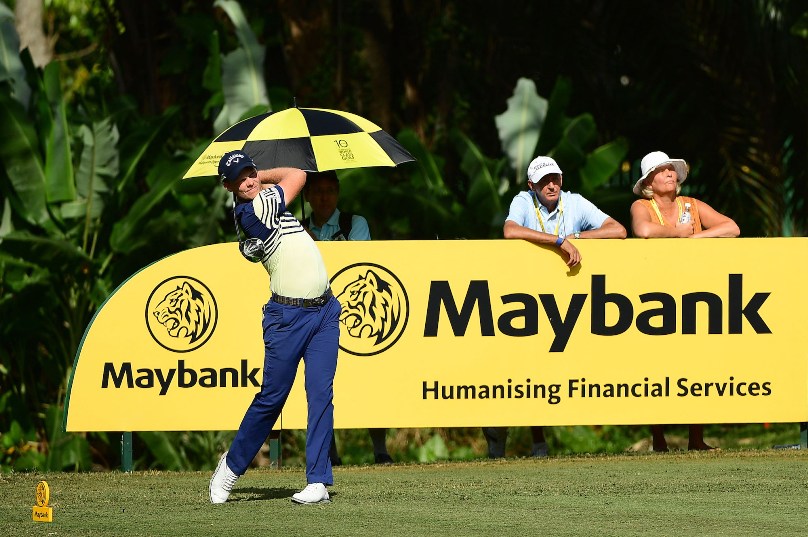 Bernd Wiesberger became the first man to sink nine consecutive birdies on the Asian Tour and European Tour as he seized a one-shot halfway lead at the Maybank Championship on Friday.

The towering Austrian got hot from the seventh hole to 15th hole at the Saujana Golf and Country Club to shoot a spectacular nine-under-par 63 for a 12-under-par 132 aggregate in the US$3 million co-sanctioned tournament.

Masters Tournament champion Danny Willet (main pix) of England, who at 15th in the world is the highest ranked player in the field, surged into contention with a 67 to trail Wiesberger heading into the weekend rounds.

A further stroke back and bunched on 138 include the likes of 2015 Asian Tour Order of Merit champion Anirban Lahiri of India (68), countryman Shiv Kapur (67) and Hong Kong Open champion Sam Brazel of Australia (71).

The 31-year-old Wiesberger, who has won in Indonesia and Korea previously, finished runner-up in his last visit to Malaysia two years ago and his career equaling low round has set him up for fourth European Tour title.

I really tried to cut down on the shots. I felt a bit beside myself to be honest, I just kept it going, I felt like I was on a good run and I felt comfortable pretty much the whole day after my bogey on four. I hit really good shots and I just felt calm out there. It felt kind of natural, I hit pretty good shots and really only holed two long ones which were the last birdie of the nine on 15 and about a 20-footer on 11.

Apart from that I just hit them pretty close and felt like I had a good idea of what the ball was going to do on the green today again which was nice. It was nice to birdie the last. I felt like it was a good finish to what was a great round. I obviously felt a bit disappointed on 16 and 17 to let it slip a bit but all in all it was amazing out there and really good fun. The guys (Carlos Pigem and Kiradech Aphibarnrat) kept me at ease and let me just do my thing and it was good chemistry out there.

I played really good yesterday and it was a little bit scrappy today, but there was a storm brewing a few hours ago and the wind was flicking around so it was tough to get the club right so I scored nicely this afternoon. I holed a couple of nice putts when I needed to. I missed a couple of good chances too but if someone told me at the start of the say five under I would have bitten their hand off.

I’m putting better. Everything is pretty good but putting has been good. Last year, for the last six months, I didn’t putt good. So I changed my putting style in December. Last time, I addressed with the putter on the heel but I have now made the putter a bit flatter to the ground. I’m also trying to putt from low to high to get the ball to roll better from off the face. It feels much better.

If I can play another three or four under round, I’ll be happy and will have a chance to win. I hope to win an European Tour title but we’ve got two rounds to go. It’s not easy. There are many good players on the leaderboard but I’ll give it a try.

Really pleased. Played pretty solid. Got the start I wanted and made four birdies on the back nine (his opening nine) and kept it going on the front. Pretty happy. Had a few chances for birdies but couldn’t convert. I think I played pretty solid. I only missed three greens on the front nine and made good up and downs. Pretty pleased and just want to continue doing the same. It’s great to finish well. It’ll be good if I can just do the same thing this weekend.

Scores after round 2 of the Maybank Championship being played at the par 72, 7186 Yards Saujana GCC course (am – denotes amateur):