Home 2023 With the genes of Sprinter & Co.: The Daimler motorised business vehicle... 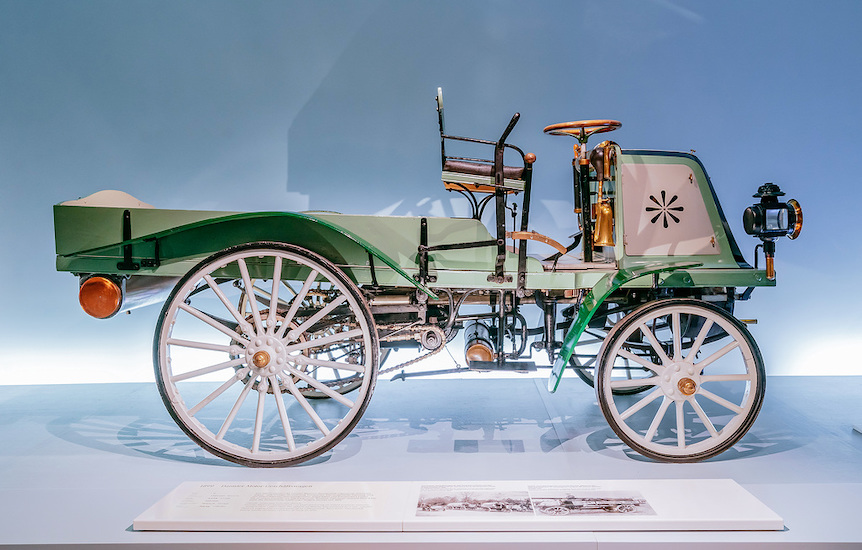 Tubular radiator: The high-performance technology of its time

Expansion of the Daimler-Motoren-Gesellschaft product range from 1897

“Close-up” – the name of this series by the Mercedes-Benz Museum says it all. Each instalment tells a surprising, exciting, or behind-the-scenes story. To do this, it focuses on details of a vehicle, an exhibition item or an element of architecture and design. In the spotlight this time: the Daimler motorised business vehicle.

No. 8/2022: The Daimler motorised business vehicle

Increased power: What is the function of the circular component with the hole pattern on the front of the 1899 Daimler motorised business vehicle? The inlets behind the sieve-like plate are the air ducts of a tubular radiator invented by mobility pioneer Wilhelm Maybach. With this innovation, Maybach significantly improved engine cooling and thus the performance of the automobiles built by Daimler. The tubular radiator was first used 125 years ago, in the Phoenix model, and utility model protection was registered on 24 December 1897. December of that same year saw the introduction of the Daimler-Motoren-Gesellschaft (DMG) motorised business vehicles.

Evolution: DMG continued to improve its van models. The exhibit in Legend Room 1: “Pioneers – The invention of the automobile” at the Mercedes-Benz Museum was built in 1899, two years after the premiere of this model family. This motorised business vehicle was designed for a 500-kilogram payload. It is powered by a 4.1 kW (5.6 hp) two-cylinder engine with a displacement of 1,527 cubic centimetres and has a top speed of 16 km/h.

Innovation platform with the genes of a horse-drawn cart: Compared to the illustration in the first sales advertisement, the vehicle soon changed. In 1897, it was still a delivery van with the engine under the seat and a free-standing steering column. The example at the Museum, dating from 1899, has the engine located above the front axle, protected by a high bonnet. Directly below it is the tubular radiator with the starting crank in its centre.

These innovative details stand in contrast to the traditional design features: the driver sat on an open bench with no protection from the weather. It resembles the workplace of a coachman delivering goods with his horse and cart. Nevertheless, the motorised business vehicle clearly represented a departure from the era of the horse-drawn coach: in front of the driver is the vertical steering column with wooden steering wheel. Outside, on the right, is the gear lever in an open shift gate. And the large horn commands attention in traffic.

Power transmission and rubber wheels: The engine power is transmitted to the rear wheels via two chain wheels and two roller chains. This distinguishes the transporter from the pinion-driven DMG trucks that had been built since 1896. The spoked wooden wheels are significantly larger at the rear than at the front, with solid rubber tyres all round.

This was a real comfort feature in commercial vehicles at the end of the 19th century, as delivery trucks and lorries often drove on steel-tyred wooden wheels. Daimler charged an extra 350 to 400 marks for these solid rubber wheels in 1897. For vehicles with a payload of more than 1,200 kilograms, DMG advised against using the rubber-shod wheels: “Rubber tyres are not recommended for these larger wagons,” the DMG sales list states. 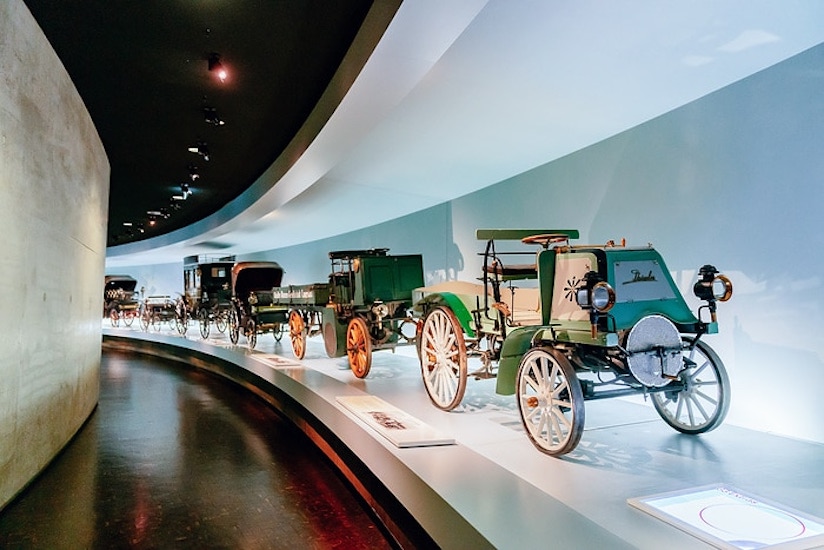 Five winners: The “business vehicle” was an expert when it came to flexible logistics. This strength still characterises Mercedes-Benz vans today. “Daimler business vehicles are a particular speciality among motorised vehicles,” the Daimler-Motoren-Gesellschaft (DMG) advertised in 1897.

The sales advertisement highlighted the delivery van’s versatility: the loading area can be used with a box body, as a platform or with bench seats (“for excursions and for passenger transport”). The Cannstatt-based company offered five different versions of the motorised business vehicle. The payload was between 500 and 2,000 kilograms. Initially, the vehicles were powered by engines delivering 2.2 kW (3 hp) to 7.4 kW (10 hp).

Mini to maxi: The length (3,400 to 4,600 millimetres), width (1,700 to 1,800 millimetres) and weight (1,000 to 2,500 kilograms) of the motorised business vehicles varied according to payload. This underlined the diversity of this very recently introduced vehicle concept. Only the year before, Benz & Cie. had presented a comparable vehicle in Mannheim and founded the segment with its “delivery van”.

Van-building tradition: The success story of Mercedes-Benz light commercial vehicles stretches from the first vans of 1896 and 1897 to the Sprinter, Vito and Citan. Their antecedents revolutionised flexible and fast logistics with the combustion engine at the end of the 19th century. Today, Mercedes-Benz vans stand for a new era in sustainable and emission-free mobility for goods transport, the manual trades, delivery services and much more. The Mercedes-Benz Museum displays several representatives of this long success story.