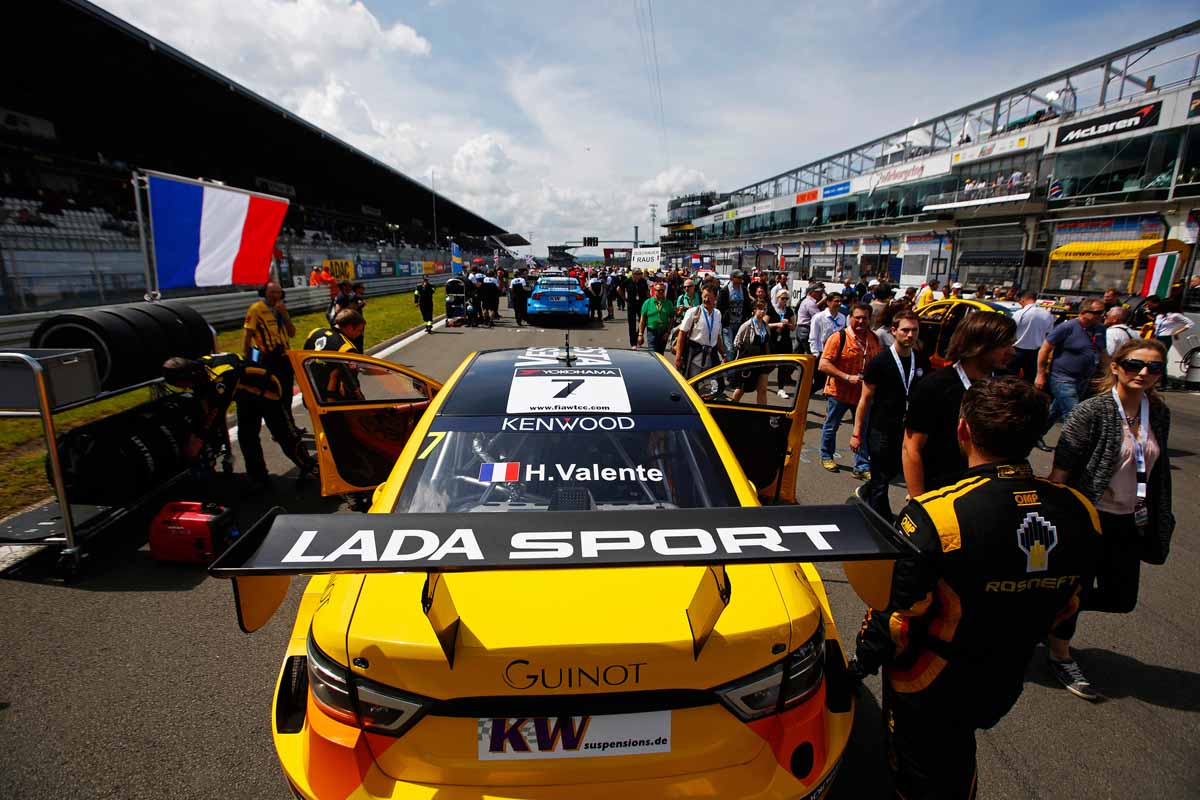 LADA SPORT ROSNEFT came away from the FIA World Touring Car Championship (WTCC) Race of Germany on the world-renowned Nurburgring Nordschleife with a pair of top six finishes (Saturday 28 May). French racer Hugo Valente led the LADA charge in sixth in the Opening Race and Nick Catsburg from the Netherlands finished sixth in the day’s Main Race on the 25.3km racetrack, nestled deep in Germany’s Eifel Mountains.

The Opening Race started without haste, but turned into an incident-packed affair, as a final-lap tyre failure for leader Tiago Monteiro initiated a dramatic collision that took him and Yvan Muller out of the race. All three LADA SPORT ROSNEFT drivers finished inside the top ten and Valente was satisfied to lead the Russian team’s charge in sixth, with Tarquini and Catsburg shadowing him in seventh and ninth respectively.

However, attention was squarely on the durability of the WTCC’s control tyres, as the failure that claimed Monteiro was the last of many at ‘The Ring’, with Valente himself a victim of two blow outs in free practice and qualifying.

A field of concerned and frustrated drivers lacked confidence after being advised not to push and to avoid the kerbing while flying through the forest on the Nordschleife, and the instructions only served to dilute the on-track action in the Main Race.

Tarquini and Valente sat in seventh and eighth after a typically physical start, sticking their elbows out and muscling their way through the first corner complex to commence a race-long battle with the Volvos of Fredrik Ekblom and Thed Bjork.

Italian touring car veteran, Tarquini, drove the widest LADA Vesta on the track in defence of seventh place and, although he and his young French teammate, Valente, soaked up immense pressure, they were ultimately out-dragged in the Nordschleife’s protracted acceleration zones and crossed the line in eighth and tenth, with Catsburg coming home in a solid sixth.

Reflecting on generally positive, if not slightly frustrating outing at the Nurburgring, Catsburg said: “I didn’t feel comfortable in the car because we were all a bit afraid about the tyres, so I took it easy and just brought it home. Had we been able to push, I think a podium might have been possible in the Main Race”.

Valente added: “The car wasn’t performing as well as in free practice and qualifying, because there were concerns over the tyres and we had to make changes that we’ve never done before, but my progress was good and I don’t think we could have asked for more than a sixth place in the Opening Race. We struggled in a straight line and we were advised to be cautious on the Nordschleife to save the tyres. We’ve had a lot of punctures, not just at the Nurburgring, but at normal circuits too, and it’s a shame that no action has been taken with the tyres before this weekend.”

Tarquini said: “I can’t be satisfied with the results, as I wasn’t able to push in the races. Tyres have been a big problem this weekend and it’s not the place to have this issue, as we’re in a forest, you reach very high speeds and there’s very little room for error. Cars are faster and heavier than last year and the problem must be analysed. You can’t race at a track like this, fearing that the tyres might let go and I was more of a taxi driver on the Nordschleife today.”

The FIA World Touring Car Championship (WTCC) moves on to LADA SPORT ROSNEFT’s homeland, Russia, and the Moscow Raceway for Rounds 11 and 12 of the 2016 season (10-12 June).