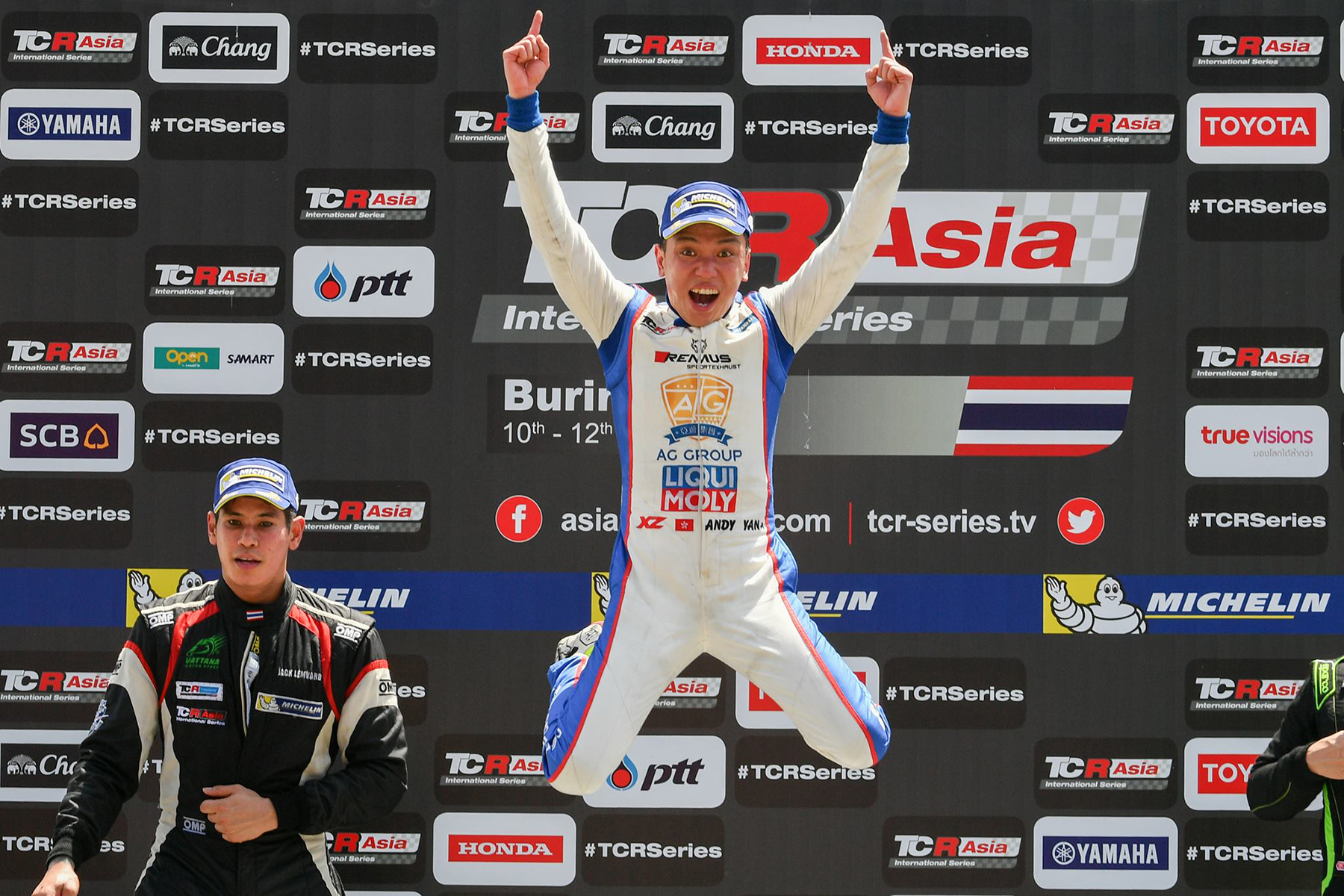 The Buriram round of the TCR Asia Series promised plenty of action, the battle through practice and qualifying between points leader Tin Sritrai, compatriot and series debutante Jack Lemvard and Volkswagen’s Andy Yan had fans anxious in anticipation for what was to come. Sadly though the equation lost Sritrai early in proceedings, the Team Thailand star failing to finish either race with technical issues with the Honda, whilst Lemvard’s challenge ultimately fell short after contact with Kevin Tse in race two, but there was no denying the man of the weekend – Liqui Moly Team Engstler’s Andy Yan – the Hong Kong driver claiming back-to-back wins – his first ever in TCR – and with it, a solid lead in the 2016 championship.

Kevin Tse too was a big winner, the TeamWork Motorsport Volkswagen driver claiming a win and a second in the Amateur points battle, to take a commanding lead into the third event of the season at Shanghai.

Round#3 (15-laps)
Off pole position, Jack Lemvard held the lead into the fast right-hander with Vattana Motorsport team-mate Narasak Ittiritpong in close pursuit, whilst behind them Andy Yan held out Kevin Tse and team-mate Filipe de Souza for third.

Viper Niza Racing’s Douglas Khoo had a monster start to be seventh behind Patritat Bulbon, the two Seat Leon drivers latching onto the rear of the leaders on the run down to turn two where Yan quickly made his intentions felt.

It didn’t take long for the multiple China Touring Car champion to move into second after Ittiritpong ran wide at turn three, with Kevin Tse following him through in the TeamWork Motorsport Golf.

The big mover, and the man behind the success of the Thailand TCR Series – Paritat Bulbon – was also on the move, leap-frogging de Souza at the final turn on the second lap, with the slow starting Henry Ho and Nattachak Hanjitkasem following closely behind.

Yan by this stage was monstering Lemvard all over the circuit, but the local star knew exactly where to place his Vattana Motorsport Seat, but on lap five, the Volkswagen driver took advantage of the Lemvard running slightly off line into turn one, to pull alongside in a drag race to turn two and take the position away.

From there it was fait-accompli with the Liqui Moly Team Engstler driver extending his lead with every lap to cross the line almost three seconds clear of Lemvard, with the recovering Ittiritpong third. Henry Ho overcame some of his qualifying electrical woes to grab fourth from Filipe de Souza who had enjoyed one of his best ever races in the TCR category.

Sadly we lost two of the TCR Asia Series stars in the early laps, the most notable being points leader Tin Sritrai. The young Thai was forced back into the pits on lap three with a turbo issue, although it was a relatively easy fix, a late night engine change after an overheating issue in practice seeing the team frustrated by something which had been left untightened.

For Kenneth Ma though, the series stalwart was forced back into pit lane not long after Sritrai with an ECU issue, something which the RoadStar team had been managing across the weekend, but something that Ma lamented might not be repairable at the circuit.

In the battle for Amateur points, Nattachak Hanjitkasem took the top spot by virtue of finishing sixth, one place ahead of the luckless Kevin Tse who was forced to commit a drive through penalty early in the race after contact with Ittiritpong, whilst Douglas Khoo was a joyous but exhausted third, having gained significant ground over his pace in South Korea.

Round#4 (15-laps)?
With a reverse grid top ten, Yan would start tenth with rival Lemvard alongside but with the inside run to turn one. Terrence Tse started off pole, and the RoadStar Racing Seat driver made the most of the position to lead all the way to turn 12, before contact with Lemvard saw him pushed to the outside of the circuit.

Off the back the big mover was Sritrai, the local hero quickly through the field to be third and on the tail of Kevin Tse by lap two, the TeamWork Motorsport driver having taken advantage of Lemvard’s contact with Tse to grab second behind Yan, but not before contact between the two which dropped Lemvard back to seventh.

Sritrai was on a charge, and on lap four he took a big dive up the inside of Tse on the final corner, but was carrying too much speed, overshooting his braking point to allow the Volkswagen driver back into position. This worked perfectly into Yan’s hands, the Liqui Moly Team Engstler driver extending his lead marginally with each lap as Sritrai fell back into the clutches of Ho, before sadly being forced back down pit lane, this time with a repeat of his practice issue – overheating.

Despite an ill-handling car after contact with Tse on lap two, Lemvard continued to battle, latching onto the tail of de Souza in a fight that went all the way down to the final lap, the pair finishing fourth and fifth with Ho inheriting third after Sritrai’s demise.

Ultimately Tse could do little about Yan, the two Volkswagen drivers just too good for their rivals, although the TeamWork driver did close down the gap in the closing stages to finish just 3.6-seconds down, and six seconds up on Ho’s Honda.

Tse’s second place also handed him the top Amateur points for the weekend, turning the tables on the consistent Hanjitkasem who was again sixth, with Paritat Bulbon hanging on for a well deserved third.

Douglas Khoo was fourth in the Amateur battle ahead of pole-sitter Terrence Tse and TeamWork’s Bill O’Brien, the American having overcome a frustrating start to the weekend with a technical issue that saw him stranded in the pits through much of practice.

For Kenneth Ma, the experienced Hong Kong touring car driver and team boss battled on with his electrical issues, completing the full quota of laps to be eleveth.

The championship now takes an extended break, with the third event of the season scheduled for Shanghai, China on the 19-21 August.
What the drivers had to say..

1. Andy Yan (#3 Liqui Moly Team Engstler Volkswagen Golf GTi TCR)
“For me and the team it’s a fantastic weekend – two victories. My start was quite good in race two, but there was a lot of overtaking. For the first two laps I just concentrated on the job at hand, at staying safe, and avoiding contact. From there the car was fantastic, very steady and got me home for the win. I really enjoyed the weekend in Thailand, now it’s time to go forward and fight for the championship.”

2. Kevin Tse (#8 TeamWork Motorsport Volkswagen Golf GTi TCR)
“I said this morning that I wanted to be on the overall podium, and I did it, so I’m very happy. It was a very chaotic race, Andy [Yan] started tenth and I started ninth and we finished 1-2, which is some kind of miracle because it was almost like a blur to me from lap one to lap three. We cut through the traffic very well, but I knew it was Andy in front of me, and when it’s Andy, once he’s gone, he’s gone!”

3. Henry Ho (#88 Champ Motorsport Honda Civic TCR)
“It was a very tough weekend. Basically I didn’t drive much through testing and practice because despite the fact we thought we’d solved the electrical problems we had from South Korea, it turned out nothing had changed. I was having rev cuts at 5000rpm, they seem to have solved that for race two, but there was another issue which kept me from attacking the leaders, so I just held my ground to the flag.”