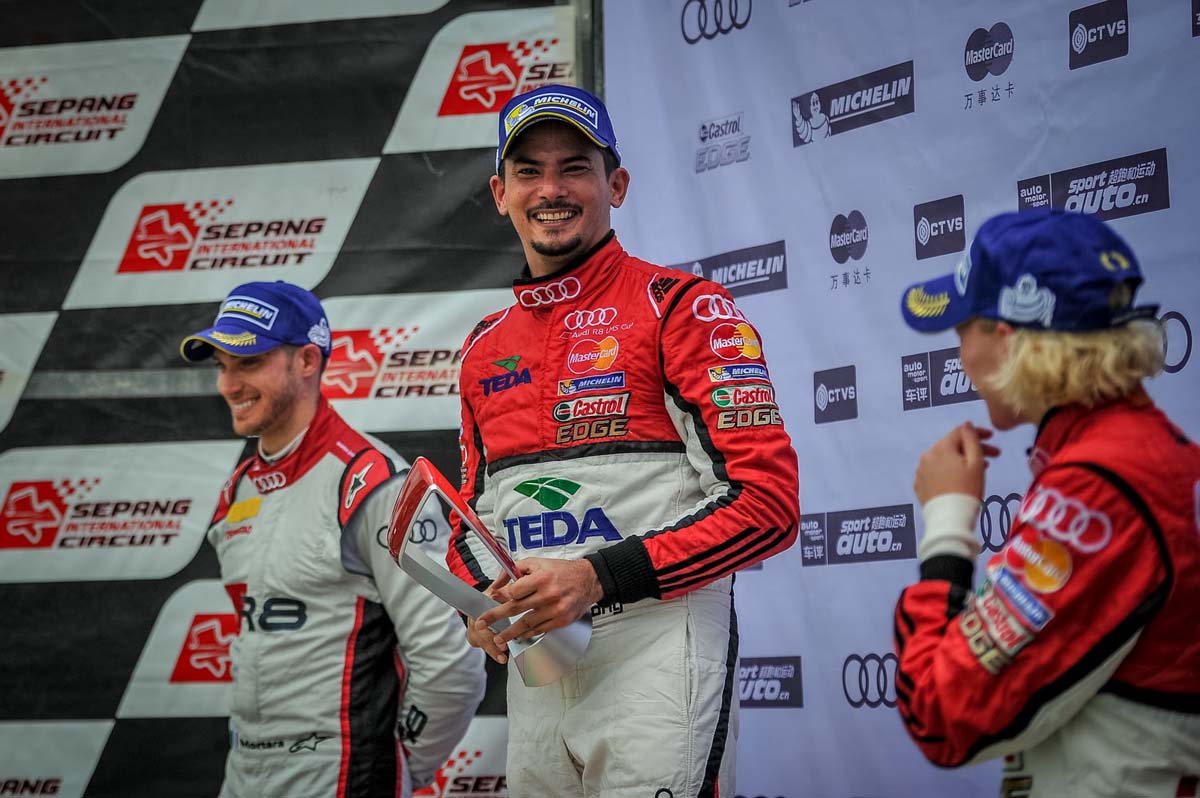 Sepang, August 14, 2016 – Competition at the top of the Audi R8 LMS Cup could not be any tighter at the halfway stage of the GT3 series’ 5th season. Audi TEDA Racing Team’s Alex Yoong and Alessio Picariello of MGT Team by Absolute are both tied on 95 championship points, with reigning Cup champion Yoong ahead of his young Belgian rival by way of his two race victories so far this season. One of those victories came in Round 5 in Sepang, where the local star got away magnificently after lights-out on the rolling start. Yoong utilized his new tyres to storm past the top three drivers – Rahel Frey of Castrol Racing Team, Picariello and pole-sitter Edoardo Mortara of Phoenix Racing Asia – to take the lead into turn one.

It was a lead he held onto until the chequered flag, finishing ahead of DTM star Mortara and Frey, who had got past Picariello to finish third. The nail-biting battle in Round 6 between Mortara and Picariello was the highlight of the day. In the lights to flag tussle, Picariello – free of the 35 kilograms of success ballast that weighed him down in the morning’s race – repeatedly knocked at the door of Mortara, who was now the one to carry 35 extra kilograms for his P2 finish in Round 5. Frey was always in close pursuit, waiting to capitalise on any mistakes from the front two.

Few were made, with Mortara’s expert defence securing him the top step of the podium, just half a second ahead of Picariello. Crossing the line just behind them both was Frey, whose double-podium over the weekend was enough to bounce her above Martin Rump of Champion Racing Team into third in the overall championship. Rump scored the fastest lap time in Round 6, but was not able to capitalize on his pace after early contact set him back.

In the Amateur Cup, Jeffrey Lee of Team Audi Volkswagen Taiwan showed his dominance yet again scoring two wins. Vincent Floirendo of EN Sport by Absolute came second ahead of Johnson Huang of Absolute Racing in Round 5, with their roles reversed in Round 6.

“The weekend was another enthralling one for the Audi R8 LMS Cup at Sepang with everyone entertained by the edge-of-the-seat battles,” said Bernd Goeres, Director of Audi Sport customer racing Asia. “The race for the championship is wide open moving into the second-half of the season.”

Rounds 7 and 8 of the Audi R8 LMS Cup will take place on September 24 and 25 at the Korea International Circuit in Yeongam, Korea.

The Audi R8 LMS Cup is operated by Audi China and is part of the Audi Sport customer racing Asia programme. The championship is run in cooperation with FAW-Volkswagen Audi, Audi Hong Kong, Audi Korea, Audi Taiwan and Audi Malaysia.

Alex Yoong (Audi TEDA Racing Team)
“It’s a real relief. Discussing with my engineers to use new tyres for race one was risky but we had to make use of it. We chose a very aggressive setup. After a great start I had a perfect four laps and was able to settle into the lead. It’s been great winning on my home turf in front of my family, friends and supporters.”

Edoardo Mortara (Phoenix Racing Asia)
“I raced more than half of the race without traction control. It was the toughest race in my career because of the intense heat, the wearing of the brakes and tyre degredation. But in the end I’m very happy.”

Alessio Picariello (MGT Team by Absolute)
“I wanted to win. I showed Edoardo where I was trying to pass too many times so he ended up being able to defend very well.”

Rahel Frey (Castrol Racing Team)
“Finishing on the podium was ok. At least I got some important points. It was fun watching the lead battle from behind.”