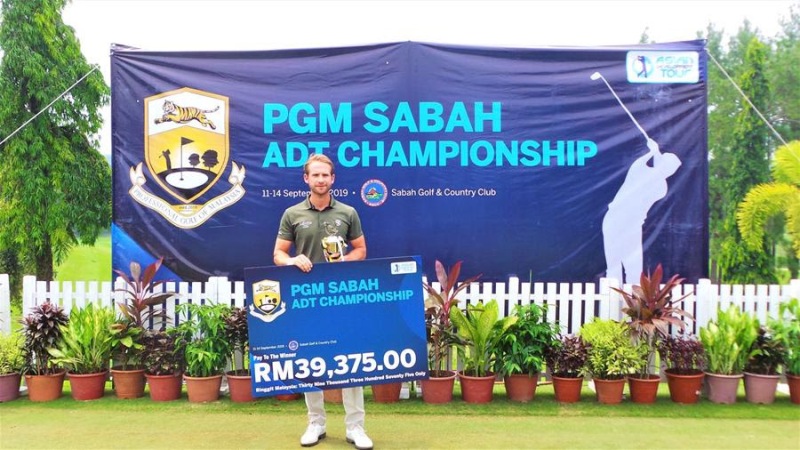 The 31-year-old Swede was a bundle of nerves as he battled to a final round of five-over-par 77 to finish on eight-under-par 280 total at the Sabah Golf and Country Club on Saturday.

Zetterwallwon by just one shot from last year’s Malaysian champion Ben Leong, who closed with a 71, as Erwan Vieilledent of France settled for third place, a further shot back on 282 after matching Leong’s effort.

Zetterwall headed into the final round with a commanding seven-shot lead but made three bogeys and two double bogeys in the first 11 holes which almost denied him his first success since winning the 2016 Ciputra Golfpreneur Tournament in Jakarta.

A double bogey on 11 saw his lead trimmed to just one shot, but Zetterwall managed to regroup and steady the ship in the last seven holes to seal the long-awaited win.

“I started off missing some wild shots off the tee in the beginning but I recovered okay until I made the double bogey on seven.

“As my playing partners Ben and Erwan were making lots of birdies, I was missing my par putts.

“In the back nine, I started to play a little bit better. I made a good putt (for par) on 16 which was absolutely important for me to reclaim the two shots lead there.

“Then on (par-five) 18, it was a big relief that I was able to hit my second shot onto the green and three putted it for a one-shot victory,” said Zetterwall, who picked up RM39,375 (US$9,397)and an invaluable six Official World Golf Ranking (OWGR) points for his effort.

Zetterwall admitted  there was one point, after double bogeying the 11, that he thought that the title could slip through his grasp.

“On 11, I had a terrible tee shot and missed the green. Hit my bunker shot to like five feet but it lipped out for a double bogey. Ben and Erwan both made good par saves.

“I didn’t feel really comfortable at that point. Nothing seemed to be working, I was hitting bad shots, missing short putts, while Ben and Erwan were playing solid.

“Eventhough I shot a five-over, I’m pleased that I manage to keep it together on my last five holes,” said Zetterwall.

The victory swiftly put Zetterwall’s bid to earn an Asian Tour card by finishing in top-seven on the Order of Merit back on track.

“I didn’t play really good in the early season and went back home to play in the Nordic Golf League (a third-tier circuit in Europe) to regain my form. The plans worked great and I feel like I found the stability in my game which I hope to build on it on my return to Asia.

“Now I’m looking forward to playing in all the ADT tournaments left in the schedule because it has always been my goal to regain my Asian Tour card (which he lost in 2017 after playing just one season).

“I believe there is still every chance of me getting into the top-seven, now that my confidence has been restored,” said Zatterwall.