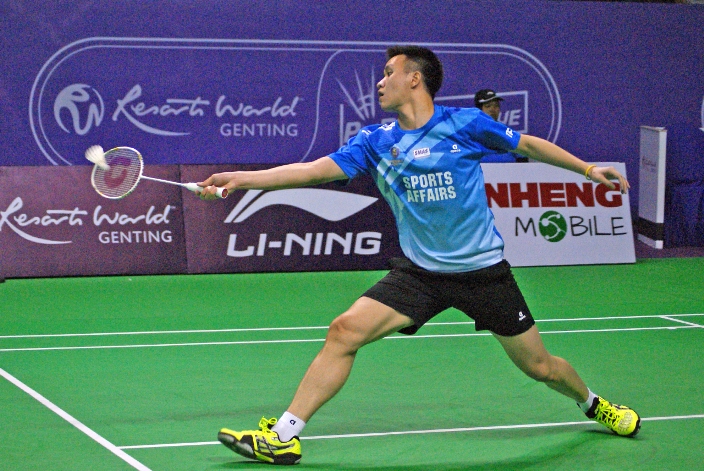 # Srikanth gets sweets revenge over Iskandar with smashing win

Srikanth was beaten 27-25, 21-9 by the 24-year-old Malaysian in the semi-finals in last week’s Victor Far East Malaysia Masters in Penang. But this time around at the Babu Banarasi Das Indoor Stadium it was the Indian ace who dictated terms in front of his home fans for his win in 32 minutes.

In the quarter-finals on Friday the Indian will be up against another Malaysian Goh Soon Huat who enjoying a good run in Lucknow. Soon Huat upset 10th seed Jeon Hyeok-jin of South Korea in the third round with a 21-13, 21-16 win in 48 minutes.

Malaysia’s former Asian and World junior champion Zulfadli Zulkifli fought his way back from a set down to beat teammate Goh Giap Chin 13-21, 21-16, 21-16 to earn a quarter-final clash against Thai ace Boonsak Ponsana.

Beleaguered Chong Wei Feng’s miserable form of late continued when he was shown the exit by China’s Shi Yuqi who won 21-18, 21-19.

The country’s top doubles pair Goh V Shem-Tan Wee Kiong were fully stretched in their upset win over Korean fourth seeds Ko Syung-hyun-Shin Baek-shoel to advance to the quarter-finals. The Malaysians toiled for 48 minutes for their 21-14, 14-21, 24-22 win.

Malaysia stayed alive in the mixed doubles when Chan Peng Soon-Lai Pei Jing marched into the quarter-finals with a 21-14, 21-17 win over India’s Pranaav Jerry Chopra-Nelakurihi Sikki Reddy in the second round.

Malaysia’s campaign in the women’s singles came to an end when world junior champion Goh Jin Wei lost 17-21, 10-21 to sixth seed Yui Hashimoto of Japan in her second round match.