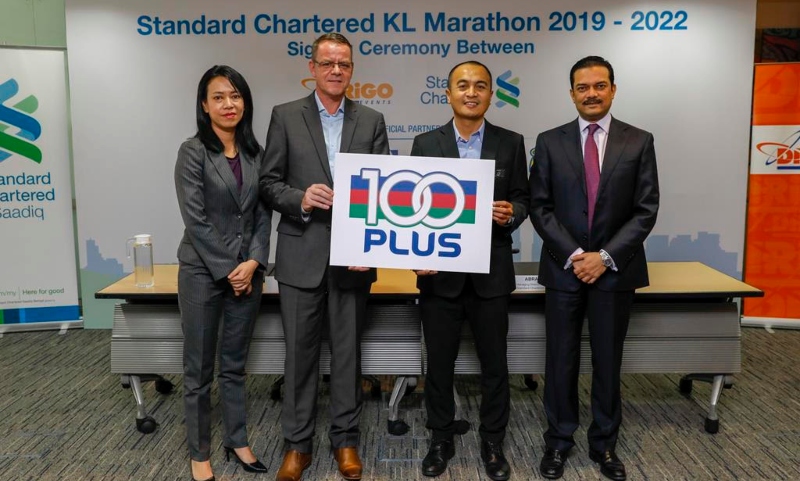 100PLUS is celebrating its return as an Official Partner of the Standard Chartered KL Marathon 2019 (SCKLM) by offering 100 free entries for runners to participate in the nation’s premier marathon on Sept 29.

With all entries for this year already taken up through the official channel including the recent ballot, 100PLUS is providing another lifeline for runners to participate via the 100PLUS SCKLM contest.

The contest goes live on the 100PLUS Facebook (https://www.facebook.com/my100plus/) on Monday, March 4th and will end on March 18th. Contestants will have to snap a photo, tag a friend and submit their entries. At the end of the contest, 50 lucky winners will win two SCKLM entries each. Detailed mechanics, and the terms and conditions are available on the 100PLUS Facebook.

“Everyone involved in this year’s KL Marathon will be pleased to know that 100PLUS will be back to rehydrate them once again. 100PLUS will be setting up drink stations along the routes for the benefit of the 38,000 runners,” said Graham Lim, Marketing Director of F&N Beverages Marketing Sdn Bhd today.

“At this year’s SCKLM public will get to taste 100PLUS Active, a product intended for thirst quenching by providing sufficient energy during and after sports to replace fluids lost in sweat. This non-carbonated Isotonic drink rehydrates, replenishes and re-energizes with added Vitamin B3, B6 and B12, he added.

100PLUS, the nation’s No.1 isotonic beverage, recently announced that it had renewed its partnership with SCKLM and had struck a four-year deal with the organisers. 100PLUS last sponsored the SCKLM in 2016.

In addition to the drink stations, 100PLUS is lining up some interesting activities to inject unique experiences for everyone at the event. Among others, there will be cheerleading teams positioned at strategic locations along the route to encourage runners to give their best. There will also be an activation booth at the finish line to help engage the runners and fans alike.

The partnership with SCKLM sees 100PLUS maintain its position as a strong supporter of leading sports events in the country, which includes the recent AFF Suzuki Cup, Malaysian Football League and the Malaysian Open badminton events.