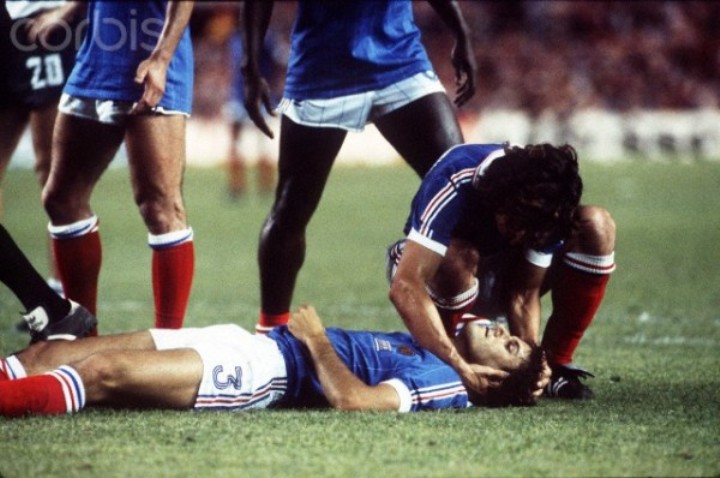 It was the match that had everything – spectacular goals, a brutal clash and a dramatic comeback, before finally, a nail-biting penalty shoot-out.

For many, West Germany’s 1982 World Cup semi-final against France in Seville remains the ultimate, an engrossing duel providing new plot twists at every turn.

And as the two countries prepare to meet again in the Euro 2016 semi-final in Marseille on Thursday, the 1982 match has also become a symbol of the tense football relationship between France and Germany.

“It is a scar that will remain forever,” said Alain Giresse, a French midfield lynchpin at the time.

French football legend Michel Platini treasures the encounter as one of the finest moments of his career.

“For me, no book or film or play could ever recapture the way I felt that day. It was so complete, so strong, so fabulous,” Platini said in an interview several years later.

For all the scintillating attacking play, it was a savage encounter between Germany goalkeeper Harald ‘Toni’ Schumacher and France’s Patrick Battiston in the 57th minute which became the turning point.

With the score at 1-1 after a Pierre Littbarski goal was followed by an equalising penalty from Platini, Battiston was sent clear with only the advancing Schumacher to beat.

The French substitute nudged the ball past the goalkeeper only to be brought crashing to the ground by Schumacher, who knocked Battiston cold and dislodged two teeth.

Actions that should have earned Schumacher a red card, as well as a penalty to France, went unpunished. Incredibly, the Dutch referee later said he had not seen the incident.

France had to replace Battiston with another substitute, which would prove important when the match went to extra time.

Fuelled by a sense of injustice as well as the burning desire to secure a place in the final against Italy, France played fabulously for the remainder of the match.

Yet they were unable to break down a typically resilient German side, who went close to winning the game with two late efforts, only to be denied by France’s keeper Jean-Luc Ettori.

Early in extra time it looked as if Germany had finally cracked. An unmarked Tresor fired France ahead with a wonderful volley, hooking in a free-kick from Giresse.

Moments later the diminutive Giresse put France 3-1 ahead, his powerful long distance shot beat Schumacher and flew in off the post. But just as France were contemplating a place in the final, Germany hit back.

They reduced the deficit through Karl-Heinz Rummenigge, introduced as a substitute though not fully fit. Two minutes from time the Germans pulled level, Klaus Fischer scoring with an overhead kick from close range.

For the first time in the history of the World Cup, penalties would be used to settle a match.

France converted their three opening spot-kicks and looked to have gained the advantage when Uli Stielike saw Germany’s third saved by Ettori.

With a chance to make it 4-2 to France though, Didier Six’s effort was saved by Schumacher. Littbarksi, Platini and Rummenigge all scored with their next penalties before Maxime Bossis stepped up only to see Schumacher save.

Horst Hrubesch, who earlier in the tournament had attacked German coach Jupp Derwall as a coward for leaving him out of the side, sent Germany into the final by nervelessly converting his penalty.

France, one of the most gifted sides in the tournament, were out. Platini described the result as scandalous. In an interview nearly 20 years later Platini was more generous.

“In the heat of the action, I felt a profound sense of injustice after Schumacher’s foul, but now I remember that match as one of the most thrilling moments of my life,” Platini said. “Incredible.” – Agence France-Presse