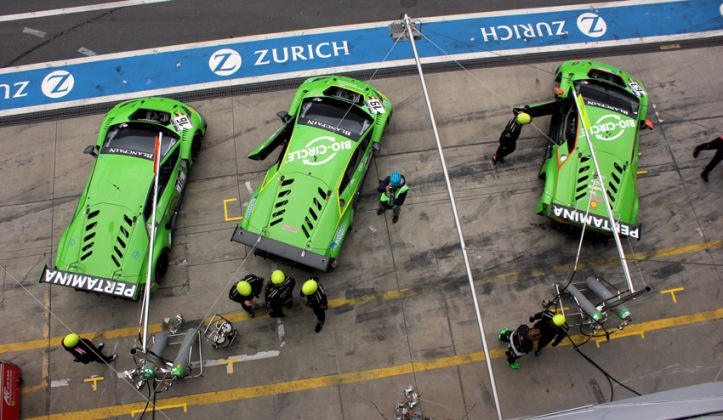 A Silver Cup win by Luca Stolz and Michele Beretta but also a few slight disappointments and a fair share of bad luck again – that´s the resume of the Nürburgring weekend in Blancpain GT Sprint Series for Grasser Racing Team.

„It was not the best weekend for us”, Beretta stated. “During free practice we had a few problems with the car and did not run as much as we maybe would have wanted. Looking at these troubles, qualifying in relation was not too bad. In the first race we were able to overtake a few cars, putting us in a slightly better position for the main race”, was the Italian´s comment.

“In the end we won twice in the Silver Cup category, which was very important as we are the class leaders there. These wins are the minimum goal, but of course we also aim for finishing Top Ten ore even Top Five in the general classification and not only ending up in P13”. Teammate Luca Stolz was adamant that “Lamborghini here was lacking a bit of pace here in general, in comparison to the Audi for example. Once we were also given a drive-trough penalty, as I was accused of having cut the chicane, but then it tuned out that it had not been the case, so the penalty was cancelled, which was a fair decision”.

Race control had been victim of a momentarily mix-up –  it had been Stefan Rosina in the other green Lamborghini Hurracán GT3 number who was forced to go over the chicane during a hard fight with one of his competitors”. Actually the whole race for me was a hard fight, I was on the limit each and every corner of each lap, and so it happened, sorry for that”. Teammate Davide Valsecchi, the former GP2-Champion of 2012, who this time stood in for Jeroen Bleekemolen, was rather disappointed, “because we really deserved to get into the points but unfortunately we got this drive through penalty because of the situation with Stefan. We were actually fast enough, but we have to avoid this kind of mistakes. I felt very comfortable in the team, I like my teammates a lot, so it´s a pity that no more than P24 came out of it this time”.

Bad luck seemed to follow Nicolas Pohler and Mirko Bortolotti in car number 63: “We were really fast in free practice, once fourth and then even fastest in the second session”, said Pohler, “and P8 in qualifying was also still okay”. But then the qualifying race quickly came to an end for Mirko Bortolotti: “I had a very good start, was immediately able to pass René Rast, but then I was taken out already in the first corner by an Audi, which was the end for us. So our weekend was already severely compromised as we had to start the main race on Sunday from the very back”, the Italian explained.

“Actually we had quite a good pace, we were the fastest Lambo in the field, and the teams did a very good job again. But of course being so far behind is a very difficult position and then Niki whom I share the car with immediately got involved into a crash again which led to an early retirement. So we really did not drive very much”.

Team principal Gottfried Grasser had to admit: „It was a difficult weekend. In the beginning we thought to be quite competitive, but to be first in a free practice does not mean too much, as quite a lot of people don´t really go for it there. Qualifying was more or less okay, but we were not really happy. It looks like we are not completely up to speed at the moment, which was shown clearly by Luca and Michele. They had a trouble free race and still only something like 12th, 13th position was possible. We have to analyse now what´s the reason behind it. But there is at least something positive: With car number 16 we had a very good pitstop, most likely the fastest of the whole weekend at all. That´s one of these little things you can take out of such a weekend”.

There will be no break for the team now, says Grasser, “as we are already on Tuesday an Spa for the ever so important test day for the 24-hour-race end of July. And as a preparation for this highlight we will also take part in a race of the British GT Championship at Spa next weekend with two cars. It is quite convenient as the rules there are absolutely the same as in the Blancpain Series.”

The driver line-up for the three GRT cars at the classical 24 hours is mostly fixed by now: Two cars will be driven by the regular Blancpain Endurance drivers, the third one will be run in the ProAm-Class, where at least the Silver drivers are already known with Nicolas Pohler and  Diego Alessi.