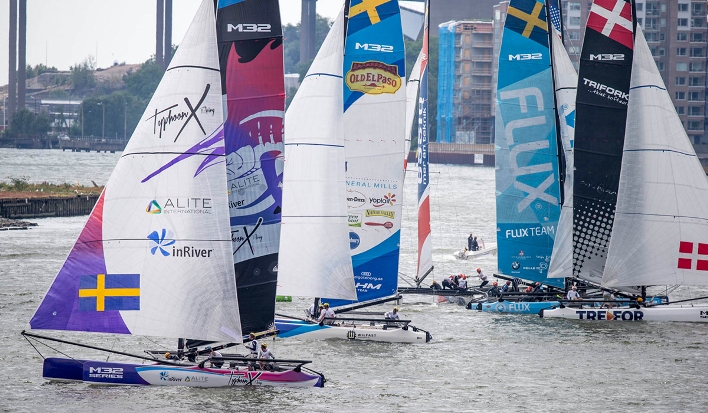 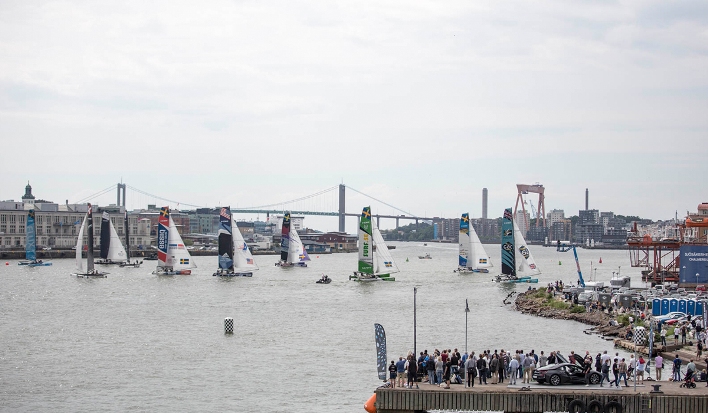 Taylor Canfield and his team Us One showed why they are the current leaders of the M32 Series Scandinavia with four top three results today in Gothenburg. The Swedish home teams had a good day and the young skipper Måns Holmberg took his first win in the series.

The wind picked up today on the tight race course in Gothenburg. The shifty conditions on the river made the starts crucial and mistakes where punished hard. Taylor Canfield led the two first races comfortably from start to finish. US One’s recovery in the third race was the most impressing feature of the day. Starting in the back of the fleet, and with a penalty, team Us One managed to come back and squeeze ahead of most of the fleet to secure another top three result.

?“Everyone enjoyed the racing today and especially us. There were a lot of lead changes and near collisions. I put us in some tight spots but the boys in the team made it possible to come back and we are happy to top the scoreboard heading in to the final day tomorrow”, says Taylor Canfield. ??The home town skipper Nicklas Dackhammar was the runner up behind Canfield in race two.

His fellow Swede got great speed in the third race, extended his lead round the track. Still, Mattias Rahm is the best Swede on the scoreboard with the most consistent performance so far. ?

The last race was a tough battle between Canfield, GAC Pindar and Rahm Racing. After the last rounding, Ian Williams and GAC Pindar overtook their competitors and won their first race in the event.

“We were happy to have a good position at the last rounding after a bad start where almost everyone were in front of us. It was tight and we put a penalty on Taylor so we were able to squeeze past him”, says Ian Williams. ?

M32 Series Scandinavia Gothenburg continues with the final day tomorrow, Saturday, at 2 pm. The official prize giving will be taking place in the Race Village at 5.30 pm.