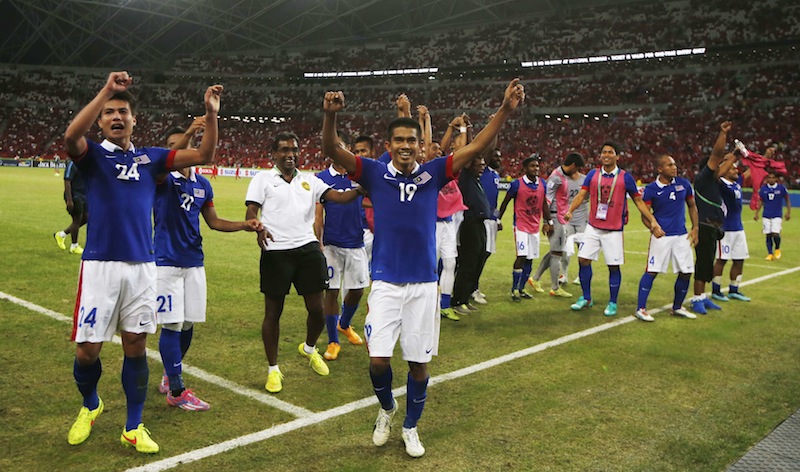 Safiq Rahim, skipper of the 2010 AFF Suzuki Cup winning  team, scored a penalty three minutes into injury time to lead Malaysia into the last four of the regional tournament.
With the game tied at 1-1, Malaysia were awarded a penalty which Safiq converted. The Lions, including their keeper pushed up in search of the equaliser but off a quick-counter-attack, Indra Putra Mahayuddin raced down the right and shot into an open goal to put the final score at 3-1.
Malaysia had earlier scored the opening goal in the 61st minute through Safee Sali but Muhammad Khairul Amri Mohammad Kamal levelled it in the 83rd minute.
With Thailand defeating Myanmar 2-0, with goals from Tanaboon Kesarat (12th) and Prakit Deeprom (84th) at Jalan Besar Stadium, Singapore only needed a draw to advance. But that was not to be today as Malaysia managed to hit the mark twice in injury time.
As the runners-up of Group B, Malaysia will now face Vietnam, the Group A champs, in the home-and-away semifinals on Dec 7 and 13. Vietnam will play away first. Thailand, the Group B champs, will face the Philippines on Dec 6 and 12.
The atmosphere was electrifying as the two teams trooped onto the pitch. When the Malaysian anthem was played, the Singapore fans showed their support and clapped along. It was indeed a moment of true sportsmanship, well done to the Singapore fans.
Once the game got underway, it was every team for themselves. Within minutes, Fazrul Nawaz Shahul Hameed blasted his shot across the Malaysia goal.
A few minutes on, Amri Yahyah saw his shot sail over the the bar, he would repeat that shot in the dying minutes.
Safiq stepped up and controlled the traffic in the middle. He tried to launch attacks from all angles but the Lions stood firm, thanks mainly to the hardworking Hariss Harun and skipper Mohammad Shahril Ishak.
As the game pogressed, Gary Steven, just back from suspension, picked up yet another booking for his tackle on Hariss.
With three mminutes to go, Azammuddin Mohd Akil’s cross to the centre was pushed out into the path of Safee Sali whose shot came off the right post and the score remained at 0-0 at the break.
The pace picked up after the break as both teams went on the hunt. Khairul Amri and Fazrul Nawaz, supported by Hariss, tried to find their way through the defence.
But just past the hour mark, Safee, who had been trying to regain his form, sent the fans into celebration when he latched on to an Amri pass and rammed his shot in.
In the 83rd minute, Singapore’s persistence paid off handsomely. An infringement by Mohammad Muslim Ahmad outside the box resulted in a freekick. Muhammad Safuwan Baharudin’s strike came off Khairul Fahmi. Khairul Amri  coolly stabbed in the rebound.
Malaysia then went on to score twice in injury time to seal the win and their place in the semis.