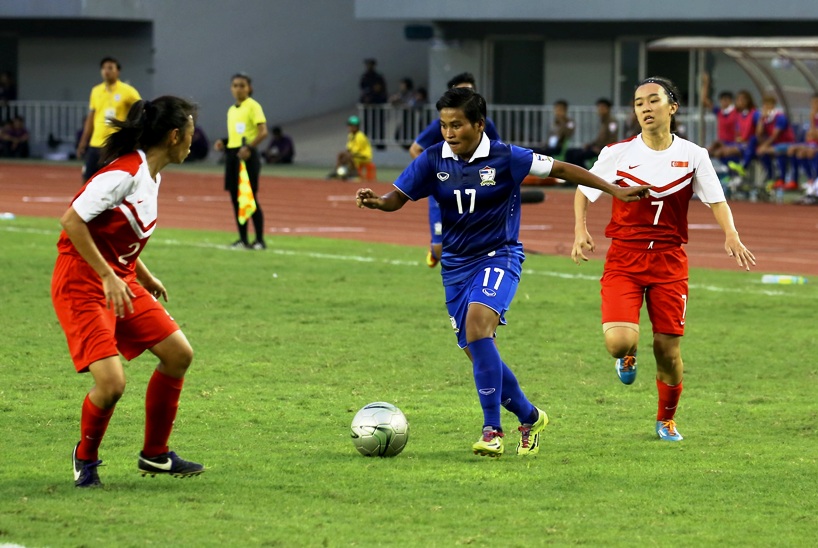 Defending champs Thailand and Vietnam both won their matches today to book their places in the AFF Myanmar Women’s Championship semifinals with one game to spare.

The two teams won their respective matches today against Singapore (8-0) and Philippines (4-0) and have six points apiece.

Thailand and Vietnam have unassailable leads but must face each other in their last preliminary tie on Saturday to determine the group winner.

Singapore and Philippines, who lost both group matches, will face off to decide the last two spots in the group.

The Thais and Vietnamese are likely to face either hosts Myanmar or Australia Under-20, from Group B, in the semi-finals next Tuesday.

Thailand took time to get their engine warmed up, then in the 27th minute skipper Annotsara Maijarern unleased a wicked freekick from at least 25-metres out which the Singapore keeper could not handle.

Anootsara would later complete a hattrick with two more goals in the second half.

The Thais were unable to make it through due to the tremendous efforts of the Singapore defence including the goalkeeper Noor Kusumawati Mohamed Rosman.

In the first match of the day, the Philippines surprised their opponents and restricted them to a 4-0 win. Vietnam, which had whipped Singapore 14-0 the previous day, were expected to land a bigger haul today.

Instead, their efforts resulted in only four goals and that was due to the hard work of the Philippines players.

The Philippines worked their opponents hard and kept them in check for virtually the entire first half. The defence were especially on their toes and put the brakes on the speedy Vietnam strikers, except for the seventh minute when their opponents managed to sneak one in.

The goal happened before the Filipinas had dug themselves in.

Vietnam skipper, Nguyen Thi Minh Nguyet, charged down the right and sent her cross which Nguyen Thi Hoa easily turned in for the opening goal of the game. But that was all the Philippines would concede in the first half.

The Philippines suffered a blow when Shelby Serhee Salvacion picked up an injury after being tackled and was replaced with Krystal Victoria Requejo de Ramos.

After the break, the Vietnamese took advantage of their tiring opponents and bagged three goals, two of them were from Nguyen Thi Tuyet Dung. Thi Minh Nguyet headed home the fourth to cap a solid win for Vietnam.