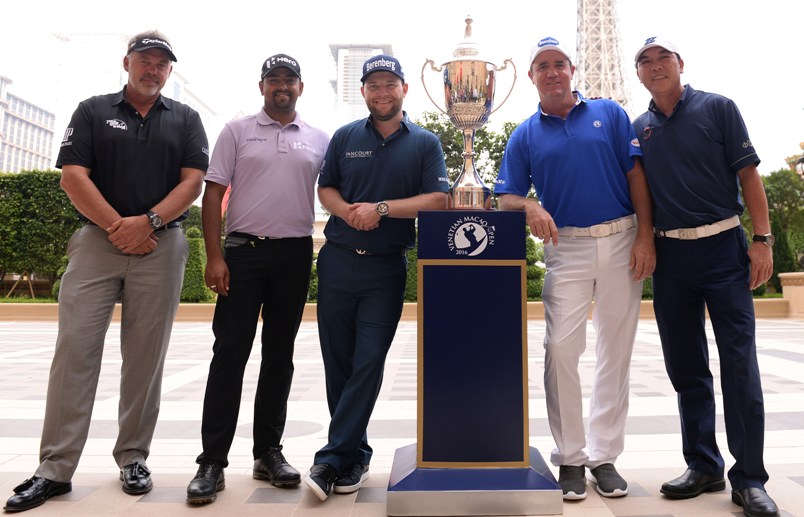 South African star Branden Grace plans to live up to his top billing by winning the US$1.1 million Venetian Macao Open starting on Thursday to ensure he closes out another amazing season.

The world number 14, who has triumphed twice this year and posted six other top-10s around the world, is the highest ranked golfer in the field which includes title holder Scott Hend, reigning Asian Tour number one Anirban Lahiri and Europe’s Ryder Cup captain Darren Clarke and vice captain Ian Poulter, who is making a return from injury.

Upon his arrival today, the 28-year-old Grace declared: “I’m very excited to be here. This is my first time to Macao and I’m sure this week will be fun on and off the golf course. I’ve been to Vegas but it’s nice to see a place like this outside the States where you won’t expect this being a small island. It’s phenomenal. I’ve not gotten lost in a hotel before and I got lost for 15 minutes coming from the hotel lobby!”

Grace is hoping to achieve what fellow countryman Ernie Els failed to do, which is to win the Venetian Macao Open. “Ernie has been here many times and he says it’s a fantastic place and the tournament is the way it should be run. Being top-15 in the world, I hope it would be an advantage. Hopefully I’ll be there or there abouts at the end of the week.”

The South African star successfully retained his Qatar Masters title at the start of the year and then claimed a breakthrough victory in the United States in April. He also enjoyed top-five finishes at the U.S. Open and PGA Championship, which reinforced his growing reputation as a future Major winner.

“I’ve ticked off so many of my goals. I’m trying to sneak into the world’s top-10 and stay there which has been a big goal all year. It’s been a great season, which I’ve been consistent to be in the top-15. I want to take it week by week, try to win this week and carry on and take the momentum for the weeks coming up,” said Grace, who won the China Open in 2012.

After spending the past two years as captain of the European Ryder Cup team, veteran Clarke is keen to get back into individual mode again. “I couldn’t think of a better place to do that than starting here in Macao. It’s almost like a fresh start for me again in terms of playing and I’m excited to be back,” said the former British Open winner, who featured in the Macao Open back in 1999.

“I played nine holes this morning with Ian Poulter and the trees are now a lot bigger than they were the last time I was here. We used to take some short cuts but I don’t think we can do that now. My priorities in the past two years have been towards the Ryder Cup. Obviously, that’s now finished and from my own perspective and from the European perspective, we had a disappointing result. I couldn’t have done any more than I tried to do. Now I’ve got to get back to the day job and try to hit a golf ball and hit it straight.”

Lahiri, winner of the Venetian Macao Open in 2014 and runner-up in 2013 and last year, is looking to triumph again at one of his favourite hunting grounds on the Asian Tour.

“The golf course is a big challenge. I had some tough years here in my rookie years and I’ve learned to play the golf course. I think I kind of changed my game to adapt to it,” said Lahiri, who is 47-under-par here in the past three seasons.

“I do enjoy it now and I think we’ve had a lot of healthy competition over the years and to see the Venetian Macao Open grow into such a major event, it’s been fantastic. This (course) has got the charm of an old school club and challenges you to hit shots especially when the wind is up. I love the challenge and that is what inspires me to play well here.”

Two-time Macao Open winner Zhang Lian-wei, who has only missed the event once since its inauguration in 1998, will be amongst a host of top Chinese players including Liang Wen-chong, the Asian Tour number one in 2007, and youngster Dou Ze-cheng challenging for honours.

“I grew up with this tournament. From the very beginning, the tournament was small but it’s now come to a time where you get a lot of star players playing in it. The growth of Macao and mainland China is very fast. A big thanks to Venetian Macao for helping with the growth of the event,” said the Chinese veteran.

No fewer than 43 Tour winners, seven players from the current top-10 and five Order of Merit champions are in the field this week.