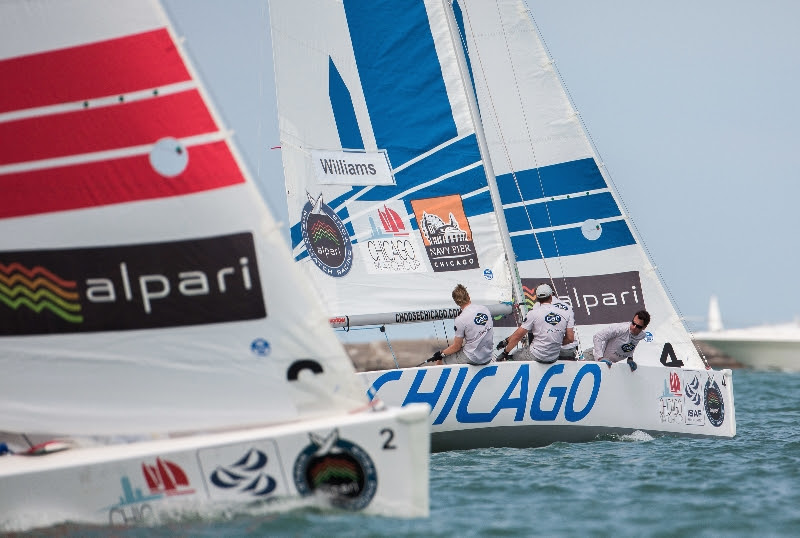 The world’s top match racing sailors are preparing to gather again for Stage 4 of the Alpari World Match Tour from Wednesday 17th September through Sunday 21st at the Chicago Match Cup, the only US stop on the World Championship Tour.

Six of the twelve teams that will sail in Chicago have Tour Cards, and as regulars on the Alpari Tour, they are also competing for a share of the US$500,00 Tour bonus fund throughout the seven-event series. The other six teams competing have earned entry to the Chicago Match Cup by winning Tour Qualifier events or were selected as Wildcards. This year’s line-up includes eight of the top ten skippers in the ISAF Match Racing World Rankings and Wildcard entry Tom Slingsby, an Olympic Gold Medalist and strategist for the successful defense of the 34th America’s Cup- Oracle Team USA.

One of the Chicago favorites among the Tour regulars is the reigning World Champion and 2013 Chicago Match Cup winner, Taylor Canfield and his Team US One. Canfield, who is originally from the US Virgin Islands, sails with Rod Dawson (NZL), Hayden Goodrick (NZL) and Mike Rehe (USA) – the same team he won this event with last year. Although Canfield currently lies in third place on the 2014 Tour Leaderboard, his several years of experience and hundreds of hours in Chicago’s TOM 28 class boats will likely give him an edge over his fellow competitors. Just a few weeks ago Canfield and team US One returned to Chicago and demonstrated their prowess on their home turf by winning the CMRC’s Grade 2 Chicago Grand Slam with an impressive 19-3 winning record.

A strong rival to Canfield and keen to keep his current position as World No. 1 is four-time Alpari World Match Racing Tour champion, Ian Williams and his GAC Pindar team from Great Britain. Williams won the inaugural edition of the Chicago Match Cup on the Tour in 2012, and came in fourth in last year’s edition won by Canfield. But on a string of impressive 1-2-1 finishes in the last three AWMRT events, Team GAC Pindar has strong momentum to do well again in Chicago.

Second to Williams on the Tour leaderboard but making his competitive debut in Chicago is France’s Mathieu Richard and his LunaJets team. Richard’s strong 3-5-2 scoreline from the last three AMWRT events, the fact that he won two AMWRT events last year after a two-year hiatus, and that he was runner-up to Williams as overall Tour Champion in 2007 and 2010 indicate that Richard and the LunaJets are a strong team with tremendous potential to win.

Only one point behind Richard at fourth on the leaderboard is Sweden’s Bjorn Hansen and his Hansen Sailing Team. His best result thus far in the 2014 AWMRT was a triumphant win at home in Stena Match Cup Sweden, but past wins at other events and two consecutive third-place finishes in the last two Chicago Match Cups point towards his potential to win this month in Chicago as well.

Another Tour Card holder that has done well in Chicago is Australia’s Keith Swinton and his Team Alpari FX. Swinton’s Chicago Match Cup experience goes back to 2011 when it was an ISAF Grade 1 event, not yet on the Tour. Swinton won the Chicago Match Cup in 2011, but fell back to a 9th place result in 2012, only to roar back to finish as runner-up to Canfield last year. Swinton will thus also be dangerous in Chicago.

The final Tour Card holder is Phil Robertson and his WAKA Racing team from New Zealand, who finished third overall on the AWMRT both last year and in 2012, and has finished 4-9-4 in three Tour events this year.

Like Swinton, Robertson won a Chicago Match Cup before the event joined the World Match Racing Tour. In 2009, the early years of Chicago Match Race Center, WAKA Racing won the Grade 2, and has since finished 3-6-6 in the following three years. Robertson will be hungry to return to the podium in the more competitive event this year.

The remaining teams in the field won invitations at Tour Qualifying events, have been selected as Wildcard entries by the CMRC, or have been invited to replace Tour Card holders who are unable to attend.

ISAF 16th-ranked Chris Steele and his 36 Below team from New Zealand won the Chicago Match Cup Qualifier at CMRC in June.

The first of two slots made available by withdrawn Tour Card holders is filled by Pierre-Antoine Morvan and his Vannes Agglo Sailing Team from France.

The second Tour Card replacement slot is being filled by a young team from Denmark, Joachim Aschenbrenner and his Team Trifork, who made their AWMRT debut this year with a 7th place performance at Stena Match Cup Sweden. Joachim is the youngest skipper in the field, but only by a year to Chris Steele.

The remaining two skippers were selected as Wildcard entries, which are highly sought after invitations for feature skippers. The first Wildcard was awarded to CMRC co-founder, who at 18th in the world is the highest ISAF-ranked US match racer: Don Wilson and his CMRC Racing Team.
The final Wildcard entry, Tom Slingsby from Australia, has a Gold Medal in the Laser Class from the 2012 Olympic Games, was the Strategist on Oracle Team USA for their successful defense of the 2013 America’s Cup, and currently serves as the Oracle’s sailing team director.

Slingsby may be the least experienced match racer in the field, but with five fleet race World Championship titles in the Laser and Etchells classes, and an Olympic Gold Medal to his name, he should be a formidable threat to the match racing veterans.

“Match racing is an extremely important skill to have in the AC arena,” said Slingsby. “I was fortunate to be able to join OTUSA and be given a shot because everyone was learning together how to match race a multihull. I have a lot of experience match racing in fleet racing situations but I’m really keen to improve my match racing at this event. I’ve got a great team with me, but I’m definitely going to be the weak link out there with no match racing experience. We will get beaten up here I think, but for me that’s often the best way to fast track your improvement.”

While this is the third consecutive AWMRT Chicago Match Cup to be hosted by the Chicago Match Race Center, it will be the first time the event will be hosted out of Belmont Harbor, just a few miles north of the city center. Courses will be set on Lake Michigan just north of the entrance to the harbor and within view of spectators lining the shoreline of Lakeview and Lincoln Park.