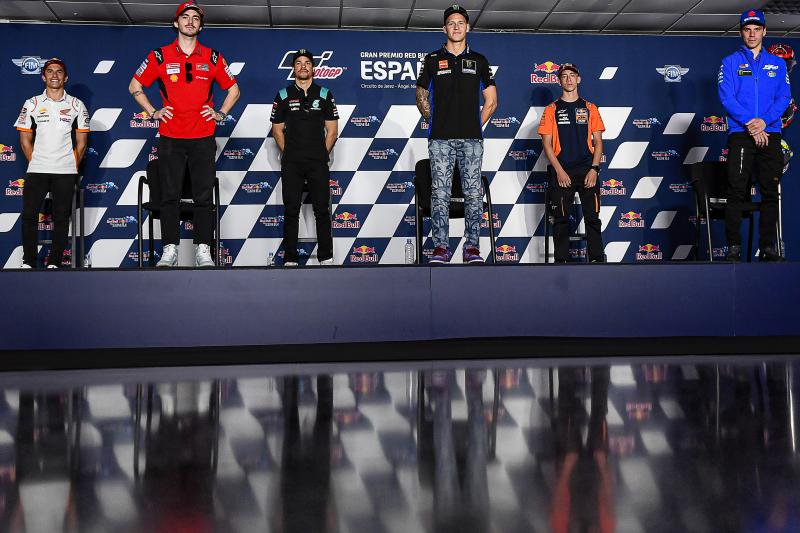 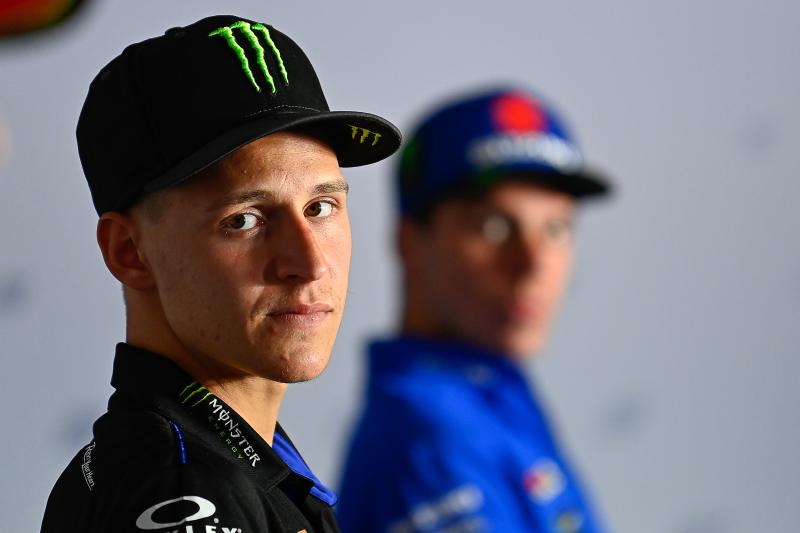 It has played host to many a MotoGP™ moment down the years, but the drama that unfolded under the Andalucian sun in 2020 was some of the finest Jerez has ever seen. A season-ending injury for the, at that time, World Champion Marc Marquez (Repsol Honda Team), the first taste of MotoGP™ glory for Fabio Quartararo (Monster Energy Yamaha MotoGP) and the, soon to be, World Champion Joan Mir (Team Suzuki Ecstar) becoming the first faller of the season.

But, according to the leading protagonists, that has all been assigned to the history books. Nothing can be taken for granted in MotoGP™ was the key takeaway from Thursday’s Press Conference, as the Red Bull Grand Prix of Spain officially got underway. Five MotoGP™ stars and the headline-grabbing rookie Pedro Acosta (Red Bull KTM Ajo) took centre stage with the World Championship leader Quartararo starting proceedings.

The Frenchman arrives at the scene of his back-to-back victories last year having just secured another brace of victories, however, El Diablo won’t be letting his 2020 successes affect his focus this year: “I’m feeling pretty excited. First of all, because I love this track but also because I’m feeling great on the bike and great with the team. I’m just thinking about, you know, working the same way as we did in Qatar and not thinking that last year I won both races here because we saw Miguel win in Portimao last year and then have some struggles this year, so I just want to focus in working in the same way and be ready for Sunday. It means nothing that we won both races last year.”

A lot of things have changed in the space of twelve months for the 22-year-old. But he says the biggest difference is his change in mindset thanks to his turbulent season last year: “I feel like 2020 helped me a lot because a lot of things happened. In 2019, everything was perfect and I enjoyed it a lot with seven podiums and six pole positions. 2020 was more up and down though. We started well but then we had some engine problems, some electronic problems and I lost my mind a little bit. Then we got it back but the end of the season was a total disaster and I feel like I’ve learned a lot. 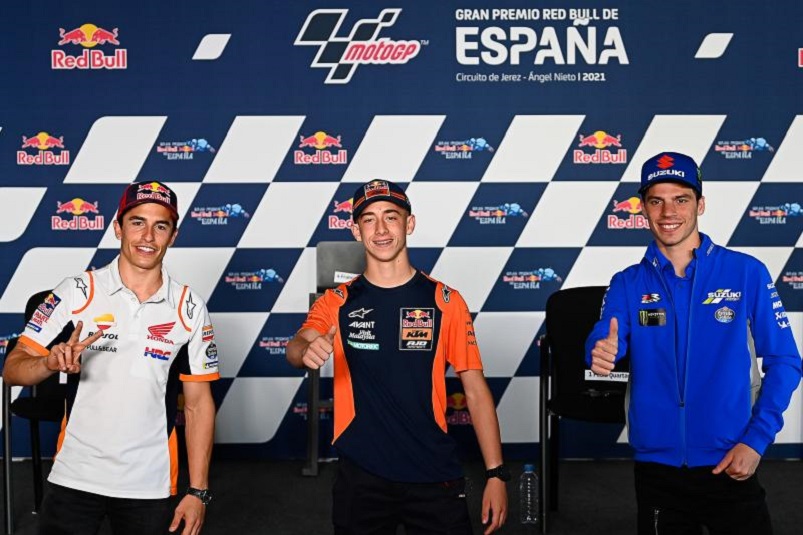 “Staying calm is the most important for me because when I get a little bit angry on the bike, my comments to the team are not clear. Being much calmer on the bike is working much better for me and the results at the first races show that, so I want to keep working like this. I know it’s not easy but I’m feeling great and I feel like we are going in the right direction so I’m happy.”

One end of the spectrum to the other, next was Marc Marquez. Turn 3’s highside during last year’s Spanish Grand Prix very nearly ended his career. Nine months of hardship followed but now he’s back. And he’s back to right the wrongs of 2020. But, in typical Marquez style, he’s playing down expectations before anyone starts tipping him for what would be on eof the great MotoGP™ victories at the scene of his horror crash 285 days ago.

“Portimao was a special weekend but here I feel like everything is a bit quieter,” began the eight-time World Champion. “This is important, it feels like a normal weekend. It’s not like my physical condition are completely different, they are very similar, but I hope to ride in a better way from FP1 and my target is to hopefully be more stable with my physical condition during all the weekend. I have good and bad memories here, of course, but better memories than worse memories, so this will be important. There’s no target, no clear target, just ride the bike, have more kilometers, try to feel better the position of the bike. We know where our limit is now and it’s not with the bike or the tyres, it’s more about me. We know where the limit is and we know where we need to improve but we need time, days and kilometres on the bike.”

World Champion Mir was one of many to struggle in the heat of the Andalucian summer last year but, a drop of almost twenty degrees, he believes will play into his hands: “Last year was a difficult start to the season here. It’s true that the heat of last year made it pretty difficult for everyone and it looks like this year it will be colder. This is something that can be good for us. Everyone knows this track really well and it’s always really difficult to make a difference but well we will try to do our best with the package that we have. Our goal is to finish on the podium, to fight for the podium and then we will see. It’s true that last year here was not really good but also Portimão was not too good and I was able to make a good result, so I will try to do my best.”

It’s not only Mir and Marquez who are looking to shake off the demons of 2020, with Francesco Bagnaia (Lenovo Ducati Team) more than ready to put behind him the horrors of last year. With only a handful of laps remaining, the Italian was robbed of a debut premier class podium after an engine issue and he admits he’ll be using that as added motivation this weekend. He sits second in the Championship having taken two podiums so far, a feat that has earned him a lot of new fans including former MotoGP™ star Ben Spies. The American has been singing the praises of Bagnaia on social media, much to his delight.

“I’ve seen the tweet from Ben,” started the factory Ducati man. “It’s always nice to see past riders say something about us and I really appreciate it. Already last year I started to try to ride the Ducati in a different way, and I understand better now how to do it. Last year in the second part of the season I was struggling a lot and it was difficult to accept it and understand what was happening. But then in pre-season testing, I started to have the same feeling again and maybe all the work we’ve done this winter with training and in the gym with the others from the Academy has given me extra motivation and confidence.

“In the first race in Qatar, I was trying to manage the tyres but I learned from that race I had to use the tyre in a different way. In the second race, I was faster than the first but made mistakes and lost the opportunity to win. In Portimão I was very confident with the bike and felt great on everything, we know our potential is great in acceleration and braking and I tried to concentrate more on that area, and the bike, if you push, is turning well. It’s strange but something that with our bike is working well.” 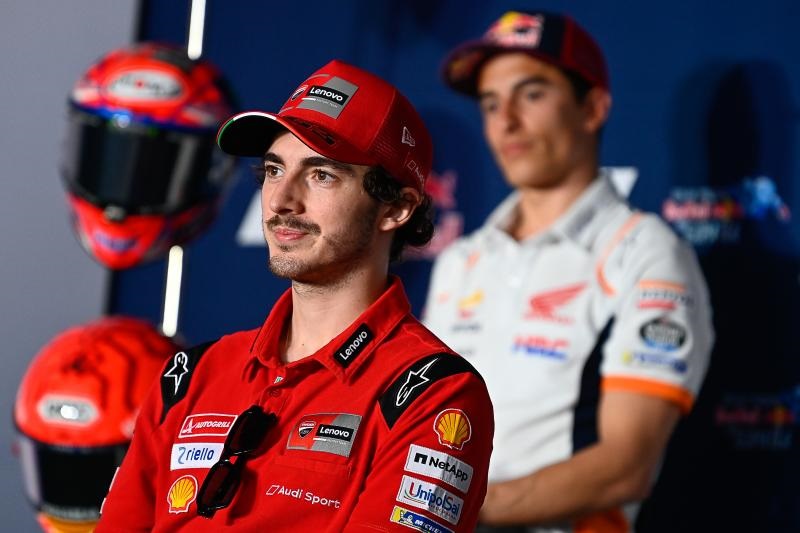 Just like Quartararo, Petronas Yamaha SRT’s Franco Morbidelli has had to overcome some difficult moments not only throughout his career but in 2020 too. A glimmer of hope appeared in Portimao and the Italian is ready to use that result as a springboard for the remainder of the season. He then went on to explain whether he believes his mental, more philosophical approach key to overcoming tougher times. “It’s the story of my life trying to overcome difficult times. It’s happened in the past and it will happen in the future, and I hope to be hard enough and ready enough to overcome the difficult moments I will face.”

Finally, it was a debut appearance in the pre-event Press Conference for 16-year-old wonderkid Pedro Acosta. The Spaniard made Grand Prix history in Portugal by becoming the youngest rider ever to clinch three podiums in his first three races and was rightly given a place on the top table with the premier class gladiators as a result. After receiving advice he will cherish forever from heroes Marquez and Mir, and also joking about the size of his sphincter due to his nerves ahead of the Press Conference, he revealed the secret to his Grand Prix success.

“I feel incredible,” said Acosta. “After a good preseason, we knew we could do good results but nothing like this finally when you come to the world championship, you don’t think about winning races in the first part of the year or something like this. We have to keep working. A few minutes ago I was nervous, but if I am here it’s because we’re working well.”

Now all attention will switch to the action on track as the Red Bull Grand Prix of Spain roars into life on Friday morning. After 2020 delivered yet another spellbinding chapter in the venue’s storied history, you don’t want to miss the next one this weekend. – www.motogp.com