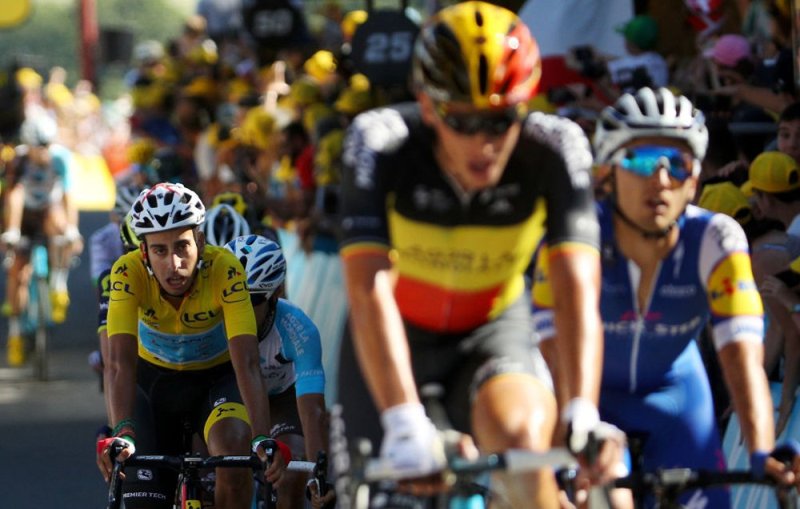 Fabio Aru admitted he had been caught out of position as he lost the Tour de France leader’s yellow jersey to reigning champion Chris Froome on Saturday.

He started the day six seconds ahead of the Briton but now trails the three-time champion by 18sec after coming home 30th overall, 25sec behind stage 14 winner Michael Matthews.

“I was too far back at the start of the (final) climb,” said Aru.

“There was a break in the bunch and I had to put in a huge effort to close the gap, which I then paid for when there was another break.

“That’s what explains the gap (to Froome).

“There’s no point stating that I would have preferred to keep the jersey. An (18)-second gap is not nothing but there will be a very challenging last week.

“Everything is not lost!”

Aru even said he believes Sunday’s 15th stage in the Massif Central, that includes four categorised climbs, will see more time gaps amongst the leaders.

“We didn’t expect to lose the jersey today but we’ve lost it,” he said.

“We’re not going to turn it into a drama. Maybe it’s better because the next stage will be hard to manage.

“We need to remain serene, tomorrow we can stay calm and there’s always the Alps to come.

Aru’s troubles stemmed in part from the weakness of his team, being unable to protect him on Friday or Saturday.

But his Danish team-mate Michael Valgren suggested Aru was to blame for losing time on Saturday.

“I don’t know (what happened). Ask him. I tried to take him to the front, but he didn’t stick on my wheel,” said Valgren, who seemed relieved to have lost the jersey.

Froome too is delighted to have the jersey back so his Sky team-mates can control the stages better than Astana managed on Friday, when attacks came from all angles all day long.

“Yesterday (Friday) the race was in bits with Astana trying to control it,” said Froome.

“They didn’t have the numbers and strength up there and as a consequence the race blew apart.

“I’d like to think when we were controlling the race it was a bit calmer.

“We’ll see tomorrow, it’s the last stage before the rest day. It will be all hands on deck because it will be a war.”

Froome gained time on most of his top 10 rivals, with Romain Bardet and Simon Yates losing 4sec, Nairo Quintana and Alberto Contador giving up 21sec and Aru 24sec.

But Ireland’s Dan Martin and Rigoberto Uran of Colombia finished right behind the Sky leader in eighth and ninth.

Uran remains fourth but now just 29sec off the lead, with Bardet third at 23sec.

Martin, who lost 1:15 last Sunday after Richie Porte took him out in a spectacular crash on a perilous descent, is sixth at 1:26 after making up time on the yellow jersey for the third day in a row.

“It was quite a hard stage with a route that went up and down,” said Uran.

“I saved the day. The last climb was explosive, but I was able to attack it quite well.”

Quintana was simply happy to avoid a crash in the jostling for position at the end.

“I didn’t want to lose anything but it happened. Often it’s better to avoid danger and lose 20 seconds,” said the Colombian, eighth overall at 2:22.

“After yesterday’s efforts, the finale to this stage was very tough, and not suited to me.” – Agence France-Presse