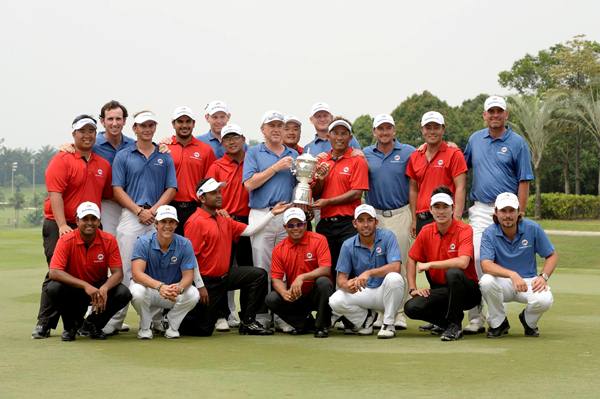 TEAM ASIA pulled off a stirring comeback in the final round of the inaugural EurAsia Cup to snatch a share of the trophy by taking six of 10 singles matches played today.

The spectacular collapse of Team Europe, who entered the final day singles matches 7-3 up, was totally unexpected, despite Asia’s marvellous fightback on the second day after a 5-0 thrashing in the four-balls on Thursday.

The outcome will go some way towards helping raise the profile of a tournament clouded by a war of words between its organisers and those who stage the rival Royal Trophy competition.

None epitomised Asia’s desire more than Thailand’s Prayad Marksaeng who fought back from four down after the first nine to halve with world No. 28 Jamie Donaldson in the fourth match-up of the day at the Glenmarie Golf and Country Club in Kuala Lumpur.

Asian captain Thongchai Jaide attributed the players’ “positive attitudes” as the reason for the improbable comeback.

“We had a team talk the day before and I told them anything is possible in golf. They also believed in themselves even though we were trailing by four points,” said the former Thai paratrooper.

With the European players unable to find their range, Asia drew level at 8.5 after winning five of the opening seven ties and halving one.

Only European captain Miguel Angel Jimenez held his nerve as he edged Malaysian Nicholas Fung at the last hole when the local youngster could only lip out his final putt after splendidly going toe-to-toe with the Spaniard through 17 holes.

That miss would eventually prove the difference, but Nicholas’ performance gave his teammates a big boost.

Asia got their points when Thongchai defeated Major winner Graeme McDowell 3 and 2. Reigning Asian No. 1 Kiradech Aphibarnrat then beat Thomas Bjorn 2 and 1.

Asia went into the lead for the first time in the contest at 9.5-8.5 when Siddikur Rahman outplayed Stephen Gallacher 4 and 3, only for Joost Luiten to edge Koumei Oda on the final hole.

Gonzalo Fernandez-Castano and Hideto Tanihara were left to battle for the trophy and were all square after 14 holes.

The pressure nearly took its toll on Fernandez-Castano on the 15th hole when he missed a two-foot putt to hand the advantage to his 35-year-old opponent.

He redeemed himself on the next hole with an eagle and the two players failed to get the better of each other in the remaining two holes.

“I was shaking at the final hole. It’s totally different when you are playing for a team,” admitted Fernandez-Castano.

“Everything was down to my game and if I could go back, probably to the 15th again, but a half was a fair result.”

Jimenez doffed his hat at Asia’s incredible fightback after “an amazing day of golf.”

“The Asian team played very well. To win six matches and get seven points from 10 showed that golf is very competitive and healthy,” said Jimenez, who may be Europe’s Ryder Cup vice-captain in September, if he fails in his bid to make the team as a player.

The players and officials held a moment of silence for the passengers and crew of missing Malaysia Airlines MH370 flight before Prime Minister Najib Razak presented the prizes.

Najib also confirmed Malaysia will host the next two editions of the EurAsia Cup in 2016 and 2018.