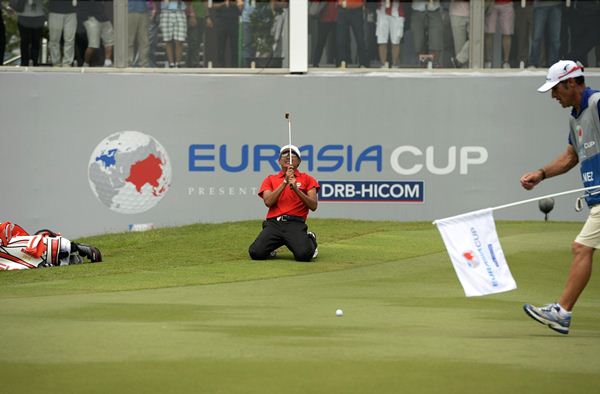 MEMBERS of Team Asia hailed the contribution of Nicholas Fung of Malaysia who held his head up high at the inaugural EurAsia Cup presented by DRB-HICOM which concluded in an enthralling draw with Team Europe today.

Nicholas, the reigning Asian Development Tour Order of Merit winner, fought tooth-and-nail with in-form European captain Miguel Angel Jimenez in the first singles and was denied a halve when the veteran Spaniard brilliantly birdied the 18th hole from about eight feet for a 1-Hole win at the Glenmarie Golf and Country Club.

Heading off in the first singles match, Nicholas battled back from being 1-down on three occasions before agonisingly missing his birdie putt on the last which would have halved the match.

“This is possibly the best week of my golfing career. It was a great tournament and I had the chance to play with the top players from Asia and Europe,” said Nicholas, who played against Graeme McDowell and Jamie Donaldson in the Fourball and Foursomes format.

“I need to learn to be more patient because Jimenez played without any pressure. He was so patient. I need to improve my game for the future to prove that I deserve to be in Team Asia,” added the 23-year-old.

Jimenez praised Nicholas, who surprised many with his gutsy display.

“In my match with Nicholas, I made a birdie and he made a birdie on the next. It was a very nice match.  So he played very well.  At the end of the match, he’s coming up to the 18th, and a chance to make another birdie but he missed it and I made my birdie so I won,” the Spaniard explained.