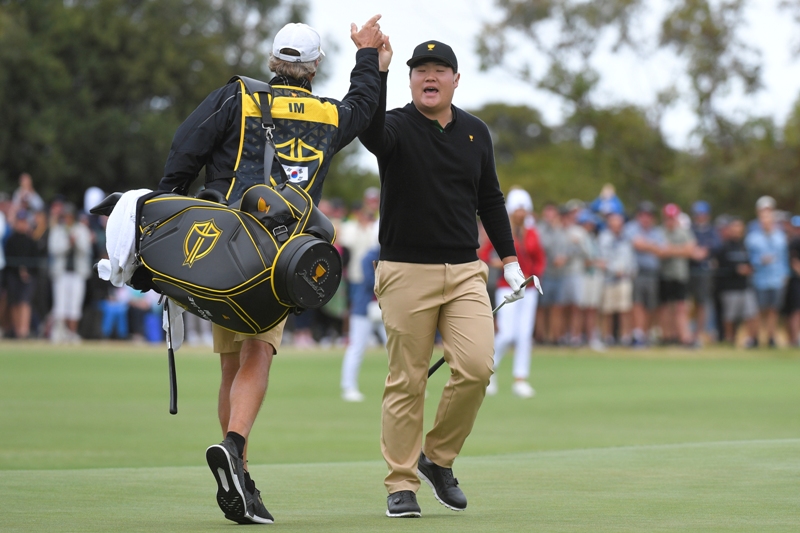 Korea’s Im produced a glorious chip-in eagle on the opening hole as he and Canadian partner Adam Hadwin edged Xander Schauffele and Patrick Cantlay 1-up in the second match of the Four-Ball session.

An, a late call-up to replace an injured Jason Day, teamed up with home hero Adam Scott to defeat Bryson DeChambeau and Tony Finau 2 and 1 in a match they never trailed while Pan and Japanese star Hideki Matsuyama earned the fourth and final point for Ernie Els’ team with a thrilling 1-up victory over Patrick Reed and Webb Simpson.

Louis Oosthuizen and Abraham Ancer, one of seven debutants in the team, were the other pair who delivered a point for the International Team while U.S. Team playing captain Tiger Woods and Justin Thomas won the first point of the session with a 4 and 3 win over Marc Leishman and Joaquin Niemann.

South African legend Els has imparted his knowledge of Royal Melbourne where he holds the course record of 60 to his players and the 21-year-old Im, the 2019 PGA TOUR Rookie of the Year, credited his captain for his flying start.

“Surprisingly I wasn’t too nervous. I was going to hit a 3-iron off the tee but Ernie came up and advised me to hit a driver since the pin was to the left and obviously it worked out really well. I’m really happy about my results and I’m excited for tomorrow,” said Im, who will partner Cameron Smith in the last Foursomes match on Friday against Gary Woodland and Rickie Fowler.

“I feel like our teamwork was great. When I wasn’t playing well, Adam (Hadwin) would cover for me and vice versa. I think our teamwork really helped make our match great.”

An was delighted to start his first Presidents Cup on a winning note alongside Scott, who now holds the most appearances in the event with nine for the International Team. “It was crazy. I was a little bit nervous. It was fun playing in front of a home crowd, and then playing with Adam calmed me down a lot, and that’s why I was able to hit some great shots in the first couple of holes,” said the Korean.

Pan, the first player from Chinese Taipei to feature for the International Team, was the last pairing out on course as he and Matsuyama fought tooth-and-nail with Reed, nicknamed Captain America for his performances in team events, and Simpson.

The 28-year-old said a special video viewing on Wednesday night during a team function which showcased the International Team’s victory in 1998 rallied him and his teammates.

“The video, even after last night, I watched it a couple of times because I loved it. It’s been 21 long years, and I know it’s day one, but we still have a lot of work to do. That video definitely pumped and excited everyone on the International Team,” said Pan, who won the RBC Heritage in April.

“It’s incredible, especially the last match to finish on 18, as well. The crowd are absolutely amazing and the people, the feeling, it’s making me like speechless. Yeah, I played great. We’re very happy to earn this point.”

Pan paid tribute to Captain Els’ leadership. “It’s great. He has a system going in. We are his soldiers, so we follow his instruction, and that’s what we did today, and it worked great. He’s done so much preparations the last few months. It’s working.”

With their matched tied through 16 holes, Matsuyama drained a 28-foot birdie on 17 to regain a 1-up lead and burst into a fist-pump celebration which ignited one of the loudest cheers of the day.

“Hideki, he’s such a clutch putter. I was close but he made that tough putt, so that was such a crucial putt,” said Pan.