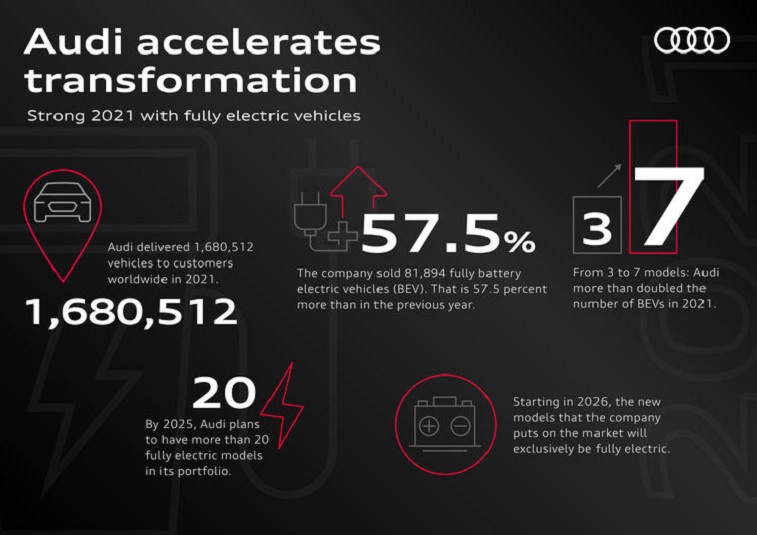 Despite a worldwide semiconductor shortage, total volume of the Audi brand approached the previous year’s level with 1.68 million vehicles, grew in the US and other key markets

Hildegard Wortmann, Member of the Board of Management for Sales and Marketing: “High demand for electric vehicles is rewarding our courage to make lasting changes”

Despite the worldwide semiconductor shortage, Audi is still setting a fast pace on its path to the sustainable premium mobility of the future. That is evident in fully electric car deliveries in the past year, which increased by 57.5 percent over the previous year. Additionally, Audi more than doubled its product portfolio of fully electric models in the past year.

Despite the difficult supply situation, in total, Audi-brand deliveries approached the previous year’s volume: in 2021, the company with the four rings delivered 1,680,512 models to customers, 0.7 percent fewer than in 2020. In the US, the previous year’s performance was exceeded by 5 percent.

“The year 2021 was challenging, but with our worldwide team’s engaged effort, we very successfully overcame them,” says Hildegard Wortmann, Member of the Board of Management for Sales and Marketing at AUDI AG.

“We’re looking to the future with confidence. With ‘Vorsprung 2030,’ we have defined a clear strategy – our courage to make lasting changes is being rewarded: high demand for electric vehicles from Audi confirms our early decision in favor of zero-emission drive systems. We are taking this momentum with us into 2022 and systematically pressing ahead with our transformation. The large number of incoming orders also shows that we have the right portfolio.”

After the first half of 2021, Audi was on track to break records: the 981,681 delivered vehicles were a new best in company history. Then the persistent semiconductor shortage took effect in the second half of the yearAs a result, deliveries dropped In the fourth quarter by 34.2 percent over the same period in the previous year.

Audi set a strong example with the presentation of the Audi e-tron GT1 and the Audi RS e-tron GT2 at the start of the year. In particular, the Audi Q4 e-tron and the Audi Q4 Sportback e-tron also play a central role in the electrification strategy of the company with the four rings. With these four new models, Audi has more than doubled its product portfolio of fully electric models in the past year.

The company’s clear commitment to electric mobility is also apparent in its capital expenditure planning: based on plans approved at the end of 2021, Audi will spend about €18 billion on electrification and hybridization between 2022 and 2026. With total investments of around €37 billion, that means that almost half will go toward these two forward-looking fields.

Alongside the fully electric models within the overall range of models, the Audi Q3 (+19.2 percent), Audi A5 (+8.3 percent), and Audi A7 (+9.2 percent) in particular saw large increases. The SUV segment was highly sought after: the Audi Q5 (+5.3 percent) and the Audi Q7 (+5.3 percent) also gained. The high performance models from Audi Sport once again exceeded the previous year and set a new record with 39,356 vehicles sold (+34.2 percent)

In China, Audi ended 2021 with 701,289 vehicles delivered and a decline of 3.6 percent. After a record-breaking 2020, the fourth quarter was particularly marked by the semiconductor shortage for locally produced vehicles. Imported Audi models (+53 percent) recorded a significant increase in demand. The Audi A5 (+96.7 percent), Audi Q7 (+74.4 percent), and the fully electric Audi e-tron (+68.7 percent) showed particularly positive development. Additionally, sales of Audi Sport models more than doubled (+113.4 percent) over 2020, the previous year.

In the US, Audi actually exceeded the previous year: 196,038 vehicles meant an increase of 5.0 percent. Audi recorded a record year for fully electric cars here: with an increase of 52.5 percent over the previous year, Audi sold more fully electric models in the US than ever before, including the Audi e-tron GT1, which has been on the market since July 2021. The Audi e-tron also increased significantly with +34.6 percent. The SUV segment had persistently high demand, with the Audi Q3 (+26.5 percent) and the Audi Q5 (+19.6 percent) at the top. With 7,796 delivered models and growth of 60.5 percent, Audi Sport models also set a new record in the US. In Canada, the number of delivered vehicles increased by 11.2 percent.

In Europe, AUDI AG approximated the previous year’s level with 617,048 delivered vehicles (-0.4 percent). The Audi A3 (+3.6 percent), Audi Q3 (+5.6 percent), Audi Q5 (+18.6 percent), and Audi Q8 (+1.8 percent) recorded growing demand. The company achieved significant growth in France (+10.2 percent), Italy (+9.9 percent), and the United Kingdom (+9.4 percent), among others. It set new records in Denmark and Norway, partly because of the electric models that were particularly popular there. Overall, 31 European markets were higher than the previous year. In Germany, the brand with the four rings shipped 180,883 vehicles to customers (-15.6 percent). Along with the semiconductor shortage, the effects of the reduction in the value-added tax in the second half of 2020 were also noticeable here. The Audi e-tron continued to show particularly positive growth in the company’s domestic market with an increase of 10.3 percent.

In the other markets worldwide, the company with the four rings increased deliveries by 3.1 percent over the previous year to 137.347 cars. Electric models showed a very positive trend here as well, with an increase of 89.6 percent.

“Although the semiconductor supply will continue to be strained in the coming months, the strong growth in electric model deliveries gives us a tailwind to stick unflinchingly to our roadmap,” says Hildegard Wortmann. “The high volume of incoming orders as well as the highest order backlog ever show that we have the right portfolio.”

Notice: The financial figures for the 2021 business year will be presented at the annual press conference on March 17, 2022.