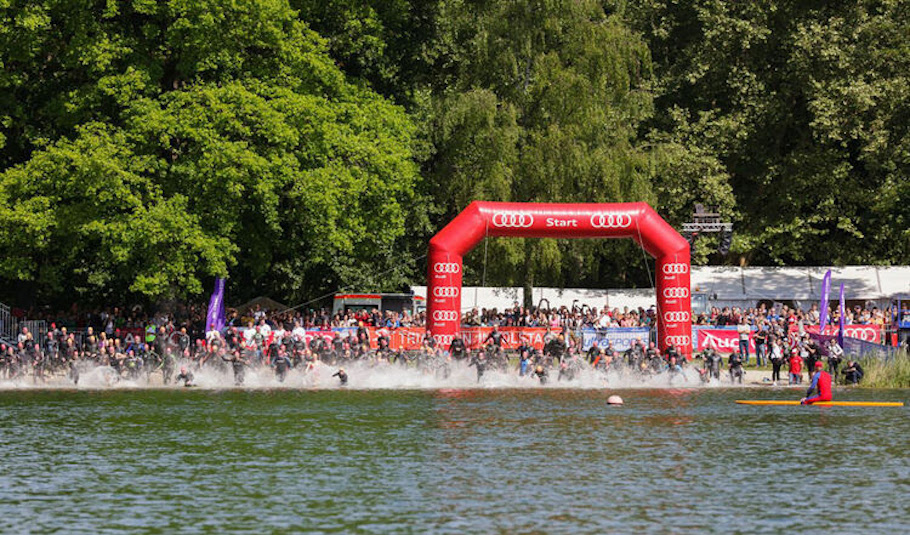 The Ingolstadt event is one of Germany’s top 3 triathlons

The 12th Audi Triathlon Ingolstadt is taking place on 29 May 2022. With 3,000 participants, the competition is now one of Germany’s top three triathlons. Starting this year, Audi will act as the title sponsor and seeks to evolve and reposition the triathlon in Ingolstadt together with other partners and the event organizer.
Well known far beyond the region itself, the sports event is an important building block of the Four Ring’s commitment to corporate citizenship at its Ingolstadt site.
As a good neighbor, Audi promotes highlight sports events at its production sites the world over as part of its commitment to corporate citizenship. One example is the Audi Triathlon Ingolstadt, which will take place on 29 May 2022 and where numerous Audi employees too will again try to break their swimming, biking, and running records.
The event will draw to the starting line some 3,000 athletes – including beginners, ambitious hobby triathletes, and professionals – from all over Germany and beyond. “Sports are to me the best way of competing with oneself and others,” says Markus Duesmann, Chairman of the Board of Management of AUDI AG.
According to Duesmann, the Triathlon Ingolstadt has gained in importance and brings an increasing number of people to the region. “We are excited to strengthen the event by expanding our sponsorship role as the name partner.”
Audi reaffirms its commitment in the region
Audi has a longstanding pledge to support sports in the Ingolstadt region. AUDI AG has been the main sponsor of the Triathlon Ingolstadt since its inception and will now act as the title sponsor starting in 2022.
Member of the Audi Board of Management Sabine Maaßen states: “At Audi, corporate responsibility means standing up for social and environmental causes in equal measure. That’s why we assume responsibility not only for the people who work in our locations or buy our products, but also promote social activities – especially at our locations. We are committed to diversity and networking, in education and culture through to elite and mass sports in the region.”
FC Ingolstadt 04 and ERC Ingolstadt, both also longstanding partners of Audi, will also send their own teams to compete in the Audi Triathlon, affording participants and spectators alike a special highlight along the course.
Organizers pursue sustainable strategy
Together, event organizers and partners are also pursuing the goal of making the event as CO2 neutral as possible. Among other measures to this end, an Audi e-tron will be used as an emissions-free pace car and the Audi Environmental Foundation, along with the triathlon organizers, will call for a plogging action (a combination of jogging and picking up litter) along the biking/running track.
Other measures in pursuit of sustainability are currently being reviewed and planned together with the event organizer. Event organizer Gerhard Budy says the triathlon will leave “lasting impressions, but no traces”. This is expressed by the event partnership with disposal and recycling specialist company Büchl, which has also resulted in the sports event being named “Audi Triathlon Ingolstadt powered by Büchl”.
Audi is a good neighbor at all its locations
As a good corporate citizen, Audi takes responsibility for all the regions where the brand with the Four Rings is located. Above all, Audi supports regional projects relating to social cohesion, culture, science and the humanities, sports, and public health. The three principles of Engage, Educate, and Empower guides Audi’s social commitments. “Engage” covers donations and social sponsorship.
“Educate” unites the training and education programs that Audi offers or supports among other measures, while “Empower” refers to helping people learn to help themselves.