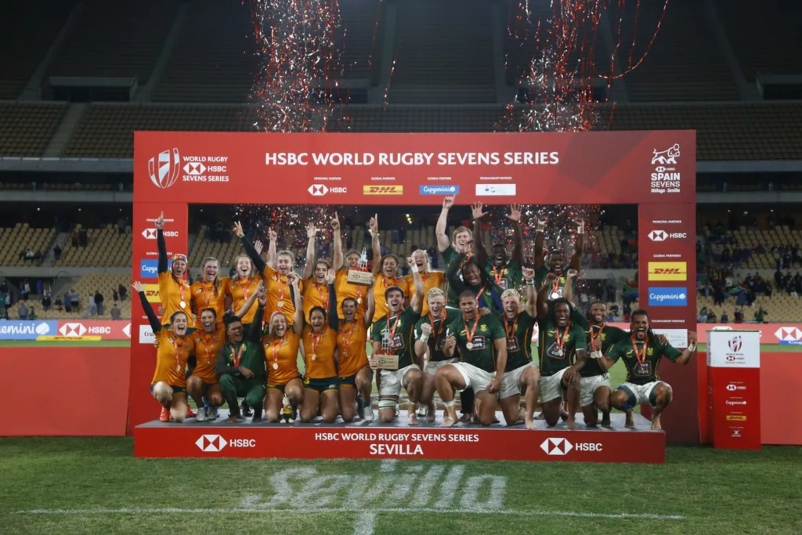 Ireland women dominate England to make history by reaching first ever Cup final, but England bounce back to win bronze for first Series medal since 2019

Next stop for men’s Series is Singapore on 9-10 April, while the women head to Langford, Canada on 30 April to 1 May

South Africa’s men and Australia’s women came out on top once again in the HSBC World Rugby Sevens Series after an enthralling conclusion to the weekend in Seville, Spain.

The Blitzboks beat Australia 33-7 in the men’s final to continue their perfect start to the 2022 Series and rack up a sixth straight Cup victory.

Neil Powell’s side recorded a 34th consecutive win in the final, equaling the second-longest streak of all time, set by New Zealand’s 2001-02 team.

South Africa’s dominance shows no sign of waning, and they were once again untouchable as they added a Seville gold to their haul, after triumphing in Dubai twice and in Málaga last weekend.

Australia were looking for their first Cup final victory over the Blitzboks since Sydney 2018, but faded after a strong start to leave Spain with a silver medal.

“As you can see it’s a little bit emotional. The boys gave a big fight, this is a huge win for our system,” said South Africa captain Impi Visser.

“They are a tough team to play against, credit to them. I think our boys just grafted a bit more and in the end we wanted it a bit more.”

In the women’s tournament Australia won their third gold in four 2022 Series events, but they had to be at their best to come from behind and beat an in-form Ireland side competing in their first ever Cup final.

Australia’s Faith Nathan scored a match-winning try after the buzzer to clinch a comeback victory.

Ireland’s rise to the showcase match, including a semi-final 29-0 thrashing of England, was the story of the weekend in the women’s event, and they put in another superb performance to push the Series leaders all the way.

“It was a great final. We always said Ireland were a fighting team and they certainly did fight to the end, but it was awesome to see our girls out there fighting just as hard to the end with that final try,” HSBC Player of the final Dominique Du Toit said.

Ireland’s Lucy Mulhall said: “It’s amazing, it’s what dreams are made of. We’ve worked really hard as a team, there’s a lot of love, a lot of heart. This is what we wanted to achieve. Ultimately, we want more girls playing sevens in Ireland, so this helps”.

Earlier in the men’s placement matches USA sealed fifth place as a Kevon Williams try after the buzzer clinched a 22-17 win over England, after the two playoff contestants beat France and Scotland respectively in the fifth-place semi-finals.

Kenya and Spain knocked out Germany and Japan to reach the ninth -place playoff, which the Kenyans won 24-19, while Wales defeated Canada 19-14 to take 13th place.

In the women’s competition France finished fifth thanks to a 26-10 playoff win over Russia, but hosts Spain were pipped to seventh by Canada after losing their playoff 21-5.

South Africa’s fourth consecutive victory sees them extend their lead on the 2022 Series leader board with a maximum 88 points. Argentina are in second place on 70 points having demonstrated their consistency by reaching the podium in every round of the Series so far. Beaten finalists Australia are close behind on 66 points.

Australia extended their lead at the top of the women’s Series standings with 76 points, ahead of a chasing pack that sees France in second on 58 points, Russia third with 56 points and last weekend’s winners USA in fourth on 54 points.

Following this thrilling fortnight in Spain, the next stop for the men’s Series is Singapore on 9-10 April, while the women head to Langford, Canada on 30 April to 1 May.

With the highly anticipated return of Olympic Champions Fiji, New Zealand and Samoa, who were missing in Spain, there will be some exciting pool phase action in Singapore.

The pool allocation for the women’s event in Lanford includes Olympic champions New Zealand who will be looking to Challenge Australia’s recent supremacy. – WORLD RUGBY