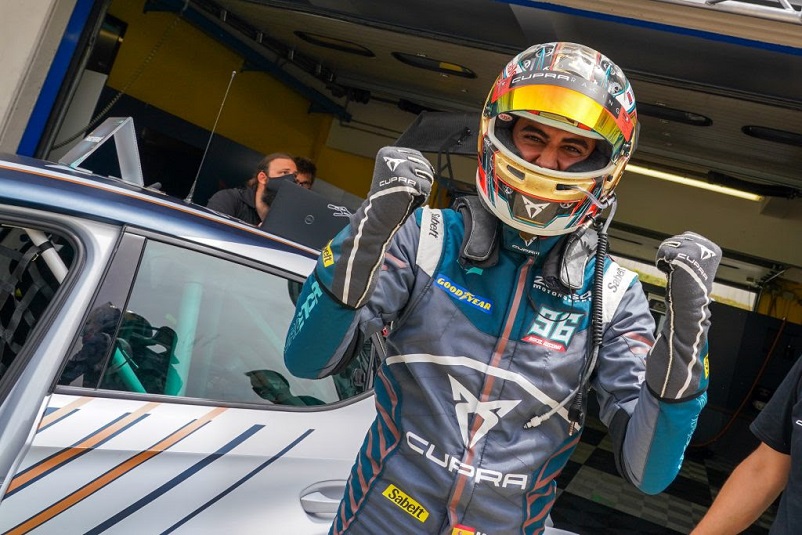 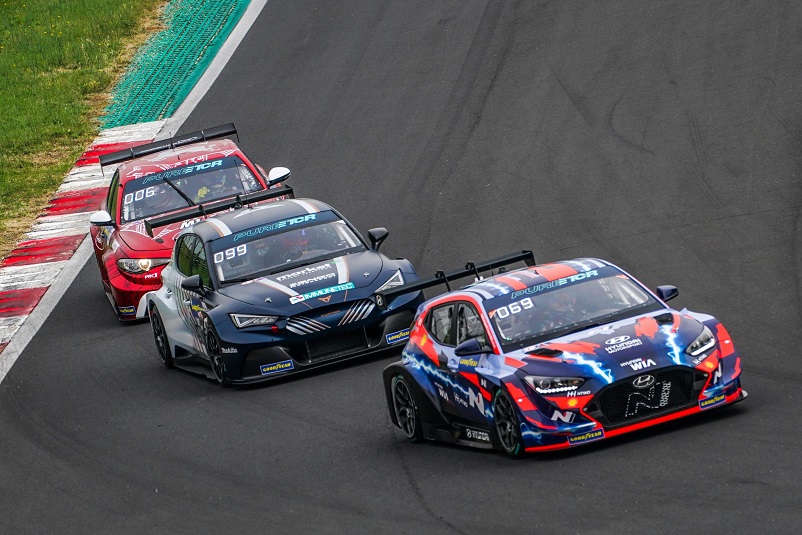 Azcona won both of his Battles in Pool A while Ekström did likewise in Pool B to leave the pair tied at the top of the standings on the maximum 27 points each.

The day also provided Battle victories for rivals Hyundai Motorsport N and Romeo Ferraris – M1RA, who were competing in their home country.

Friday night’s Draw, which PURE ETCR uses to split the 12 drivers into two Pools of six, and then to set the starting order for Round 1, had placed Azcona in Pool A and in an opening Battle against Stefano Coletti of Romeo Ferraris-M1RA and Tom Chilton of Hyundai Motorsport N.

Equipped with 300kW power from his all-electric motor, plus 40 seconds of a 200kW power-up as he lined up under the Starting Gate, Azcona accelerated away well, led into the first corner on Vallelunga’s 1.7km Club Circuit and was never headed.

He was equally dominant in Round 2 – a two-car fight against the Hyundai of Augusto Farfus – who made history earlier in the day by winning the first-ever PURE ETCR Battle – with 450kW available and no Power-Up and ended the day ahead in the standings.

First he beat Jean-Karl Vernay’s Hyundai Veloster N ETCR and Oli Webb’s Giulia ETCR by Romeo Ferraris in Round 1 and then Webb’s team-mate Luca Filippi in Round 2.

That put the Swede at the head of the Pool B standings, ahead of Vernay – who won his Round 2 Battle against Daniel Nagy – and Luca Filippi.

The other Battle winners on the day were Webb, Coletti and CUPRA’s Jordi Gené

Gené – who was the first recipient of the Drivers’ Choice ‘gamechanger’ during the Draw – was spun around by Rodrigo Baptista, for which the Romeo Ferraris – M1RA driver was penalised eight championship points. He made ammends to beat Chilton in Round 2.

Tomorrow the action switches to Vallelunga’s longer 3.2km circuit and begins with Round 3’s Time Trial, which sets the grids for the two DHL SuperFinals; the crucial end-of-day Battles that will determine the King of the Weekend.

Mattias Ekström, Zengo Motorsport X CUPRA, said: “It’s a great day for us. Of course, we need to stay humble, but it’s a good start. We had a good draw last night and when that happens and you start on the inside, you have to execute and win. It gets a lot harder when you’re drawn on the outside. Tomorrow will be a different story because you have to earn your position in the Time Trial; that will be the decider if two drivers finish equal on points as well. I’m pleased with how we’ve started.”

Mikel Azcona, Zengo Motorsport X CUPRA, said: “This is the best poistion to be in, to start with two victories at the very first event. I think the first Battle with [Stefano] Coletti and [Tom] Chilton was a little bit less difficult. I had the pressure from behind starting from the first lap, but I used the Power-Up well early and then I managed the situation with my engineer. In Round 2 the car was a bit more difficult as the tyres got worn, but I could still manage with Farfus. I’m happy to be leading the championship with Mattias, but we have to keep pushing because the season is long and tomorrow is going to more difficult.”