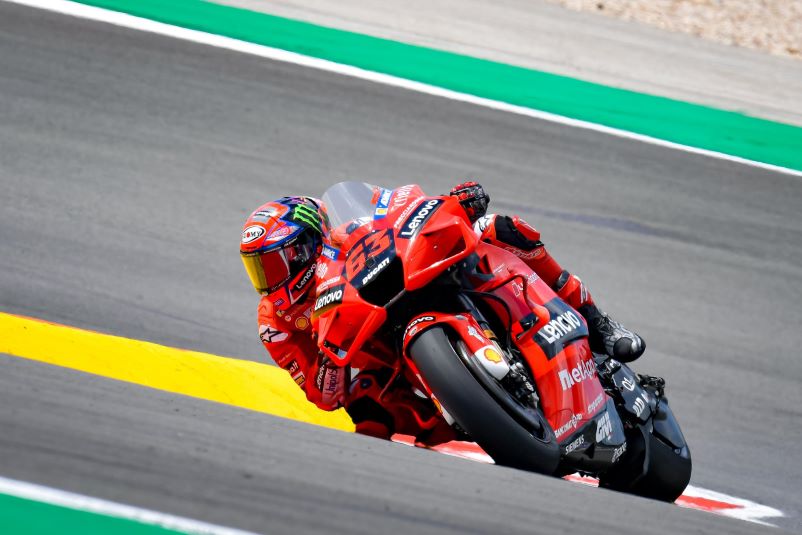 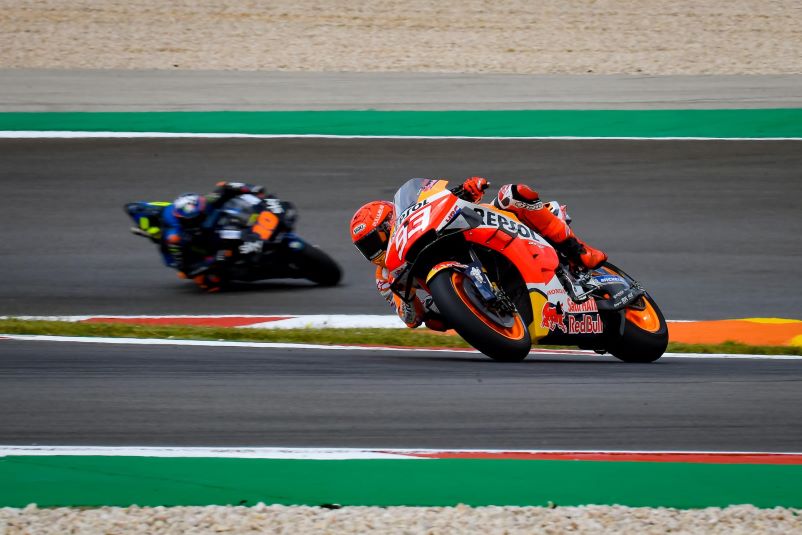 Francesco Bagnaia (Ducati Lenovo Team) is the only rider under the 1:40 bracket on Day 1 of the Grande Prémio 888 de Portugal after setting a 1:39.866 in a fascinating MotoGP™ FP2.

Rain put a halt to proceedings at the end of Moto3™ FP2 but that soon cleared, with the premier class able to head straight out on Michelin slick tyres to get some important dry weather running under their belts. It was a bruising start to the afternoon session for LCR Honda Idemitsu’s Takaaki Nakagami though.

On his first flying lap, the Japanese rider suffered a huge crash heading down the hill into Turn 1, thankfully Nakagami was able to walk away – albeit gingerly. Nakagami went to the medical centre and was declared fit, good news, and he was back out on track later in FP2.

Meanwhile, Quartararo was the early pacesetter as most riders immediately went quicker than they did in FP1, with Team Suzuki Ecstar duo Mir and Alex Rins slotting into P2 and P3 in the early stages. However, the times were continuing to tumble and this dry track time could be crucial for the automatic Q2 places, with dark clouds littered around the Algarve International Circuit.

Mir and then Bagnaia exchanged P1 with 15 minutes gone, the time to beat with 30 minutes to play was a 1:41.052. At this stage, the only two riders who hadn’t beaten their morning times were FP1 pacesetter Maverick Viñales (Monster Energy Yamaha MotoGP) and Nakagami.

A home hero then took his turn to sit top of the table. Miguel Oliveira (Red Bull KTM Factory Racing) went 0.014s clear of Bagnaia with 21 minutes to go, Marc Marquez then snuck ahead of former teammate Alex Marquez (LCR Honda Castrol) to slot into P8 – a provisional automatic Q2 place. The number 93 then jumped up to P3, 0.055s shy of 2020’s Portuguese GP race winner, Rins then went P1 by 0.018s – the top four separated by 0.073s. Not that we needed it, but it was a reminder of just how competitive MotoGP™ is.

Quartararo became the first rider to dip their toe into the 1:40s with 16 minutes to go though, the Frenchman was back at the summit but his margin to Rins was just 0.030s. Aleix Espargaro (Aprilia Racing Team Gresini) then decided to make it five riders within 0.064s, all six manufacturers were now inside the top six – perfect.

Quartararo then extended his lead to 0.068s over Rins before there was a brief moment of silence in Portimao, with the final 12 minutes of Friday’s running coming up potentially pivotal.

Aprilia, thanks to Espargaro, then went P1. A soft-rear tyre was in the back of the Spaniard’s RS-GP, and it set the tone for the upcoming mini qualifying session in FP2. Oliveira placed his KTM at the top and was 0.204 clear of the chasing pack, but reigning World Champion Mir moved the goalposts by a considerable margin. Mir went 0.418s ahead with a 1:40.285, before Jack Miller (Ducati Lenovo Team) closed the gap to 0.051s.

The first 1:39 was then slammed in by Bagnaia, the Italian was now four tenths clear but quick times were coming in all the time. Aleix Espargaro crashed late on at Turn 11, rider ok, as the cameras then panned to Marc Marquez who, after having a couple of hairy moments on his first two attempts, was keeping it pinned on his final flying lap.

The Marc Marquez we’re used to seeing was back, out of shape into the corners, front tyre screaming for mercy, and going very quickly. The Spaniard launched himself to P6, under half a second away from Bagnaia’s pace – fantastic stuff.

No one would end up beating Bagnaia’s lap though, the Ducati man holds a 0.340s advantage into Saturday over Quartararo and Mir. Rins makes it two Suzukis inside the top four, Miller ends Friday in P5 just 0.003s ahead of Marc Marquez. Viñales couldn’t hold his FP1 advantage and finishes P7 in FP2, with World Championship leader Johann Zarco (Pramac Racing) heading Oliveira and a brave Nakagami inside the top 10 – a phenomenal final flying lap for the LCR star.

Catch your breath after that one! Ducati leads Yamaha and Suzuki on Day 1 in Portimao, but there’s faint Jaws music in the background as an eight-time World Champion returns to the fold. Make sure you’re in front of your TVs for MotoGP™ FP3 on Saturday, the weather looks like it will be sunny so we should get a fascinating top 10, automatic Q2 shootout, at 09:55 local time (GMT+1).