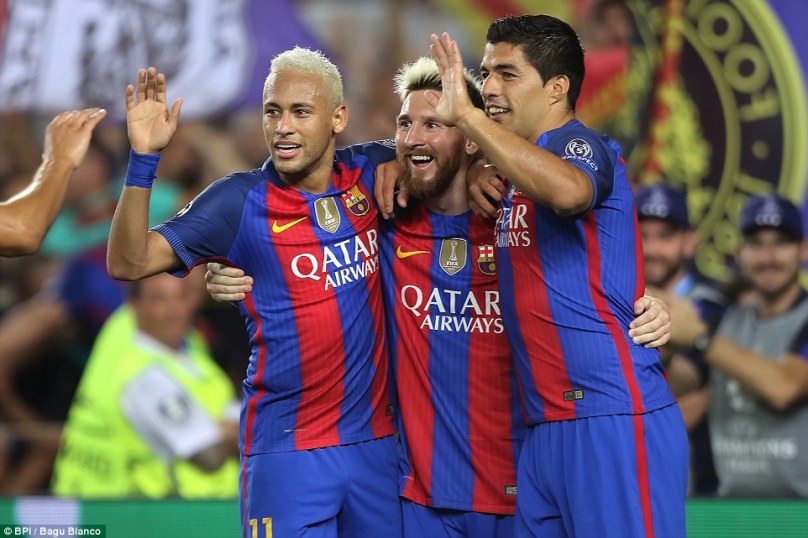 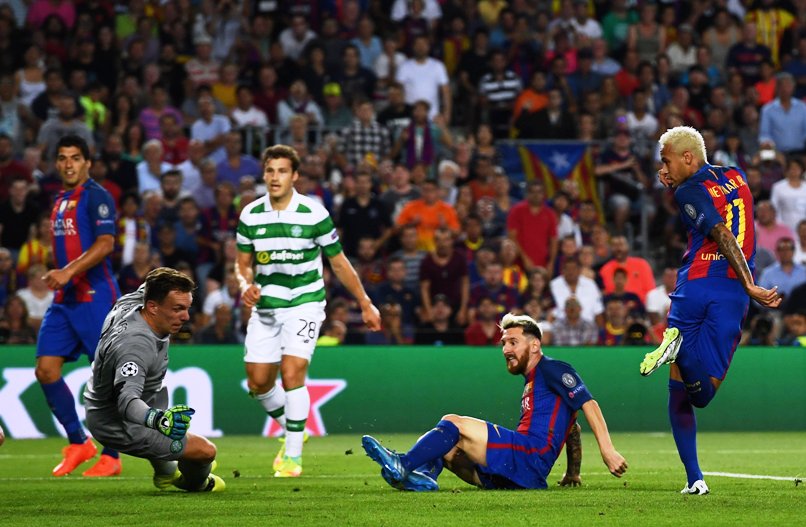 There was no rain but there was a flood of goals at the Camp Nou, where a sparkling Messi hat-trick with four assists and a goal from Neymar, Andres Iniesta and a Suarez brace humiliated Celtic.

“There can be no embarrassment because they do that to better teams than ourselves,” said Celtic boss Brendan Rodgers.

“They are special players. It is a front three that can occupy as many players as you want.”

Suarez, reunited with Messi and Neymar for the first time this season, told TV3: “It has been many games since we have been able to enjoy being on the pitch together and today we did.”

Celtic will have to shrug off this worst ever European defeat as their next Group C outing is at home to City.

After the weekend derby defeat of Manchester United, City had Borussia Moenchengladbach firmly in their sights but the fixture was called off just 20 minutes before kick-off with the Etihad Stadium hit by heavy rain.

The match will now be played on Wednesday at 1845GMT.

The first goal of the 2016/2017 Champions League group stages came after a mere 42 seconds from the head of Paris Saint Germain striker Edinson Cavani at the Parc des Princes against Arsenal.

The strike was PSG’s quickest in the Champions League, but the French champions, and Cavani in particular, were guilty of failing to convert a succession of golden opportunities.

The worst possible start for Arsenal hinted at a potential lopsided affair but the Gunners got out of jail with Alexis Sanchez’s leveller inside the final quarter of an hour.

Both sides ended a man down after Olivier Giroud and Marco Verratti were sent off at the death.

“We have experience in the Champions League, we were resilient, and we got a good point,” said Arsenal manager Arsene Wenger.

“When you start so badly against a team of that quality, if you have no experience, if you are too young, you can be caught.

“But we didn’t panic, overall we were resilient enough and resilience is linked with experience.”

PSG coach Unai Emery added: “I am not happy with the result but I am happy with how we played. This is the way we need to play in future.”

“Ospina was very good and he will have shown tonight for those who doubted him that he is a good goalkeeper,” said the Frenchman.

Arsenal’s night got better with news that Group A’s other game between Basel and Ludogorets also ended 1-1.

But only on goal difference as Atletico Madrid won 1-0 at PSV Eindhoven, Saul Niguez doing the damage with a sizzling scissor-style volley just before the break.

Ancelotti described his debut in Europe with the Bavarian giants as “a great game”.

“Can we win the Champions League? For sure our team will be competitive this season and for the moment everything is good, but the first objective is to win the group, and then we will see the draw.”

Napoli meanwhile may have lost their prolific goal-scoring machine Gonzalo Higuain after the Argentine jumped ship to Serie A rivals Juventus, but his replacement, Arkadiusz Milik, earned them a 2-1 win at Dynamo Kiev.

Denys Garmash put Kiev in front but Milik’s pair of opportunistic headers earned Napoli a key away success against a side that ended with 10-men.

Napoli sit top of Group B after Benfica were undone by one of their own players.

Franco Cervi sent the Portuguese side into an early lead against Besiktas but the Turkish visitors got an injury time equaliser courtesy of Talisca, loaned to Besiktas by Benfica last month.

Barca meanwhile could face fresh sanctions from UEFA after thousands of separatist Catalan flags were again flown at the Camp Nou.

The Spanish champions were fined 150,000 euros ($170,000) by UEFA because of the flags during last season’s competition. – Agence France-Presse