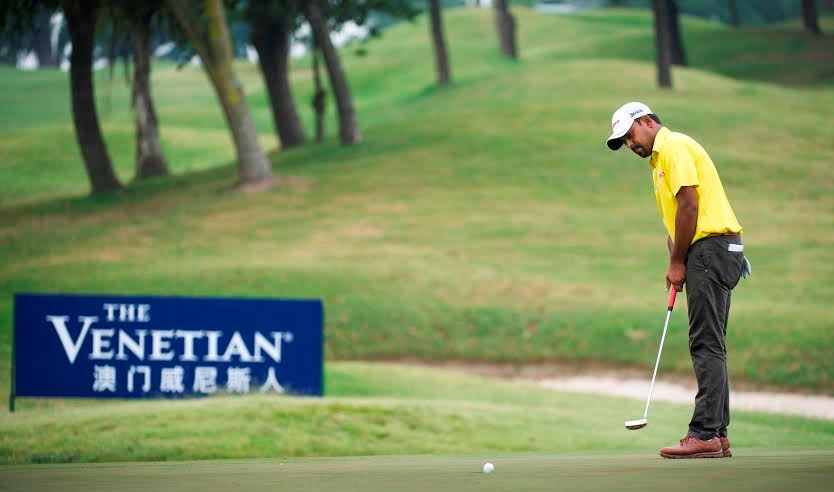 Defending champion Scott Hend of Australia raced two shots clear of India’s Anirban Lahiri after battling to a four-under-par 67 in the third round of the Venetian Macau Open on Saturday.

Despite feeling“flat”, the in-form Hend dug deep into his reserves to produce three birdies over his closing six holes at the Macau Golf and Country Club to give himself a shot at winning a second straight title following his triumph at the Hong Kong Open last week.

Lahiri, who finished runner-up to Hend in Macau last season, carded a solid bogey-free 67 for second place while Thailand’s Prom Meesawat fired the day’s best of 64 to lie three behind the leader in the US$900,000 Asian Tour event.

“It was good, I feel about 65% and I felt average. Hopefully I can come back tomorrow and feel a little more energy and concentrate  better. I’m just feeling flat, extremely flat. I was  waiting for it to come after last week and it’s arrived. Hopefully the storm has past,” said the 41-year-old Aussie, who leads on 14-under-par 199.

The long-hitting Hend, chasing a seventh Asian Tour victory, came out of the blocks in stunning style when he nailed four successive birdies from the second hole which included a chip-in on the fifth. But he stuttered with three bogeys over a five-hole stretch in mid-round before regaining his advantage with birdies on 13, 15 and 18.

“I just lost my concentration. I said to myself I was still in a good position and it didn’t matter if I had finished one or two shots behind. I think I could still come from anywhere to lift the trophy again. We’re in position.

Now, the race begins,” said Hend, who will be hoping to become only the second player after China’s  Zhang Lian-wei to successfully defend the Venetian Macau Open title.

“There’s no pressure. The pressure will be on the guys chasing. I’m the guy who won last week, I’m the one who’s got the title. I’ve been there and done that. It’ll be nice to lift another one but guess what, my name is on that trophy. Who knows … the stars might align and I might get it and I’m going to try my hardest. I’m not going to give up. Whoever wins, we’ll have a duke out.”

Lahiri reaped the rewards of spending extra time at the practice green after Friday’s lackluster 73 as he rolled in birdies on one, six, nine and 17. The 27-year-old Indian, currently second on the Order of Merit, will be hoping to reproduce his opening round’s 61 or last year’s final round of 62 here in Macau to upstage Hend.

“When I left the range this morning, he (Hend) said he wanted to play with me and I’m looking forward to it,” smiled Lahiri, who is chasing his fifth Asian Tour title.

“I I just told myself to come out more positively. Yesterday, I wasn’t in a good frame of mind but I just enjoyed my round today, something Thaworn (Wiratchant) said “I’m an old man and I enjoy my golf”.

“There’s certainly a lot to play for, a lot at stake, a lot of goals and targets. Sometimes, you just have to remember to enjoy yourself which is what I did.”

Burly Prom, who ended an eight-year winless run in Taipei last month, was in sparkling form as he fired seven birdies and kept the bogeys off his card for the second straight day.

“I hit it very good and put myself in with a good chance,” said the Thai.

“Every time I play this course, it’s always tough. You have to be patient and set your mind very strong. When your thinking is good, your mind is good, you can swing the way you want. You’re just focused on the target. That’s all I’m trying to think.”

Thaworn Wiratchant of Thailand (67), winner here in 2009, Chinese Taipei’s Chan Shih-chang (70), and co-overnight leader leader Adam Groom of Australia (72) are tied fourth, five back on 204 while South African star Ernie Els shot a 69 to lie in tied 22nd position on 211.