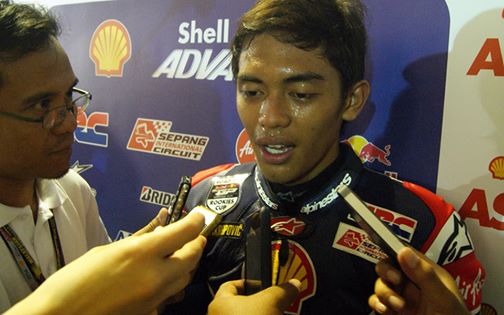 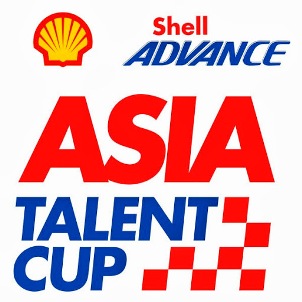 Malaysia’s rising star, Syafiq Rasol came within a whisker of completing back-to-back victories in the Shell Advance Asia Talent Cup here today. After running third for the better part of the 13-lap race today, Syafiq squeezed through at the finish line end up second behind Takuma Kunimine.

His brave efforts today earned the thunderous cheers of the crowd who had supported him throughout the race. There was even more applause for the 18-year-old as he made his way up the podium.

After Syafiq’s superb victory the previous day, the fans were counting on the possibility of a repeat performance from the young Malaysian today. Syafiq’s win yesterday was the first time the Negaraku was played in an international event supporting the Shell Advance Malaysian Motorcycle Grand Prix.

In today’s season-ending Asia Talent Cup race, Syafiq was caught up in a three-way battle with leader Kaito Toba and Takuma. The 18-year-old Malaysian started strong and led the pack for three laps before Toba and Takuma forced their way past. Toba took over the lead and hung on until the ninth lap when Takuma briefly took over for one lap. Toba charged back and regained the lead but only for two more laps before Takuma swept the chequered flag.

“I started well and saw the crash involving Date at Turn 9. I had the lead for a while but was passed by Toba and then Takuma. On the last lap, I tried my best but overshot a turn and Adam (Norrodin) passed me. Then at the last stretch, I just gave it my all and managed to finish second,” explained Syafiq. “Today’s race was harder,there was a lot of overtaking. I was somewhat disappointed that I did not have the same pace as the previous day.”

A major blow in today’s race was Yuta Date who was battling for the championship crown. He started the race with a two-point lead over Toba and was the favourite to win, but as luck would have it, he crashed in the first lap. He rejoined the race but suffered more problems and eventually finished 19th.

There were seven Malaysian riders in the Shell Advance Asia Talent Cup which is being staged for the first time. The others who took part were NazrulBahauddin, Ibrahim Norrodinand HelmiAzman.

Meanwhile in the battle for the championship, Toba emerged the overall winner with a total haul of 155 points from nine rounds. Date was second with 137 while Kunimine was third with 119 points. Syafiq, who has won one round and finished second twice this season, was fourth overall with 102 points.