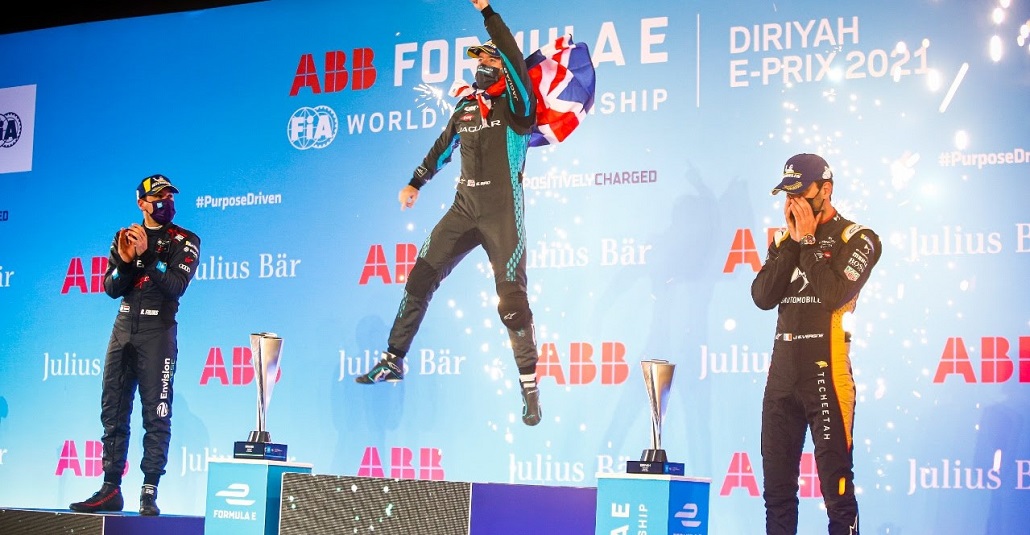 Brit Bird continues record of being the only driver to have won an E-Prix in every season of the ABB FIA Formula E World Championship, racking up his 10th E-Prix victory in the process.
Frijns, who started on Julius Baer Pole Position, engaged in a race-long battle under the floodlights with his former team-mate, finally crossing the line in second.
DS TECHEETAH duo of Jean-Éric Vergne and António Félix da Costa raced side-by-side before a Full Course Yellow came out neutralising the race. JEV initially stood on the podium in third, but a time penalty caused by not using his second Attack Mode activation ended with his team-mate and reigning champion taking his place.
All-electric racing series heads next to the Italian capital of Rome for Round 3 of the 2020/21 ABB FIA Formula E World Championship on April 10.

“I was a bit emotional in the car. It was a big move and a big step for me moving away from what was my family in Envision Virgin Racing to join Jaguar Racing, but they’ve welcomed me with open arms and I’m pleased to deliver this win. The whole point of the opening two rounds was to come here and score decent points and if you’d said I’d come away with 25 points, I’d have taken that. Robin was so respectful and a pleasure to race against which is exactly what you’d expect of his calibre. It was really, really good.”

“I’m really happy today, especially after having such a difficult day yesterday. The team did an amazing job to turn it all around. Hopefully we can keep this form for the rest of the season. We might need to keep working on the race pace as Jean-Eric and Antonio were closing on me towards the end. If we keep having good qualifying sessions, we are going to have a good season.”

“It was a good performance and a good result today, we showed that we have the pace again and I am super pleased with that. It truly was a fun race, with amazing overtakes and a great recovery. This was our last time with the old car, for the next race we will have the new one which is now ready, and I can’t wait to drive it!”