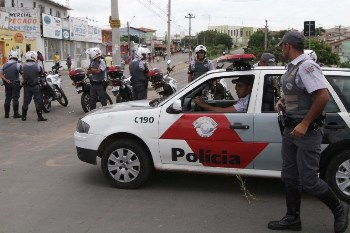 Policemen are deployed at Vida Nova bus station, in Campinas, some 96 km from Sao Paulo, Brazil on January 13, 2013, after people torched buses and attacked cars to protest for the killing overnight of twelve people in a surge of violence that began with the murder of an off-duty policeman. AFP PHOTO / Denny CESARE

RIO’s public prosecutors on Monday said they had charged two suspects with the killing of a TV cameraman in a recent protest at transport fare rises.

The prosecutor’s office demanded the pair, both in their early 20s, be remanded in custody.

Detained last week, the two face up to 30 years in prison if found guilty.

Santiago Andrade, 49, was struck in the head by a flare during the February 6 rally and died of his injuries four days later.

“Fabio and Caio were walking side by side … to where the flare was lit,” the prosecutor’s office said.

“Fabio handed the explosive to Caio and then moved aside to see the result of his criminal action,” the prosecutor’s statement said.

It added: “Caio lit the flare and ran off.”

The prosecutor’s statement said the two then pitched back into the protest fray without a backward glance to see if they might have injured someone.

Their lawyer, Jonas Tadeu, said he would be demanding the pair’s release.

The protest saw around 1,000 Brazilians take to Rio’s streets to protest a fresh round of transport fare rises — the issue which sparked much larger nationwide protests last year.

Many Brazilians are angry about poor public services such as transport, education and health care while their country spends billions on the World Cup and the 2016 Rio Olympics.

Recent protests have been smaller but many have ended in violence after being organized via social media by a hardcore anarchist grouping known as the Black Bloc.

Radical protesters have vowed to disrupt the World Cup, although organizers and world football body FIFA insist they have faith in a tightly integrated security plan.