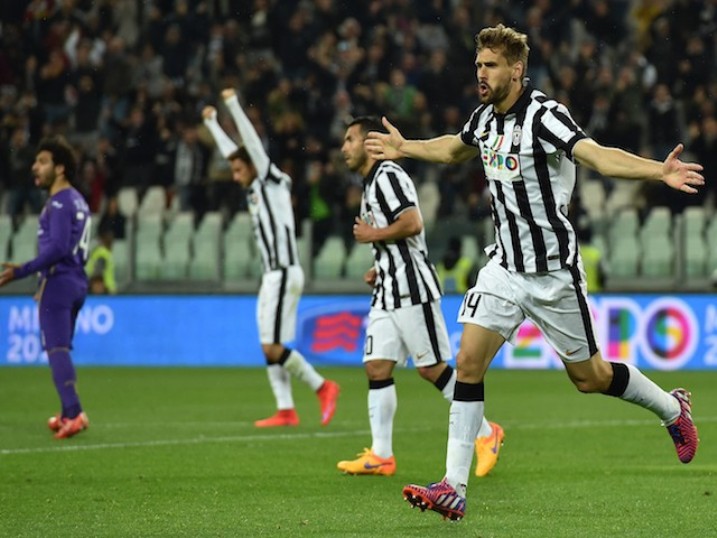 Italy goalkeeper Gianluigi Buffon saved a last-gasp penalty from Nikola Kalinic as leaders Juventus put one hand on a record-equalling fifth consecutive Serie A title with a dramatic 2-1 win over Fiorentina on Sunday.

Juventus will claim a fifth straight title in Italy’s top flight if second-placed Napoli fail to beat Roma at the Stadio Olimpico on Monday.

But judging by the jubilant post-match scenes in Florence, where Allegri was thrown in the air by his players, it is now only a matter of time before Juve are crowned champions for the fifth year running.

Yet it was a rollercoaster game at the Stadio Artemio Franchi, Alvaro Morata scrambling in what turned out to be the winner on 83 minutes just after Kalinic had cancelled out Mario Mandzukic’s 39th-minute opener only two minutes earlier.

Buffon then stopped the Croatian’s spot-kick at the death after he had been hauled down by Juan Cuadrado.

Davide Astori spurned a great chance in injury time, the Italian’s header from a tight angle coming off post and crossbar as Buffon scrambled to get the ball to safety.

Juve’s 27th win in 35 games leaves the Turin giants on 85 points, 12 ahead of Napoli ahead of their visit to the Stadio Olimpico on Monday when 30-goal striker Gonzalo Higuain will make his return from a three-match ban for the visitors.

But he told Sky Sport: “We have to keep the tension high because we also have the Italian Cup final to play (against AC Milan), that’s our second objective this season.

“Winning in Florence wasn’t easy, the lads played very well against a great Fiorentina that was dangerous and would have deserved a draw.”

Fiorentina remain fifth and firmly in contention for a Europa League place, but Paulo Sousa’s men are now in danger of seeing their six-point lead on AC Milan reduced if the Rossoneri beat Carpi on Monday.

Fiorentina had reason to be furious at the half-time interval after a well-worked move that saw Josip Ilicic send Federico Bernardeschi through to beat Buffon on the half hour.

It was ruled offside, although replays suggested the goal was perfectly valid.

“My goal was onside, it’s a real shame,” said Bernardeschi. “But we can be proud of the way we played. We showed Juve what we’re capable of.”

Juventus, too, had seen a goal ruled offside on the quarter hour although on that occasion Sami Khedira was blatantly offside when sent through by Mandzukic.

Khedira made amends on 39 minutes with a great chip that hung in the air for Paul Pogba to nod into the path of Mandzukic for the Croatian to beat Tatarusanu first-time.

Juventus were hitting Fiorentina on the counter for most of the second half as the hosts pressed hard for a leveller, although Pogba was unlucky to miss the target after Mandzukic’s great through ball sent the Frenchman on a long run down the left on 56 minutes.

Fiorentina were showing some great footwork and passing, but failed to breach the Juventus net until much later.

Buffon did well to parry Kalinic’s shot on the hour and minutes later had to look sharp to parry Mauro Zarate’s rasping shot from distance.

Juve looked impenetrable, but a mistake by Leonardo Bonucci saw Zarate steal possession to set up Kalinic for an 81st-minute leveller.

The stadium erupted, but calm was restored minutes later when Morata fired home from close range at a messy corner that caught out the hosts.

Fiorentina should have at least levelled the game but Kalinic’s poor spot-kick was no match for Buffon, who had to block a second time when Bernardeschi tried to sneak the rebound home.

Among earlier games, Sassuolo maintained their surprise bid for a place in the Europa League with a shock 3-1 away win at Torino.

Sampdoria are as good as safe after defeating Lazio 2-1 and Bologna beat Genoa 2-0 to all but end their own relegation fears.

Atalanta defeated Chievo 1-0 while Palermo claimed a crucial three points in their fight for survival as they won 2-0 at fellow strugglers Frosinone. – Agence France-Presse