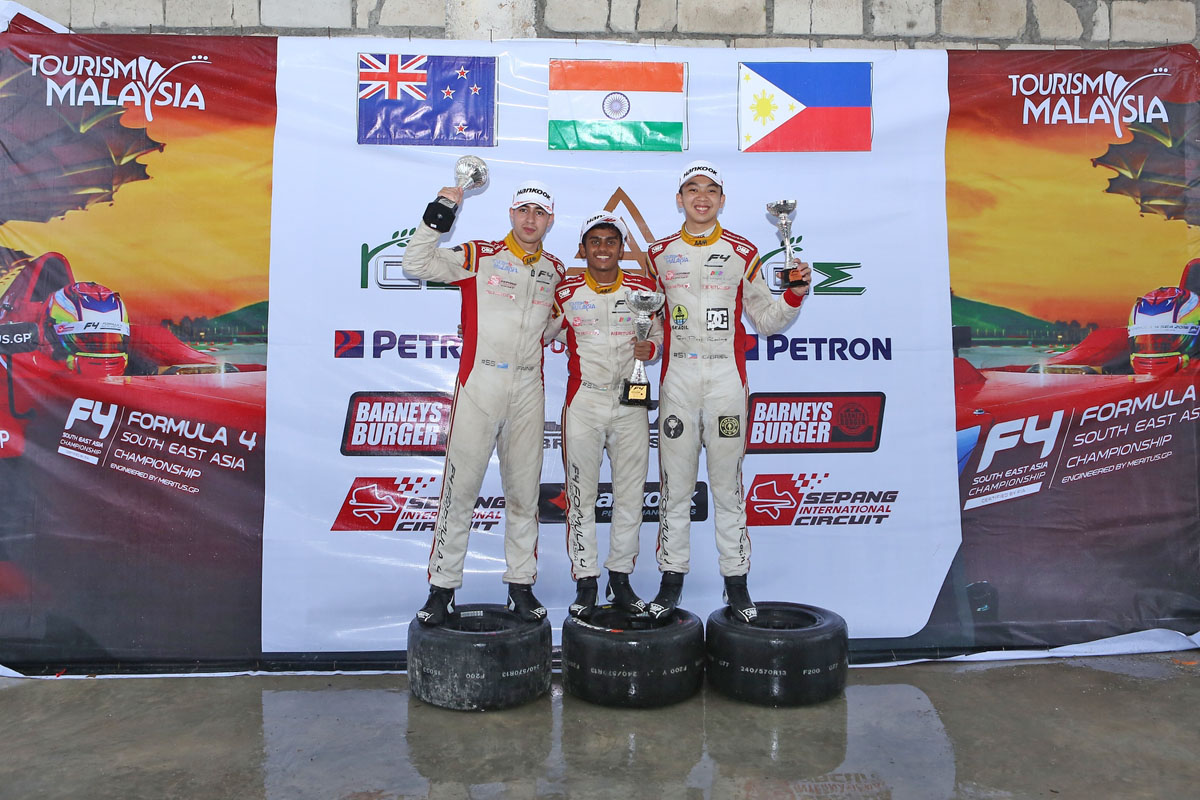 The second day of proceedings at the second event of the Formula 4 South East Asia (F4/SEA) Championship – certified by FIA at the Clark International Speedway commenced on Sunday with the remaining four races from the six scheduled. The final day was however dictated by the torrential downpour with the circuit at the mercy of a passing typhoon affecting the area. This resulted in the drivers having to negotiate the difficult wet conditions for the remainder of the six races.

Despite the challenging conditions, it was the local hero Gabriel Cabrera (PHI, Car #51) who prevailed to claim his first race victory on his debut in the F4/SEA championship in the early morning race. With the rain continuing unabated, the fourth race belonged to Indonesian Presley Martono (INA, Car #32) who made good on his pace to clinch his first race win of the season. Two-time winner from Saturday, Akash Gowda was in second ahead of Kiwi Faine Kahia (NZL, Car #55).

The accolades for the day’s fifth race belonged to Kahia who outwitted the competition with a superb start and successfully fended off the challenge from Martono who settled for second and home favourite Cabrera in third. The sixth and final race was postponed due to the worsening conditions, and will be rescheduled. With two race wins and a podium finish to his name, the Petron Star Driver Award for Event 2 of the F4/SEA Championship was awarded to India’s Akash Gowda.

Angie King (PHI, Car #12), P3 Race 3
“It’s great to be up here on the podium, which was quite unexpected especially in these difficult conditions. So, I kept my cool and decided to take it easy, and keep it together to the end. I am really happy!!”

Khalid Al-Wahaibi (OMN, Car #8) P2, Race 3
“Although we had a wet Race 2 yesterday, it was definitely harder today. So the focus was to stay calm, and yesterday’s result really boosted my confidence. I also had to focus on getting a good start and I was able to move up from P7 up to P4. There were also a lot of incidents involving other drivers but I managed to maintain my pace. All I thought about was to finish and not to push too hard and am happy to come home with second position.”

Gabriel Cabrera (PHI, Car #51), P1, Race 3, P3 Race 5
“To be honest, I was a bit scared running in this track in this condition. My only other experience was in Race 2 yesterday. So the focus was on the start and trying my best. I do like driving in the rain, I prefer it actually! So I managed to keep calm especially when I saw the others spinning off. I started in pole position for Race 5 but I did not have such a great start as I had a lot of wheel spin and dropped down to P5. I tried to recover and managed to get back up to P3 and from that point I kept my head down to try and finish with another podium.”

Faine Kahia (NZL, Car #55), Winner Race 5, P3 Race 4
“Finally! I am super stoked with getting this win! I have been waiting for a long time for this! I had a great start from P2 into the lead and tried to maintain a consistent pace and push as hard as I could while maintaining the gap to Presley (Martono). There were a couple of moments when Presley managed to close up on me, one of them was when I went a bit too deep into one of the corners and went wide and that let him close in on me. But I managed to hold it together, after that I kept my head down and keep the lead through to the end. In Race 3, I started in P3 and managed to overtake several guys at the start. The plan was to bring it home and that was my main focus, even though a few people overtook me. I am happy I managed to stay with the leaders, but in my view with conditions this difficult, it would be best to play it safe.”

Presley Martono (INA, Car #32), Winner Race 4, P2 Race 5
“I am really happy to finally get my first win in the Formula 4 South East Asia Championship. There were a lot of difficult challenges, especially in these really tricky weather conditions. At the same time, it was a lot of learning opportunities for me to find my limit in these challenging conditions. I did not have a good start and did fall behind but was able to find the rhythm and managed to make my way back up. There were a lot of intense moments when Akash (Gowda) tried to overtake me and when I tried to overtake Khalid. Unfortunately, he made a mistake and that allowed me to take the lead. After that, I had to defend from Akash, and am glad to finish on top! For once this weekend, I had a good start in Race 5, but Faine (Kahia) had a much better start. I thought about making a move but I also did not want to risk it. I did catch Faine but he closed the door on me. After that the conditions started to get quite bad. I am happy with P2 considering that I did not want to take big risks when the rain started to get heavy.”

Akash Gowda (IND, Car #33), P2 Race 4, Petron Star Driver Award for Event 2 Winner
“What an amazing weekend this has been for me! Admitted the conditions were really difficult with the heavy rains! I do enjoy racing in the rain but it was very difficult this weekend and very unpredictable. Overall I am really happy with the result, two wins and a podium in Race 4. In Race 4, I tried several times to close in on Presley (Martono) but he proved a difficult man to overtake! It was a really good race though. I would like to thank my coaches, the team and dedicate this to my dad who was here with me this weekend.”

Peter Thompson, Chairman Triple A
“A fantastic end to a great Event 2 here at the Clark International Speedway here in the Philippines. It was a huge success as the drivers really gave 110%. Although we were affected by the typhoon, racing in the rain also gives a chance for the drivers to gain valuable experience in these tricky conditions preparing for their futures. It was overall a great weekend with great support from the media and everyone involved.”

Firhat Mokhzani, Managing Director Triple A
“Overall it has been a successful weekend. Although the weather really threw the spanner into the works, on the positive side, the drivers did get a chance to develop their race craft in these especially tricky conditions. The racing has been close and exciting to watch with everyone making significant improvements. It really sets us up for what will be another thrilling third event.”