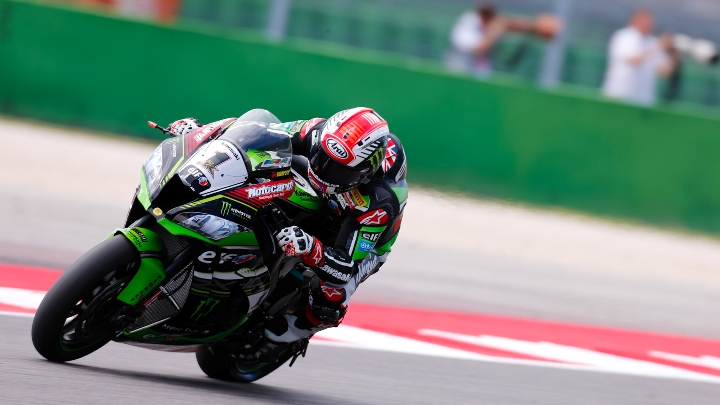 Mazda Raceway Laguna Seca is a legendary circuit in the true sense of the word. Although many of its contemporaries call to mind moments in history, trackside views or a list of high profile names to have made the tarmac their own, Laguna Seca is synonymous with its most famous corner: the Corkscrew. Host to some classic and season-defining overtakes and blind on entry, the Corkscrew is a corner to be conquered.

So what’s new as the WorldSBK paddock heads west to California? The fastest answer is Nicky Hayden. The 2006 MotoGP World Champion and rookie WorldSBK race winner is heading for the US track for the first time on his Fireblade, and anticipation is high to see the American legend in action.

As well as counting two MotoGP victories at the circuit, it also hosted the Kentucky Kid’s first win in AMA Superbike. The track suits the rider and the rider suits the track – added to home motivation for the former World Champion, fireworks could be on the cards. “Everybody is expecting miracles,” says Hayden, wary of the hype – but track records speak for themselves.

Jonathan Rea, after pinning down another double at Misano World Circuit Marco Simoncelli in Round 8, is sure to want to put himself up as one of the men in Hayden’s path. The reigning Champion and points leader is also conscious of the need for consistency however, having amassed his lead in 2016 through making sure he has ended each Race on the podium. An impressive feat, and with no previous wins at Laguna Seca sitting on a more than 60 point lead, Rea could roll the dice two ways: play it safe, or go for broke.

Rea’s teammate Tom Sykes had a solid weekend in Misano, and the newly re-signed KRT rider now finds himself clear in the chase for P2 in the points table ahead of Chaz Davies – but the gap to Rea grew once again. The season heads into the summer break after festivities conclude at Laguna Seca, and Sykes will be looking to go all-out for glory in California – having already won at the track twice before.

Chaz Davies will be another optimist as the Welshman heads long haul once again. The Aruba.it Racing – Ducati rider did the double at Laguna Seca in 2015, and will be eager to repeat the feat on a Panigale R that has moved forward even further. Furthermore Davies, after difficult weekends in Donington and Misano in terms of points scored, no longer counts on the freedom offered to his title rival Rea: the Ducati rider must walk the limit in his quest for the crown, beginning at Laguna Seca and sure to see the 2015 runner-up put everything behind starting to score those wins once again.

Honda’s Michael van der Mark could also play a role, having been back on the podium in Misano after some more difficult Rounds – as was Aruba.it rider Davide Giugliano. Althea BMW rider Jordi Torres qualified on the front row at Laguna on his rookie visit in 2015, boding well for the Spaniard, and will be hoping to head his key top ten rivals in the showdown in California – namely experienced MV Agusta rider Leon Camier and rookie Aprilia rider Lorenzo Savadori of IodaRacing, all of whom are fighting to go one further than fourth and get on the podium. Yamaha’s Alex Lowes will be fighting fit at Laguna Seca once again too – ready to push the Pata Yamaha project even further forward.

After a cable car tour of San Francisco gets the GEICO Motorcycle US Round underway on 6thJuly, free practice sees bikes tackle the Corkscrew for the first time in 2016 on the 8th before Hayden lines up to chase his American dream as the lights go out for two more spectacular WorldSBK Races at Laguna Seca.