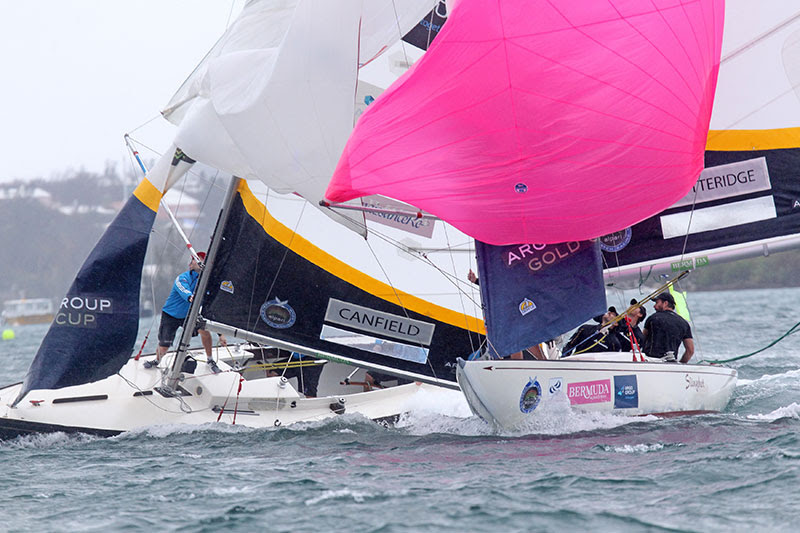 Conditions turned decidedly damp for the second day of racing at the Argo Group Gold Cup, stage six of the Alpari World Match Racing Tour. A front slowly crossing Bermuda brought with it an overcast sky and rain squalls. Nonetheless, despite squelching their way ashore completely soaked, the Group 2 crews enjoyed the morning’s stronger breeze, the wind less shifty having veered into the southwest overnight, blowing down Hamilton Harbour rather than across it.

At the close of play, with the competitors divided into two groups for Qualifying, 10 of the 12 flights have been completed in Group 2 and nine in Group 1.

This morning saw the wind gusting into the high teens, which was enough to make the classic International One Design yachts a handful for the crews, who struggled to prevent ‘death rolls’ and Chinese gybes. Unfortunately during one match, Lukasz Kacprowski, crewman for yesterday’s overall leader Marek Stanczyk, sustained a cut to his head after he was struck by the boom. He was subsequently taken to hospital and received stitches.

The most dramatic race of the morning was between Nathan Outteridge and Taylor Canfield. As the US Virgin Island skipper and defending Alpari World Match Racing Tour champion described it: “We were just behind coming on the first run and gybed on his breeze and probably the max puff of the day came in and we had a big windward heel, wipe-out situation as he started to luff us…” The result was the rigs of the IODs locking momentarily and a penalty for Canfield.

The two boats split at the leeward gate with Canfield taking the right and managing to plant a penalty on Outteridge for tacking too close, wiping his own penalty in the process. Outteridge made a last ditch attempt as the port tack boat to get in front coming into the top mark, but failed and was rewarded with a red flag penalty. Game over.

“It was good, the tightest race we’ve had all week,” commented Outteridge. “I think when it gets shifty one boat gets ahead but in that one, no one was ever clear ahead the whole way around.”

As to racing at both his first Tour event and first Argo Group Gold Cup, the 49er gold medallist from London 2012 added: “It’s been good apart from the weather, which was a bit average today. We are happy – we won a couple of starts today which was a good improvement. We are on the rise.” Sadly with a 4-5 scoreline, his team, representing Swedish America’s Cup challenger Artemis Racing, looks unlikely to make the Quarter Finals, strangely also true of the other America’s Cup team competing – Luna Rossa – defending champions here, which ended the day on a disappointing 2.5 points.

Among the success stories of the day was Mathieu Richard. “Coming from Brittany – we love the rain!” said the LunaJets skipper. “It is obviously better to sail in the sun – it is a bit different in the rain, because you can’t read the shifts on the water, but that is the same for everyone.” However the Frenchman’s mood was more due to winning all his three matches today: Yesterday he won just one.

Group 1 took over from Group 2 at lunchtime, coinciding with the rain stopping, the heavens clearing marginally, but the wind dropping below 10 knots.

GAC Pindar skipper Ian Williams won all his matches leaving him on 7.5 points with one race to sail tomorrow. “It was a little bit more straightforward today with the breeze in the west,” he said. “Not a great deal of excitement, but that’s how we like it!”

Fellow Tour Card holder, Bjorn Hansen was also unbeaten and now holds second in Group 1 to Williams. Being among the second group to have gone out today, the Swedish skipper was pleased to have missed the rain, sailing in this afternoon’s slightly brighter and more benign conditions on Hamilton Harbour. “I am extremely happy about that. The first group coming in looked a little bit wet!” he said.

In Bermuda Hansen is sailing with Danish match racer and stand-in tactician Rasmus Køstner, who is having to change gears, returning to the Tour from catamaran racing at the Extreme Sailing Series. “It feels good on board – everyone has found their roles and I think that we are sailing fast and we are making them right decisions,” said Hansen.

But the main memory of the day will be the soggy conditions. “I was saturated head to toe!” commented Taylor Canfield after he’d dried off. “But it was great breeze and that was all you could ask for. Hopefully we’ll have more of that tomorrow.”