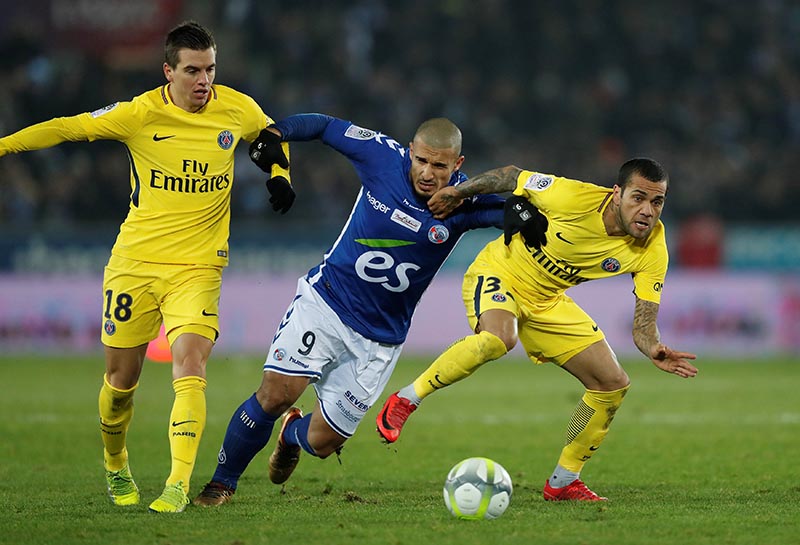 Nuno da Costa was an unlikely hero among the African players who starred across Europe’s top leagues over the weekend.

The Cape Verdean scored the first goal and created the second as lowly Strasbourg stunned star-stacked Paris Saint-Germain 2-1 at the weekend in the French Ligue 1.

It was the first league loss since April for a PSG team that includes Brazilian star Neymar.

The Cape Verde international is playing his first season of top-flight football — some of the other Africans who shone are better known.

The Ivory Coast striker bagged his first goal in more than a year, but it wasn’t enough to prevent Swansea losing 2-1 at Stoke. Bony netted in the third minute, beating Ryan Shawcross to Martin Olsson’s cross and blasting a fine volley past Jack Butland. It was his first goal since he scored twice against Stoke in the corresponding fixture in October 2016.

The Senegal forward scored his fourth goal of the season to fire Stoke to a 2-1 win over struggling Swansea. Diouf struck in the 40th minute when fellow attacker Peter Crouch won a heading duel on the edge of the penalty area and Diouf beat Kyle Naughton to the ball and volleyed into the top corner.

The Nigeria wing-back delivered an influential display as he returned from injury to make his first start for six weeks in Chelsea’s 3-1 win over Newcastle. Moses had suffered a hamstring injury in Chelsea’s defeat at Crystal Palace in October and he finally ended his long wait to return to action by playing the full 90 minutes of Chelsea’s comfortable victory at Stamford Bridge.

Moroccans Amrabat and El Zhar sent a warning of the damage they could cause Spain at the World Cup next year by combining to end Leganes’ four-game losing streak with a surprise 3-1 win over Villarreal. Amrabat came off the bench with Leganes trailing and made an immediate impact by setting up Diego Rico for the equaliser. El Zhar then calmly slotted home his first goal of the season before Amrabat grabbed his second assist of the game in stoppage time as Gabriel Pires rounded off the scoring.

Cameroon defender Nkoulou, 27, on loan this season from French club Lyon, turned goal scorer, heading in just before half-time only for Josip Ilicic to equalise for Atalanta, giving Torino a fourth straight draw to sit mid-table.

The Ghana midfielder broke Hertha Berlin hearts by firing home a superb winning goal for new club Eintracht in a 2-1 win in wintry conditions at the Olympic Stadium in Germany’s capital. The Berlin-born 30-year-old curled a superb shot into the top left-hand corner 10 minutes from time for his third goal of the season, but muted his celebrations having started his career at Hertha.

The France-born Moroccan international scored for the second time in as many games when he hit a superb second-half goal in Schalke’s 2-2 draw with Cologne. Having scored his first goal for Schalke in last weekend’s stunning 4-4 draw at Borussia Dortmund, the 20-year-old slotted home from close range to put Schalke 2-1 up on 72 minutes.

The once-capped Cape Verde international starred as promoted Strasbourg inflicted a first defeat since April on runaway leaders Paris Saint-Germain. The striker powered in a 13th-minute header after he was left completely unmarked from a free-kick. His flick-on then sent Stephane Bahoken racing clear to slam home Strasbourg’s winner on 65 minutes in a shock 2-1 victory.